With his career winding down, Yankees first baseman Mark Teixeira took some time to sit down with Ken Rosenthal of FOX Sports and reflect on his 14 seasons in the Majors. In an excellent Q&A, Teixeira discusses with Rosenthal the feeling of being traded on two different occasions, including an amusing story of a ruined cell phone on a fishing trip with former teammate David Dellucci that prevented him from learning about his trade to the Braves as quickly as he otherwise might have. The switch-hitting slugger candidly discussed his lone trip through free agency, stating that he “didn’t enjoy it at all” and also explaining how he very nearly signed with the division-rival Red Sox that winter before agreeing to terms with the Yankees. He also discusses the differences of being in a pennant race as an expected contributor and as a veteran role player. I’d highly recommend checking out Rosenthal’s piece, as it pulls back the curtain a bit on free agency and trades and also contains a number of interesting anecdotes from Teixeira.

Here’s more from the AL East… 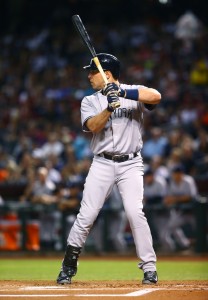 If first baseman Mark Teixeira and designated hitter Alex Rodriguez don’t turn around their seasons by the July All-Star break, the Yankees should buy the pair out, opines Joel Sherman of the New York Post. While the Yankees still owe them around $45.4MM combined, Sherman notes that the Rockies and Dodgers have taken similar financial hits with the recent buyouts of Jose Reyes and Carl Crawford. The 37-36 Yankees wouldn’t exactly be loaded with capable first basemen without Teixeira, though, as their depth chart shows. Jettisoning A-Rod, who’s signed through 2017, would enable the Yankees to put 39-year-old Carlos Beltran at DH and go with some combination of Aaron Hicks, Rob Refsnyder and prospect Aaron Judge in right field, Sherman contends. It seems doubtful that the Yankees would get rid of either, but the team clearly needs more production from the veteran duo. Teixeira, a pending free agent, is batting a horrendous .176/.271/.259 with three homers in 192 plate appearances – a far cry from the .255/.357/.548 line and 31 HRs he slugged in 462 PAs last year. Notably, Rodriguez is five homers shy of 700, which is another reason the Yankees look unlikely to move on from him. The 40-year-old is slashing a weak .222/.264/.398, however, after posting a .250/.356/.486 line and racking up 33 long balls in 2015.

Here’s more from around the majors:

Teixeira is making a quick return after hitting the DL earlier this month with a cartilage tear in his knee. It was initially believed that the injury could require surgery, but Teixeira returns to the Yankees after just three weeks.

The quick return is fortuitous for the Yanks, too, even though Teixeira has struggled this season, batting just .180/.271/.263 so far. The Yankees struggled to find first base help after a series of injuries to Teixeira, Greg Bird, Dustin Ackley and Chris Parmelee, leading them to sign Davis two weeks ago. The veteran played sparingly, batting 3-for-14. As Murti notes, a key to the decision to let Davis go was the play of Rob Refsnyder, who has now appeared in 16 games at first and has batted .286/.339/.393 in 63 plate appearances this season. Via Newsday’s Erik Boland (on Twitter), Davis indicates he might be willing to accept an assignment to Triple-A if he clears waivers.

The Red Sox have inquired about high-end starting pitchers like the Marlins’ Jose Fernandez and the Pirates’ Gerrit Cole this season, but Boston has unsurprisingly balked at sending back shortstop Xander Bogaerts or right fielder Mookie Betts, a source told Michael Silverman of the Boston Herald. With a rotation whose ERA (4.66) and K/BB ratio (2.4) are both below average, the Red Sox are looking for starters who can help them “in the present or the future,” a source informed Silverman.

More on both Boston and its archenemy:

Yankees first baseman Mark Teixeira, who went on the disabled list last Saturday with a cartilage tear in his right knee, is progressing toward a return and expects to start running next week, he told Randy Miller of NJ Advance Media. Teixeira didn’t reveal when he could rejoin the Yankees, but the fact that it’s a possibility is undoubtedly welcome news for him and the team. The fear when Teixeira suffered the injury was that he’d need surgery. As of now, though, it appears the 36-year-old will avoid going under the knife. In addition to Teixeira, the Yankees have recently lost two other first base options – Chris Parmelee and Dustin Ackley – to injuries.

Here’s more on some big-name players dealing with health troubles:

While Padres righty Tyson Ross is progressing through his throwing program, he is not expected to make it back until after the All-Star game, AJ Cassavell of MLB.com tweets. The expectation is that Ross will begin throwing bullpens in a few weeks, and his timeline should gain more clarity once he reaches the mound. A return in mid-July could in theory put him in play at the trade deadline, but it seems increasingly likely that Ross won’t be shopped until after the season.

10:53am: Brian Cashman says Teixeira’s injury is a significant one that could require surgery, Lohud’s Chad Jennings writes. Cashman says that the Yankees will have Teixeira rest the knee and could treat it with injections. If it does not improve, Teixeira could have surgery, which would likely end his season.

Cashman also says the Yankees tried to recruit James Loney, now with the Mets, at the end of Spring Training. “We had a conversation with Loney at the end of spring training, and at that time Loney was unwilling to go to Triple-A,” Cashman says. Loney would have given the Yankees a veteran first base option in the wake of Teixeira’s injury.

9:12am: The Yankees have announced that they’ve placed first baseman Mark Teixeira on the 15-day disabled list with a cartilage tear in his right knee. To take his place on the active roster, they selected the contract of veteran 1B/OF Chris Parmelee. They also transferred Dustin Ackley (shoulder) to the 60-day DL.

As we noted yesterday, Teixeira left yesterday’s game with right knee pain, and he received an MRI. The 36-year-old has struggled thus far this season, posting a .180/.271/.263 line while also dealing with a lingering neck issue. His 2016 has been a far cry from his performance last year, when he batted .255/.357/.548 while hitting a remarkable 31 home runs in 462 plate appearances.

With Teixeira (and Ackley) on the shelf, Parmelee, who was batting .252/.343/.444 with Triple-A Scranton, could take over a fair amount of playing time at first, perhaps along with Rob Refsnyder, although Refsnyder lacks experience at the position. (The team has elected to keep veteran slugger Nick Swisher, another potential first base option, at Triple-A after a slow start there.) Along with Teixeira, the Yankees are also missing Greg Bird, who is out for the season with a torn labrum.

Alex Rodriguez is back in the Yankees’ lineup after a quick rehab stint, but fellow veteran slugger Mark Teixeira is still out. It remains to be seen whether Teixeira will eventually require a DL stint, but for now he’s simply taking some time and waiting for a cortisone shot to take effect, as MLB.com’s Bryan Hoch tweets. An MRI seemingly cleared him of any new neck issues, ESPNNewYork.com’s Andrew Marchand tweets, so it seems to be an optimistic outlook. Meanwhile, the Yanks have placed southpaw Chasen Shreve on the DL while his left shoulder is checked out, Hoch also tweets.