MLB player chats are back!  Last year, MLBTR readers chatted with 13 different former and current MLB players, and it was a blast.  This year, we’ve got more than 25 on tap.  If you’re a former or current MLB player, we’d love to host you for a chat!  It’s a great time, and you get to choose which questions you publish and answer.  Click here to contact us.

Today’s chat guest, pitcher Mickey Jannis, is a study in perseverance.  Mickey was drafted by the Rays in the 44th round out of California State University, Bakersfield – a draft round that doesn’t even exist anymore.  By 2012 he found himself in independent ball, at which point he converted to a knuckleball pitcher.  After grinding it out for four years with teams like the Lake Erie Crushers, Bridgeport Bluefish, and Southern Maryland Blue Crabs, Jannis managed to land a minor league deal with the Mets. 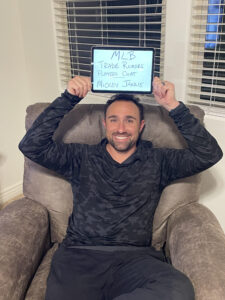 Jannis honed his craft for three years in the Mets organization, reaching Triple-A.  He then inked a deal with the Orioles, only to see the minor league season cancelled in 2020.  Jannis stuck with the O’s, and was rewarded with his lone big league opportunity to date in 2021.  On June 23rd, 2021 at Camden Yards, Jannis entered the losing side of a 6-0 game against the heart of the Astros’ order.  His first opponent was the dangerous Yordan Alvarez, and Jannis caught him looking.  Though Jannis was not able to make it through the rest of the outing unscathed, he’d made it to the big leagues as a 33-year-old rookie knuckleballer after 12 years of minor league baseball.

19 months later, Jannis remains the last knuckleballer to pitch in the Major Leagues.  The knuckleball is a lonely road and often a last resort for a pitcher, but this spinless wonder has given us multiple Hall of Famers and All-Stars.  The most recent major success with the pitch was R.A. Dickey, who won the NL Cy Young award in 2012 and pitched successfully through 2017, his age-42 season.

MLB teams haven’t cracked the code on the knuckleball, and most seemingly have not figured out a way to teach the pitch.  Who knows, maybe the pendulum will swing and the lowest possible spin rate will become the new market inefficiency.  For Mickey Jannis’ sake, we’d love to see it.  As Mickey puts it, he’s “currently working out for teams, trying to keep the knuckleball alive!”  You can follow him on Twitter and Instagram @mickeyjannis.

Today, Mickey answered questions from MLBTR readers for over an hour.  Click here to read the transcript.

The Orioles announced that right-hander Mickey Jannis has cleared waivers and been sent outright to Triple-A Norfolk. He’d been designated for assignment earlier in the week.

Jannis will remain in the organization as high minors depth. The 33-year-old has had a strong season with the Tides, working to a 2.92 ERA across 24 2/3 innings. His strikeout and walk rates (13% and 10%, respectively) are uninspiring, but that’s generally to be expected for a knuckleballer.

That quality Triple-A work earned Jannis the briefest of looks at the big league level earlier this week. He was selected to the roster and made his MLB debut on Wednesday. Jannis was called on for a few innings of mop-up work against the Astros, the league’s top lineup. He didn’t fare well, as Houston tagged him for seven runs on eight hits (including three homers) and four walks. At the very least, Jannis did record his first major league strikeout, punching out Yordan Álvarez.

Jannis was just selected to the major league roster earlier this week. The 33-year-old made his MLB debut Wednesday night against the Astros, but it didn’t go well. He worked 3 1/3 innings of mop-up relief but was tagged for seven runs on eight hits (including three homers), issuing four walks while striking out just one. It was a nightmare outing to be sure, but it also came against a Houston lineup that has been far and away the best in baseball this year. Before that tough debut, the knuckleballer earned a big league look by pitching to a 2.92 ERA in 24 2/3 innings with Norfolk. The O’s will have a week to trade him or place him on waivers.

The designation of Jannis frees up Wade to make a late-career MLB debut of his own. A 7th-round pick out of the University of Arizona in 2013, Wade has spent the past seven seasons climbing the minor league ladder. Most of that time was spent in the Rockies and Red Sox systems, but the 29-year-old signed a minor league deal with Baltimore over the winter. He’s spent the entire year in Norfolk, where he’s tossed 31 innings of 3.48 ERA ball, mostly as a multi-inning reliever. Wade has never been one to miss many bats, and that hasn’t changed this year (16.4% strikeout rate). But the righty also has a long history of quality strike-throwing, and that’s continued in 2021 (4.9% walk rate).

Kremer has spent much of the year in the O’s rotation. He’s struggled mightily, though, pitching to a 7.25 ERA with worse than average strikeout and walk numbers (20% and 10.7%, respectively) over 49 2/3 innings. That’s a disappointing follow-up to a decent four-start MLB look in 2020 for Kremer, who’s long been seen as one of the more promising pitchers in the Baltimore system.

Wells is a decently-regarded prospect in his own right. The 24-year-old doesn’t throw hard or miss bats, but he owns some of the best control in the minors. He has a 5.63 ERA across 32 Triple-A frames this season. Wells will be making his major league debut whenever he gets into a game.

Jannis’ promotion will be welcome news to fans of a unique pitch that has fallen out of vogue in recent seasons. The 33-year-old is a knuckleballer, and he’ll become the first of that ilk to appear in the majors in 2021 if he gets into a game. According to Statcast, there have been twelve knuckleballs thrown in MLB this season, but they come with an asterisk. All twelve “knucklers” were thrown by White Sox utilityman Danny Mendick during a mop-up appearance against the Red Sox in April. (Jannis was featured in a 2019 article about the league’s declining usage of the knuckleball by Ben Lindbergh of the Ringer).

Today’s news also marks the culmination of a long personal journey for Jannis. A 44th-round pick in 2010 out of Cal State-Bakersfield, he’s pitched in parts of eight minor league seasons and four years of independent ball. He reached Triple-A in the Mets system but didn’t get to the majors with New York. Signed to a minors pact with Baltimore over the winter, Jannis earned his first big league promotion with a strong start at Triple-A Norfolk. Across 24 2/3 innings with the Tides, he’s pitched to a 2.92 ERA. As might be expected from a knuckleballer, he hasn’t missed many bats (13% strikeout rate) and has issued a fair amount of walks (10%) but he’s only given up one home run this season.

Sceroler, 26, was selected out of the Reds organization in last December’s Rule 5 draft. He’s logged his first 7 2/3 MLB innings in 2021, but they’ve not gone well. Sceroler has been tagged for fifteen runs (twelve earned) in that limited time. He’s punched out a decent eleven hitters but also issued seven walks and given up a staggering six homers.

As a Rule 5 draftee, Sceroler had to stick on the active roster (or injured list) all season if the O’s wanted to retain his contractual rights. He’ll now be exposed to waivers. If he goes unclaimed, Baltimore will have to offer him back to the Reds, who wouldn’t need to dedicate him a 40-man roster spot.