Royals infielder Rafael Furcal has decided to retire, Jeffrey Flanagan of MLB.com reports on Twitter. The 37-year-old had been attempting a comeback bid in the Kansas City organization.

Furcal, who hails from the Dominican Republic, signed with the Braves as an amateur free agent in 1996. He hit the big leagues with Atlanta at age 22, won the Rookie of the Year Award, and ultimately spent six years there and another half dozen with the Dodgers during his prime.

Furcal posted nearly-identical batting lines over each of those stints — .283/.351/.406 in Atlanta, .284/.348/.409 in Los Angeles — though he obviously had some ups and downs over his first twelve years. Possessing surprising pop for his size, Furcal hit over 100 big league long balls and put up four-straight double digit campaigns.

One thing that never seemed to waver much was Furcal’s value on the bases and in the field. Both Fangraphs and Baseball-Reference credit him with better than thirty career wins above replacement, in spite of an approximately league-average bat, based upon those contributions. Furcal ultimately topped three hundred career steals.

Furcal’s later career was marred by injury. After joining the Cardinals in the middle of the 2011 campaign, he put up a solid .262/.323/.367 batting line in 748 plate appearances for St. Louis. But he was forced out of action late in the tam’s 2012 World Series run with a UCL sprain, and ultimately underwent Tommy John surgery that caused him to miss all of the following year.

Though the elbow injury did not prevent Furcal from making a run at a return, he made just 37 trips to the plate with the Marlins last year before hamstring issues ended his season. That leg muscle apparently let him down again in his more recent bid with the Royals, as Flanagan tweets that Furcal decided to call it quits after another hamstring problem arose.

All said, the somewhat disappointing end to his career does not mar its excellence. At his best, Furcal was among the most productive players in the league, and he was at least an above-average regular for much of his career. MLBTR extends its best wishes as he turns the page.

It appears that the move was designed to get Furcal in camp when he signed initially while preventing the Royals from being obligated to him for a $100K Article XX(B) retention bonus. Furcal does not appear on the list of Article XX(B) free agents I compiled recently, because he signed after that list was posted, but he did in fact qualify for free agency pursuant to that provision and therefore was entitled to its built-in protections.

The Royals have released infielder Rafael Furcal, Andy McCullough of the Kansas City Star reports on Twitter. Furcal was only recently brought into camp on a minor league deal and had been working through a hamstring injury.

The 37-year-old saw only minimal action last year with Miami and has generally been unable to stay healthy since going down with a UCL tear late in 2012. He had been a consistent and reliable presence in the middle infield to that point.

It is unclear whether Furcal will seek another opportunity. Over his productive career, Furcal has slashed .281/.346/.402 in 7,237 plate appearances with 113 home runs and 314 steals. He has been worth more than thirty wins above replacement in total.

WEDNESDAY: Furcal will receive $1.25MM if he’s in the Majors, plus $250K in incentives, Jon Heyman of CBS Sports tweets.

MONDAY: The Royals and infielder Rafael Furcal have agreed to a minor league contract, per Andy McCullough of the Kansas City Star (on Twitter). Furcal, a client of the Kinzer Management Group, isn’t with the team in big league camp and is instead rehabbing in minor league camp, McCullough adds.

The 37-year-old Furcal signed a one-year deal with the Marlins last offseason with the expectation that he could play second base for them, but hamstring injuries cost him all but nine games of the 2014 season. Furcal, who missed the 2013 season due to Tommy John surgery hit just .171/.216/.229 in 37 PAs with the Fish last season. His last regular action came with the Cardinals in 2012 when he batted .264/.325/.346 with five homers and a dozen steals.

Furcal re-tore his problematic hamstring this offseason and missed the playoffs in the Dominican Winter League, so he’ll need to rehab from that injury before receiving a chance to crack Kansas City’s roster. The signing makes some degree of sense, however, as Omar Infante is battling elbow issues and struggled in 2014 anyhow. Indeed, MLBTR’s Tim Dierkes noted back in December (via Twitter) that Furcal could be a fit for Kansas City, especially since he came up through the Braves organization back when Royals GM Dayton Moore was working in Atlanta’s scouting and player development departments.

The Mariners have unfinished business heading into the new year, Bob Dutton of the Tacoma News Tribune writes. They’ll need to find a platoon partner for righty Justin Ruggiano in right field, with Seth Smith of the Padres as one possibility. They could also move Brad Miller to the outfield if he loses the shortstop job to Chris Taylor. The M’s could also find a catcher in the Humberto Quintero mold to provide depth at Triple-A Tacoma. Here are more notes from around the big leagues.

Discussing his wide-ranging moves since taking over as the Dodgers president of baseball operations, Andrew Friedman said today that he sees the club as a “highly functional baseball team, instead of a collection of talent.” As MLB.com’s Ken Gurnick reports, Friedman says the club will remain “open-minded” about dealing away from its stock of outfielders.

Free agent infielder Rafael Furcal could be a fit for the Royals on a minor league deal thanks to his connection with GM Dayton Moore, according to Tim Dierkes of MLBTR (via Twitter).  Here are some of the latest free agency rumors out of San Diego..

Despite reports that Terry Collins is likely to reprise his role as Mets manager in 2015, Joel Sherman of the New York Post gets the sense that a change of skipper is a definite possibility in Queens. Sherman writes that the final six weeks are critical to determining whether or not Collins will return. He explains that the Mets’ upper management believe that plate discipline and power are the key to scoring runs, but the Mets rank 26th in walks in the second half and dead last in the Majors in walks this month. Those trends will have to change, writes Sherman, in order for Collins to remain. As it stands, there is a slight lean toward bringing Collins back, he states, but Sherman feels that Collins needs to demonstrate to his bosses that he is able to consistently emphasize the organizational philosophy.

The Rays have claimed right-hander Angel Sanchez off waivers from the Marlins, tweets Mark Topkin of the Tampa Bay Times. The Marlins have announced that the move will clear a 40-man roster spot for Rafael Furcal to be activated from the DL and reinstated to the big league roster. Sanchez will head to Double-A Montgomery for the Rays.

Sanchez, not to be confused with the infielder of the same name who inked a minor league deal with the Dodgers earlier today, is a 24-year-old right-hander out of the Dominican Republic. He is one of three pitchers that the Marlins acquired from the Dodgers in exchange for Ricky Nolasco and cash last season (the roughly $6MM of salary relief was the bigger concern for Miami in that transaction). In 12 starts at Double-A Jacksonville this season, Sanchez posted a 6.88 ERA with 5.2 K/9 and 3.1 BB/9 in 52 1/3 innings.

Furcal, who signed a one-year Major League deal with the Fish this offseason, will bat leadoff in tonight’s game for the Marlins — his first big league action since 2012 with the Cardinals. He batted .264/.325/.346 in 531 plate appearances for St. Louis that season. A three-time All-Star and former NL Rookie of the Year (2000), Furcal is a career .281/.346/.403 hitter in parts of 13 Major League seasons with the Braves, Dodgers and Cardinals. 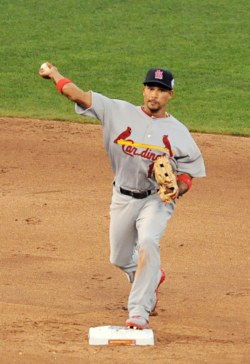