The lack of a contract extension between the Red Sox and Jon Lester now presents the possibility that this could be Lester's last Opening Day with the team, writes Scott Lauber of the Boston Herald. Lauber adds that the season will now be rife with speculation regarding Lester's contract situation and opines that a strong performance out of the 30-year-old lefty could make the Red Sox regret not presenting Lester with a "Scherzer-like offer" (six years, $144MM) when all is said and done. Of course, that deal would hardly represent the discount to which Lester has previously referred.

Here are some more notes on Lester, the Red Sox, and the AL East…

Baseball, like the rest of the country, has its mind on yesterday's tragedy at the Boston Marathon. SI.com's Tom Verducci explores the role of the national pastime — and, especially, Boston's own Red Sox — in dealing with an event of such magnitude: "Every tragedy is … an unwelcome reminder that life goes on for the survivors. Baseball, which, unlike any other sport, is there for us virtually every day, is entwined with what is the comfort and curse of that daily challenge. However small, however unimportant baseball seems today, the Red Sox remain a part of daily life in Boston. These Red Sox, win or lose, now play for a broken city. Whatever comfort or distraction they provide in the best of times assumes a different weight in these worst of times."

The Orioles made a surprising playoff run in 2012, but SB Nation's Rob Neyer can see why people question their ability to repeat. He argues that the Orioles were merely average in terms of runs scored and runs allowed in 2012, and expecting players like Brian Roberts and Nolan Reimold to perform better than they have in years is going to invite critics. Here's more out of the AL East…

Indians CEO Paul Dolan explains his team's thought process following a 68-94 season in 2012 and says that a total rebuild was not an option, Terry Pluto of the Cleveland Plain Dealer reports. "None of us wanted to think about tearing it down. Our goal is to put together a team to win a World Series. Another goal is to avoid 20 years of losing, which some smaller-market teams have endured." The Indians did trade outfielder Shin-Soo Choo, but rather than also dealing veterans like Asdrubal Cabrera, Chris Perez and Justin Masterson, the team spent heavily on free agents like Michael Bourn and Nick Swisher. Here are more notes from Pluto's interview with Dolan.

The Nationals had their eye on left-hander J.P. Howell for quite some time but the Dodgers swooped in on him earlier today.  After losing three lefties in Tom Gorzelanny, Sean Burnett, and Michael Gonzalez, the Nats could still add a southpaw, tweets Ken Rosenthal of FOX Sports.  Here’s more out of the AL and NL East..

The Red Sox remodeling project continued today, as they announced they have signed Shane Victorino to a three-year contract.  The 32-year-old, a client of John Boggs & Associates, slipped this year to a .255/.321/.383 line for the Phillies and Dodgers, but still did well in free agency, obtaining a $39MM guarantee. 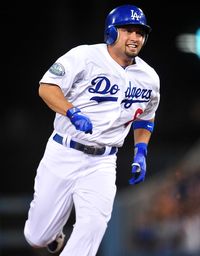 Victorino will play right field for the Red Sox, who previously signed Mike Napoli to play mostly first base, Jonny Gomes to play left field, and David Ross to help behind the plate.  With Jacoby Ellsbury returning to play center field, Boston's outfield appears set, so the door is likely closed on free agents Cody Ross, Nick Swisher, and Josh Hamilton.  As Speier explains, Victorino "fits the profile that the team seeks of an above-average defensive outfielder capable of playing both right and center at Fenway Park."

The Indians, Cubs, and Yankees reportedly had some degree of interest in Victorino, MLBTR's #12 free agent.  The Tribe offered four years and $44MM, tweets Ken Rosenthal of FOX Sports.

The latest from around the AL Central…

4:01pm: Things are "moving fast" on the Victorino front, with the Sox in a good position to finalize a deal, says ESPN.com's Jerry Crasnick (Twitter link). Gordon Edes of ESPNBoston.com adds (on Twitter) that nothing is done yet, but that it's getting close.  Victorino has at least one four-year offer from a different team, notes Jon Heyman of CBS Sports.

3:25pm: Ken Rosenthal of FOX Sports clarifies (via Twitter) that the exact terms of the Red Sox offer are three years at $37.5MM. There's optimism that the two sides will get a deal done at that price, says Cafardo (via Twitter).

3:09pm: The Red Sox are the frontrunners on Victorino, having offered a three-year deal worth $38MM, according to Nick Cafardo of the Boston Globe (via Twitter).

3:02pm: There are two teams "fully engaged" in talks with Victorino, including the Indians, tweets Bob Nightengale of USA Today. It's not clear whether the other club involved is the Red Sox or the aforementioned "mystery team."

2:27pm: Victorino appears to have narrowed his options to three teams, tweets Jon Heyman of CBSSports.com. The Indians and Red Sox remain in the mix, along with a third club. That third suitor isn't a true "mystery team," says Heyman — it's just unknown to him.

12:02pm: Momentum is building in talks for free agent outfielder Shane Victorino, according to ESPN.com's Jerry Crasnick, who tweets that a deal could be finalized during the Winter Meetings. Crasnick reports (via Twitter) that the Indians have emerged as a "prime suitor" for Victorino, with manager Terry Francona reaching out personally to the Flyin' Hawaiian earlier in the offseason.

Besides the Indians, other teams checking in on Victorino include the Red Sox, Cubs, and Yankees, says Crasnick (Twitter link). The Braves and Reds don't appear to be engaged in discussions, and the Phillies' interest is "tepid," according to the ESPN.com scribe.

Crasnick adds in a final tweet that Angel Pagan's and B.J. Upton's deals appear to be helping Victorino, who should be in line for a three- or four-year contract. Upton earned a five-year, $75MM deal from the Braves, while Pagan agreed to a four-year, $40MM contract with the Giants yesterday.

We checked in on the AL East already this morning, so let's head to the National League to round up the latest out of the NL East….