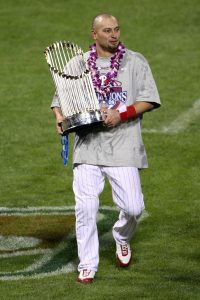 Here are the highlights from this week’s notes piece by Nick Cafardo of the Boston Globe:

The details of the new bonus pool system for the 2017-18 July 2 class of international prospects has been reported by Baseball America’s Ben Badler, who provides a recap of how the July 2 market has been altered under the new collective bargaining agreement.  All teams have been assigned bonus pools of either $5.75MM, $5.25MM or $4.75MM, based on their revenues and market size.  Here’s more from around the game as news continues to pour in from the Winter Meetings…

Longtime Phillies outfielder Shane Victorino sat down for a lengthy Q&A with Ryan Lawrence of PhillyVoice.com and covered a great number of topics, including career highlights, his favorite teammates and places to play, his memories from the Phillies’ World Series run and also his future in the game of baseball. The whole Q&A is worth a read for Phillies fans and Victorino fans alike, but it’s worth noting that Victorino wouldn’t officially close the door on a return to baseball if there’s interest. He tells Lawrence:

“Yeah, I mean I still have a love for the game. Don’t get me wrong, I don’t think that will ever leave you. But you know there are things you think about and decisions you have to make. Family comes into the equation. Being there for my kids, finally being away for the game this past season I saw the significance of being a dad and what that means. Understanding being a kid myself. But circumstances were different. My parents weren’t always around because they had to work to make ends meet. Where if I’m not around I’m just playing a game. So that’s the balance I’m trying to figure out. But, yes, there are things that I’ll weigh. The game of baseball, and my love for the game. It’s still there. I’d love the chance to come back and play, but that answer is not etched in stone.”

The 2016 season marked the first year since 2004 in which Victorino did not appear in the Major Leagues. The affable switch-hitter did open the season with the Cubs’ Triple-A affiliate after signing a minor league deal, though he appeared in just nine games, as reports early in the season indicated that the Cubs told Victorino they’d make a quick decision on him and whether he was a fit for the big league roster. The Cubs released Victorino in May, and in June it was reported by FanRag’s Jon Heyman that the 35-year-old Victorino had rejected some minor league offers.

It seems unlikely that Victorino would receive anything other than a minor league offer after sitting out the vast majority of the 2016 season, though perhaps he’s more amenable to attempting to break camp with a big league team than he was trying to crack a roster midway through the Major League campaign. That’s a decision for Victorino to make with his family though, and perhaps one that he may not prefer to make until surveying the offseason market and gauging the level of interest in his services.

Jon Heyman of Fan Rag’s latest notes column begins with a lengthy examination of a resilient Dodgers team. He also drops a note on the demoted Yasiel Puig, who is not only demolishing Triple-A pitching, but is drawing great reviews for his attitude. Heyman reported further on Puig earlier today, explaining that the Dodgers have fielded interest in trade talks, but mostly have been spurning efforts by rival organizations to get him on the cheap.

Writing at todaysknuckleball.com, Jon Heyman breaks down the woes of the Dodgers and Angels. Both teams face difficult decisions over the summer. The Dodgers, at least, still seem positioned to contend and could play an interesting role on the trade market.

Here are more notes from the column:

In regards to Brewers left fielder Ryan Braun’s potential availability this summer, one American League executive told Nick Cafardo of the Boston Globe, “That’s the name I’m waiting for.” Braun is in the first season of a five-year, $105MM extension, and both the money he’s owed and his PED history are roadblocks standing in the way of a possible deal, reports Cafardo. The writer adds that the quality of return in a hypothetical Braun trade will come down to how much of his contract Milwaukee eats. The 32-year-old has dealt with injuries this season, but he has still slashed an outstanding .316/.378/.541 with 11 home runs through 217 plate appearances.

More from the Boston-area insider:

The Cubs have released outfielder Shane Victorino from their Triple-A roster, reports Carrie Muskat of MLB.com (via Twitter).

Victorino, 35, signed a minor league contract with Chicago in Spring Training and, as of a May 11 update from the Des Moines Register, was told that he would be evaluated within a few weeks. It would seem that the Cubs have made their decision in that time or, perhaps, that Victorino exercised an opt-out provision in his deal. The veteran batted .233/.324/.367 in nine game/34 plate appearances in his brief time with the Cubs’ Triple-A affiliate and is now free to pursue an opportunity with another organization.

Back in Spring Training, Victorino at least acknowledged the possibility of retirement, though he was clear at the time that his desire was to continue playing the game he holds so dear to his heart. Said Victorino to Ken Rosenthal of FOX Sports at the time: “I am my hardest critic, so if I feel like I am done, no one would need to make that decision for me.”

Victorino returned to switch-hitting this offseason after hitting only right-handed in 2015. He’s a career .270/.340/.425 hitter in 1299 big league games and has a pair of All-Star nods under his belt as well as four Gold Glove Awards.

Every player has different priorities, many of which go beyond maximizing earnings, though that’s not always easy to discern from publicly available information. Ken Rosenthal of FOX Sports provides an interesting recent example, though, in Jason Hammel of the Cubs. The right-hander and his wife were disappointed to be dealt away from Chicago at the trade deadline in 2014, with Hammel telling Cubs president of baseball operations Theo Epstein that he would “pitch well enough that you bring me back” even as he departed for the A’s. Though Hammel wasn’t as good in Oakland as he had been before the deal, that’s just what happened, as Hammel inked a two-year, $18MM deal in the offseason. It looked like a nice value for the team at the time, and the veteran has rewarded the Cubs with 204 2/3 innings of 3.43 ERA pitching since his return.