The Dodgers spent aggressively on veteran free agents and locked up their top position player in their final offseason under the ownership of Frank McCourt.

Going from Frank McCourt to Magic Johnson and Stan Kasten represents the biggest upgrade of the offseason for the Dodgers. McCourt agreed to sell the Dodgers to a group including the NBA star and the longtime MLB executive for $2.15 billion. The change in leadership promises to turn the Dodgers into a West Coast superpower capable of outdrawing, outspending and outplaying the competition. 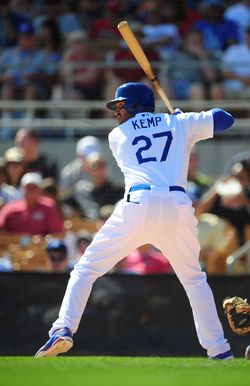 The team also has some hope in the short-term, even though Dodgers GM Ned Colletti didn't add much star power to the roster this winter. Toward the end of the 2011 season, Colletti said he was hoping to find "the most dramatic way [to] improve the offense" this offseason. The Dodgers appear to have offered Prince Fielder a seven-year deal in the $160MM range and, were it not for the torn ligament in Victor Martinez's knee, Fielder might have signed in Los Angeles. Instead, the Dodgers signed a number of veteran position players to deals that will fill out the lineup without radically improving the offense.

The Matt Kemp extension was Colletti's biggest offseason accomplishment. They're paying him like a superstar, but Kemp (pictured) earned his $160MM after putting up MVP-caliber numbers in 2011. While 2011 was in all likelihood a career-year, it was no fluke. The deal will expire after Kemp's age-34 season, so the Dodgers locked him up for his prime seasons. Not all teams can afford to make $160MM commitments, but the Dodgers can and should retain their elite players.

The Dodgers also extended Clayton Kershaw, but his contact couldn't be much more different from Kemp's in terms of magnitude and purpose. Kershaw's two-year, $19MM contract should provide the Dodgers a discount on the left-hander's 2013 salary, but it doesn't lock him up through any free agent seasons. For me this type of deal favors the player, not the team. The Dodgers will worry about delaying Kershaw's free agency with his next extension, when they discuss a potentially record-setting contract one or two years from now.

Joining Kershaw in the rotation are Aaron Harang and Chris Capuano. The pair cost $22MM in total, which is a lot for back-of-the-rotation pitchers. But there's value in innings eaters and Nathan Eovaldi will still get the chance to start his share of games if an injury emerges. It's surprising the team let dependable right-hander Hiroki Kuroda walk, since he offers more upside than Harang or Capuano and seemed interested in returning to Los Angeles.

Mark Ellis signed a two-year, $11MM that provides the Dodgers with a steady defender at a premium position. The Dodgers are counting on the 34-year-old for his glove and if replicates his career line of .266/.331/.397 it'll be a bonus. This deal doesn't have much upside, but going with Ivan De Jesus Jr. would have been risky. A veteran addition was in order and given the free agent options, the decision to sign Ellis seems defensible.

Juan Rivera, a low-OBP 33-year-old who's losing his power, signed a $4.5MM deal with the Dodgers early on in the offseason. Rivera has been below replacement level in three of the past five seasons, according to Baseball Reference's version of the metric, so Jerry Sands, a powerful 24-year-old earning the league minimum, seemed like the better, cheaper choice.  Even if the Dodgers don't believe in Sands quite yet, more affordable ways of obtaining below average hitters with minimal defensive value exist.

Jonathan Broxton left via free agency and if the Dodgers were at all tempted to spend big on a replacement closer, they resisted, choosing instead to rely on internal candidates and make modest additions to the 'pen. The Dodgers signed Todd Coffey and re-signed Mike MacDougal to deals that should strengthen the bullpen for a relatively low price. Most teams enter the season with more left-handed relief than the Dodgers, who are hoping Scott Elbert can build on a promising 2011 season.

The club also added veteran backstops Matt Treanor and Josh Bard to complement the high-OBP duo of A.J. Ellis and Tim Federowicz. The additions of Jerry Hairston and Adam Kennedy will also deepen the bench.

The Dodgers didn't add a dynamic offensive player this offseason, but they extended their franchise center fielder and added complementary pieces. Health-permitting, there's no reason Los Angeles shouldn't remain in the hunt for postseason spots this year, though they're by no means favored to win anything. At the very least, the ownership of the franchise will change hands in the near future, ending the Frank McCourt era and ushering in an L.A. icon who aims to turn the Dodgers back into the National League's marquee franchise.