The Yankees announced on Monday that they have sent right-hander Shawn Kelley to the Padres in exchange for minor league righty Johnny Barbato. 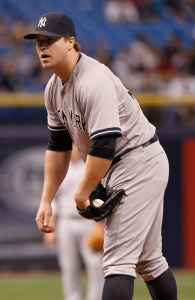 The 30-year-old Kelley posted a 4.53 ERA in 51 2/3 innings for the Yankees last season, though metrics such as FIP (3.02), xFIP (3.10) and SIERA (2.60) all feel that his whopping 11.6 K/9 rate will result in a lower ERA in the future. Kelley averaged 3.5 walks per nine innings last season — a mark that is more or less commensurate with his career mark of 3.2 — and notched a fairly typical 33.6 percent ground-ball rate. His fly-ball nature is undoubtedly a better fit for San Diego’s Petco Park than Yankee Stadium, though homers weren’t a significant detriment to Kelley in 2014. Rather, an unusually low 67.8 percent strand rate was Kelley’s biggest downfall this past season.

Kelley will be eligible for arbitration for the third time this offseason after earning $1.76MM in 2014. MLBTR contributor Matt Swartz projected a $2.5MM salary for the Frye McCann Sports client in 2015 in his last season before hitting the open market. He’ll join a 2015 Padres bullpen that features Joaquin Benoit in the closer’s role, supported by sophomore Kevin Quackenbush, veteran Dale Thayer, southpaw Alex Torres and righty Nick Vincent — a quintet that combined to pitch exceptionally well in 2014.

Barbato, the first piece of the deal to be reported, was enjoying an excellent season at Double-A as a 21-year-old before an elbow injury that may require Tommy John surgery (per the YES Network’s Jack Curry) shut him down in June. The Legacy Agency client posted a 2.87 ERA with 9.5 K/9 and 2.8 BB/9 in 31 1/3 innings as his club’s closer. Baseball America ranked him 30th among San Diego prospects in each of the past two offseasons, noting that while he has the potential for three plus pitches, his delivery and questionable command might make him better suited for the bullpen, where he could eventually become a big league setup man.

Robert Murray first caught wind of the swap, hearing that Barbato was headed to New York and then that Kelley was headed to the Friars (Twitter links).