After a season in which their pitching staff (and position players) were ravaged by injuries, the Rangers have added an arm to solidify their staff, announcing the acquisition Ross Detwiler from the Nationals. In exchange, Washington will receive righty Abel De Los Santos and infielder Chris Bostick. 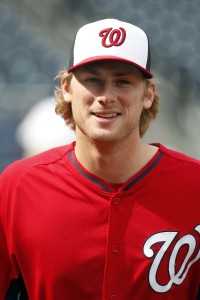 Previously, Detwiler had established himself as a fairly solid starter: he carried a 3.46 ERA over 301 2/3 frames from 2011-13, most of it working from the rotation. But the Nats shifted him to the pen given the team’s stacked rotation and the possibility that his stuff would play up in that role. Realistically, he did not have much of a place on this year’s Nationals roster with several lefties and starting depth pieces in place.

The southpaw comes with just one year of control — at a projected $3.3MM price tag — but will provide Texas with a rotation option or possible swingman piece. MLB.com’s T.R. Sullivan writes that the Rangers will give Detwiler the opportunity to start, though he could ultimately end up in a setup role if that does not pan out. While it is perhaps optimistic to say he has significant upside at this stage of his career, Detwiler could still deliver plenty of value for the Rangers. In particular, his solid 46.5 percent career ground-ball rate should be an asset with Elvis Andrus and Adrian Beltre in the infield.

The 21-year-old De Los Santos split the 2014 season between Class-A and Class-A Advanced, posting an outstanding 1.92 ERA with 10.4 K/9 and 2.9 BB/9 in 56 1/3 innings of relief. In his review of the Rangers’ prospects, Fangraphs’ Kiley McDaniel mentioned De Los Santos as a potential power arm in the bullpen.

Bostick, also 21, was acquired by the Rangers in last year’s Craig Gentry trade. He spent the season with Class-A Advanced Myrtle Beach and batted a respectable .251/.332/.412 with 11 homers and 24 steals (though he was caught 11 times as well). Bostick ranked 18th among A’s prospects at the time he was dealt to the Rangers, but his numbers in the Florida State League represented a decline from his work in the Midwest League a year prior.

This swap largely kicks off the offseason for both clubs. They have previously been linked in several trade scenarios, but nothing has been consummated. In fact, per MLBTR’s Transaction Tracker, the last time Texas and Washington matched up on a deal, the Nats acquired Tanner Roark — the man who in large part kept Detwiler from a rotation spot last year.

Jeff Passan of Yahoo Sports first reported that the Rangers would acquire Detwiler (on Twitter). USA Today’s Scott Boeck reported that Bostick and De Los Santos were headed to the Nats (Twitter link).