Here’s a look back at some of the top stories from an eventful week here at MLBTR. 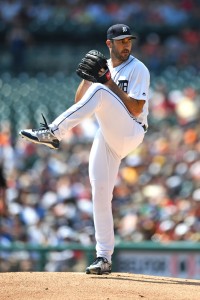 Astros acquire Justin Verlander. The Astros made one of the biggest moves at the August 31 deadline, acquiring Justin Verlander, $16MM, and a player to be named later or cash considerations in return for prospects Franklin Perez, Daz Cameron and Jake Rogers. The run-up to the deal was dramatic, as Verlander initially said no to being dealt to Houston, hoping instead to be traded to the Cubs. The Astros also added outfielder Cameron Maybin in a waiver claim from the Angels.

Angels acquire Justin Upton, Brandon Phillips. The Tigers completed another leg of their rebuilding plan in a surprising move this week, sending Justin Upton to the Angels for prospect Grayson Long and a player to be named later or cash. The Angels, hoping to aid their run at contention, took on all of the $88.5MM left on Upton’s contract beyond this year, assuming he doesn’t exercise his opt-out clause. They also added another veteran big-leaguer, Brandon Phillips, sending catcher Tony Sanchez to the Braves in return.

Mariners acquire Mike Leake. Upton’s wasn’t the only big contract to change hands this week, as the Cardinals shipped righty Mike Leake, international bonus spending rights, and around $17MM to Seattle for infielder Rayner Ascanio. Leake, who is under contract through 2020, has joined the Mariners’ rotation. In a separate deal, the Mariners also sent outfielder Leonys Martin and cash to the Cubs for a player to be named later or cash. In other significant Cardinals news this week, the team designated longtime reliever Kevin Siegrist for assignment. The Cardinals also promoted top prospect Jack Flaherty to take Leake’s place in the rotation.

Rangers acquire Miguel Gonzalez. The Rangers sent Yu Darvish to the Dodgers earlier this summer, but this week they made a move that suggests they haven’t quite pulled the plug on their 2017 season, acquiring righty starter Miguel Gonzalez from the White Sox for infielder Ti’Quan Forbes. The Rangers also welcomed back reliever Jake Diekman this week after Diekman struggled for months with inflammatory bowel disease. The team will have to pursue a playoff berth without Adrian Beltre, however, as it emerged this week that he would miss four weeks with a hamstring strain.

Phillies claim Juan Nicasio after Pirates place him on outright waivers. The Pirates made the surprising decision earlier this week to place reliever Juan Nicasio on irrevocable outright waivers, and the Phillies snapped him up even though they’re not in contention and Nicasio is eligible to depart via free agency in the offseason. (The Phillies also added a second veteran reliever this week, claiming Siegrist from the Cardinals.) Pirates GM Neal Huntington explained that he hoped placing Nicasio on waivers would enable him to be claimed by a contender in the American League.