8:40am: McCalvy provides additional financial details (Twitter link): Anderson will receive a $1MM signing bonus and is guaranteed salaries of $4.25MM in 2018 and $6MM in 2019. The contract also has $400K worth of incentives available each year.

8:26am: Anderson will be guaranteed $11.75MM over the two guaranteed years of the deal, reports FanRag’s Jon Heyman (on Twitter). MLB.com’s Adam McCalvy, meanwhile, tweets that Anderson can earn up to $31.35MM over the four years if both options are exercised and if Anderson meets all of the incentives that are baked into the deal.

8:05am: The Brewers announced this morning that they’ve signed right-hander Chase Anderson to a two-year contract that runs through the 2019 season and contains club options for the 2020 and 2021 seasons. Anderson, a client of Hub Sports Management, was arbitration-eligible for the second time as a Super Two player this winter. The new contract gives Milwaukee cost certainty over his final three arbitration years and as well as control over one would-be free-agent season. 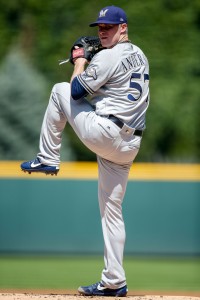 “Signing Chase to a multi-year contract furthers our strategy to acquire, develop and retain talent throughout our organization,” said Brewers GM David Stearns in a press release announcing the new contract. “Chase’s 2017 performance elevated his stature in the game and demonstrated that he has the capability to lead a rotation. Since he arrived in Milwaukee, Chase has been a model contributor to our community both on and off the field. We are happy for him and his family and look forward to Chase’s contributions for years to come.”

Anderson, 30 next month, was originally acquired alongside prospect Isan Diaz in the trade that sent Jean Segura from Milwaukee to Arizona. The righty has been a stable source of useful innings since debuting with the D-backs in 2014 but elevated his game to a new level in his second season with Milwaukee. This past season, Anderson broke out with a 2.74 ERA, 8.5 K/9, 2.6 BB/9 and a 39.2 percent ground-ball rate in 141 1/3 innings.

Anderson’s velocity jumped a bit in 2017, and in addition to his career-high K/9 rate, he also posted career-best marks in swinging-strike rate and opponents’ contact rate. Beyond his velocity increase, Anderson also began throwing more cutters and curveballs at the expense of his changeup and four-seam fastball — and the results were clearly favorable. An oblique injury cost him nearly two months of his season this summer, but outside of a minor triceps issue in 2015, Anderson has never been on the MLB disabled list with an arm injury.

Moving forward, Anderson figures to play an even larger part in the Milwaukee rotation, as the Brewers are not yet certain what to expect out of emergent ace Jimmy Nelson in 2018. Nelson underwent shoulder surgery last month, and it’s known that he’ll miss a notable portion of the upcoming regular season, though the team has yet to put a specific timeline on his recovery or project a return date. Anderson will be joined in the rotation by young righty Zach Davies, though as noted in MLBTR’s Offseason Outlook on the Brewers, the Brewers possess several options but few locks beyond those two spots. In all likelihood, that pair will be joined by at least one starting pitcher that isn’t currently in the organization.