The Mariners announced today that they have agreed to a new, multi-year contract extension with general manager Jerry Dipoto. The former MLB reliever had been in the final season of the deal that he originally inked to run the baseball operations for the Seattle organization. 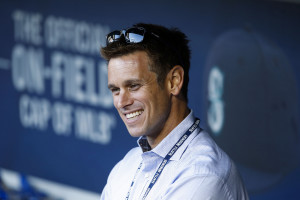 Terms of the new pact were not publicly released by the team. It’s not clear, then, just how long into the future Dipoto will remain under contract. But the announcement did make clear that it’s for multiple years, so presumably he has at least signed on through the 2020 campaign.

Dipoto, previously the GM of the Angels and interim GM of the Diamondbacks, took the helm in Seattle before the 2016 season. Jack Zduriencik held the post prior to Dipoto’s arrival. As the club notes in its announcement, the Mariners have MLB’s eighth-best record (220-192) since Dipoto came on board.

While the M’s have yet to reach the postseason — a dry spell that dates back to 2001 — they finally seem primed to do so this year. Indeed, the club is surprisingly keeping pace with the defending World Series champion Astros in the AL West, though it’d remain quite a surprise if Houston doesn’t find some separation by season’s end. Though the Mariners still have some work to do to capture a Wild Card, they entered play today with a 7.5-game lead over the Athletics.

Dipoto says the ultimate goal remains a World Series. Though that has yet to be achieved, the club obviously determined that Dipoto remains the best option to deliver the hoped-for result.

“Jerry arrived here two-and-a-half years ago with a specific plan for our franchise. He has successfully executed that plan, resulting in a younger, more athletic and, most importantly, far more successful Major League team.

At the same time, he has upgraded nearly every aspect of our overall baseball operation, improving systems, staff and communication in our Major League operations, our Player Development system, our Pro and Amateur scouting departments and our revamped High Performance Area.”

The youth and athleticism to which Mather refers are certainly themes that Dipoto has emphasized. In that pursuit, Dipoto has earned a reputation as the game’s most active GM on the trade market. We’ve tried to keep up with his prolific swapping in our Transaction Tracker, which reflects a bevy of deals (some significant, some not) since he joined the organization.

While critics have argued that those deals, in the aggregate, have not greatly increased the talent base in Seattle, the M’s feel they’ve boosted their overall quality while increasing flexibility and control. Certainly, Dipoto has not shied away from unique swaps in search of value. Among his most interesting swaps are the acquisition of Jean Segura and Mitch Haniger; the two–step swap that netted the club Drew Smyly; the takeover of the contract of Mike Leake; the position-changing addition of Dee Gordon; and, most recently, the early-season strike for Denard Span and Alex Colome.