DECEMBER 19: The Angels and right-hander Julio Teheran have agreed to a one-year contract, ESPN.com’s Jeff Passan reports (Twitter link).  Teheran will earn $9MM in the deal, The Athletic’s Ken Rosenthal (via Twitter) reports.  Teheran is represented by the Wasserman agency.

After spending his first nine seasons in Atlanta, Teheran will now head west to join what the Angels hope will be a greatly improved pitching staff.  Los Angeles has been linked to numerous top free agent starters, though their pitching acquisitions have thus far been more modest, between signing Teheran and trading four minor league pitchers to the Orioles for Dylan Bundy.  While putting Teheran and Bundy behind Shohei Ohtani still represents an upgrade for the Halos, one suspects the Angels will still look to add a topline arm rather than count on Ohtani to be an ace in his first season back from Tommy John surgery. 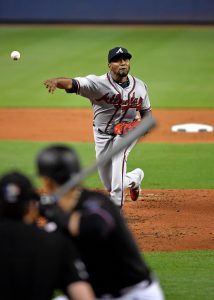 Given the amount of pitching injuries the Angels have faced in recent years, Teheran’s durability is a big plus.  The righty has averaged 191 innings per season from 2013-19, with only two minimal injured list stints (for a thumb contusion and a lat strain) in that span.  While Teheran has two All-Star appearances to his name and looked for a time like he could become the ace of the Braves’ staff, his last three seasons have been more modest.

Given these less-than-impressive advanced metrics, it wasn’t entirely surprising that the Braves chose to buy out the final year of Teheran’s contract for $1MM rather than pay him a $12MM salary for 2020.  (Teheran was playing on a six-year, $32.4MM extension signed prior to the 2014 season.)  The one-year guarantee from L.A. was also less than the two-year, $18MM MLBTR projected for him at the outset of the offseason.  The Teheran signing looks somewhat akin to the short-term signings of Matt Harvey and Trevor Cahill that Angels GM Billy Eppler orchestrated last winter, though obviously Eppler will be hoping for much more than the near-minimal return Harvey and Cahill brought to the 2019 Angels.

With Teheran now in the fold, the Angels have a projected luxury tax payroll of just over $185.5MM, as per Roster Resource’s Jason Martinez.  There’s still plenty of daylight between the Angels (who have never paid a tax penalty) and the $208MM luxury tax threshold, so Los Angeles has room to still make more additions to the pitching staff or the roster as a whole.