The Padres announced Thursday that they’ve traded minor league outfielder Buddy Reed to the Athletics as the player to be named later in this month’s Jurickson Profar deal. Oakland traded Profar to San Diego in exchange for catcher Austin Allen and a PTBNL back on Dec. 2. 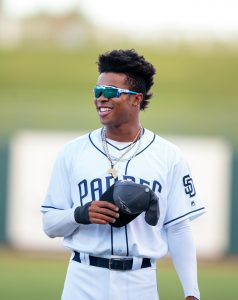 Now 24 years old, Reed starred at Florida in college and was selected by the Padres with the 48th overall pick in the 2016 draft. Scouting reports at FanGraphs and MLB.com tout him as a plus-plus runner with the potential to be a plus defender in center field, but he’s struggled with the bat at every level in the minors to this point outside of a strong half season in Class-A Advanced last year (which preceded additional struggles in Double-A).

In 2019, Reed hit .228/.310/.388 with 14 home runs, 15 doubles, two triples and 23 stolen bases with the Padres’ Double-A affiliate in Amarillo. Reed did post a career-best 9.5 percent walk rate in the Texas League this year, but he also whiffed at a 28.6 percent clip. Even if he’s unable to make substantial gains at the plate, Reed could still draw enough walks, run well enough and play strong enough defense to eventually be a fourth outfielder in Oakland. That said, he was eligible to be selected in today’s Rule 5 Draft and went unclaimed, so it’s fairly clear that other clubs are wary of his flimsy offensive profile at the moment.

Athletics fans looking to learn more about their new outfield prospect can check out MLBTR’s Q&A with Reed shortly before he was drafted back in 2016.