The Orioles have inked fifth-round right-hander Carter Baumler to an above-slot bonus, Jim Callis of MLB.com tweets. Baumler – the 133rd pick – will receive $1.5MM, a vast increase over the $422,300 recommended value of his selection. Notably, with Baumler under wraps, every pick from this year’s five-round MLB amateur draft class has signed.

The 18-year-old Baumler, who played high school baseball in Iowa, committed to Texas Christian University before the draft. He’ll bail on his TCU commitment in favor of the Orioles, who are getting a player who ranked among the top 150 available pre-draft players at ESPN (No. 100), MLB.com (02), FanGraphs (127) and Baseball America (147). According to MLB.com, Baumler boasts a 90 to 94 mph fastball with encouraging secondary offerings in a curveball and a changeup, as well as a “clean delivery and arm action.”

6:23am: The Marlins had lagged the rest of the league in draft signings but now appear to be making progress. Second-rounder Dax Fulton and third-rounder Zach McCambley are putting the finishing touches on agreements, Craig Mish of Sports Grid reports (Twitter links).

Fulton’s deal comes in at a hefty $2.4MM, over half a million over-slot, so the Fish will be applying savings from other selections to make the bonus pool allocation math work. The high-school southpaw had been destined for the University of Oklahoma.

There’s a chance the Miami organization has come away with a steal in Fulton, whose risk profile changed after recently undergoing Tommy John surgery. Even given the added uncertainty, he placed 29th on the ESPN.com board and drew lofty grades from other pundits.

Getting Fulton to his ceiling will require some careful developmental work. Keith Law of The Athletic, who ranked Fulton lowest of the major outlets (#67), says the left needs to clean up his mechanics. Per Law: “There’s definite upside here, assuming his stuff returns, but also real risk if his arm action stays the same.”

As for McCambley, a Coastal Carolina product, the bonus value isn’t yet known. He was taken 75th overall, a pick that came with a $831,100 allocation. That’s precisely the range where most prognosticators expected him to be taken.

Like Fulton, McCambley is a potentially explosive lefty. In this case, the questions surround his ability to develop a third offering. Baseball America explains that McCambley features a plus heater and curve, but needs to re-work his change if he’s to progress towards a big-league rotation.

The Indians have a deal in place with supplemental first-round selection Tanner Burns, according to MLB.com’s Jim Callis (Twitter link). It’s a $1.6MM bonus that falls shy of the $2,045,400 slot allocation that came with the 36th pick.

Burns drew first-round grades from several pundits, with Baseball America, The Athletic, and MLB.com all ranking him among the thirty best players available. ESPN.com and Fangraphs were somewhat less bullish but still saw him as at least a second-round player.

Though he isn’t viewed as possessing overwhelming upside, Burns is seen as having a starter’s arsenal with excellent fastball command. It seems that long-term durability represents the biggest question, though it’s based more on his lack of height (he’s 6’0) than on a particularly concerning history of injuries (though there have been some shoulder woes).

The Giants have locked up third-round draft choice Kyle Harrison, per MLB.com’s Jim Callis (via Twitter). It was known already that a deal was close, but it’s now in the books.

Harrison is said to be lined up for a $2.5MM bonus, well over the $710,700 slot allocation that came with the 85th overall choice. It was long believed the UCLA commit would require a sizable bonus to forgo college.

Draft observers weren’t universally sold on Harrison’s future. He didn’t rank higher than #54 on any draft boards, earning that placement from Keith Law of The Athletic.

That said, Harrison’s fastball velocity and draft profile were on the rise and might well have gained further ground had the season not been suspended. Fangraphs cited his “weird angle of attack,” “deception and great feel to pitch.” MLB.com, which ranked Harrison 63rd overall, credits the young southpaw with “a feel to use all three offerings.”

The 21-year-old Nicolas attended college at Ball State, where he struggled to keep runs off the board in his first two seasons before coming into his own during a shortened 2020 campaign. Across 23 innings last season, he logged a 2.74 ERA with 14.5 K/9 against 2.7 BB/9. He subsequently entered the draft as a top 70 prospect according to FanGraphs (53), MLB.com (60), ESPN’s Kiley McDaniel (64) and Baseball America (No. 68). FanGraphs, the most bullish of those outlets, calls Nicolas a relief-only prospect and writes that he brings a high-90s fastball and a promising slider/curveball mix to the table.

Nicolas joins first-rounder Max Meyer as the only 2020 draft picks the Marlins have signed so far. Second-rounder Dax Fulton, third-rounder Zach McCambley, fourth-rounder Jake Eder and fifth-rounder Kyle Hurt are still without the deals. The Marlins went into the draft with a $12,016,900 bonus pool. Between Nicolas and Meyer, they’ve spent just over $7.8MM.

The latest amateur draft signings from around the league…

8:12PM: Miller will receive a $1.29MM bonus, as per Jim Callis of MLB Pipeline (Twitter link).  This puts the Reds just under their bonus pool limit with $6,100 to spare.

6:02PM: The Reds have completed their draft signings by reaching an agreement with 65th overall pick Jackson Miller.  The 18-year-old catcher announced the news himself on his Twitter feed.

Terms of the deal aren’t yet known, though the 65th overall pick comes with a slot value of $1,025,100.  Since the Reds have already signed five of the other six members of their draft class, they have plenty of room remaining ($1,296,100) in their $8,552,100 draft pool to give Miller an above-slot bonus.  Cincinnati could even offer more than that $1,296,100 figure if the team doesn’t mind paying a 75 percent tax on the overage for exceeding the draft pool limit, though topping the pool by more than five percent would be penalized with the loss of a future first-round pick.

The Athletic’s Keith Law described Miller as having “an advanced feel to hit,” albeit without yet much power in his left-handed swing.  Law ranked Miller 62nd on his list of 2020 draft prospects, with other pundits like Baseball America (99th), MLB Pipline (104th), and Fangraphs (123rd) not being quite as high on the 18-year-old.  As a catcher, the scouting reports noted some room for improvement, but plenty of promise for Miller to become at least an average defensive backstop.  Miller had committed to Wake Forest, but he’ll now begin his pro career as the Reds’ potential catcher of the future. 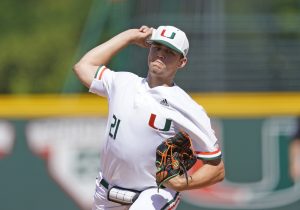 July 8: Martin has signed his deal and will be paid a $7,000,825 bonus, tweets MLB.com’s Jim Callis. That’s roughly $800K over slot and makes Martin the second-highest-paid player in this year’s draft — trailing only top overall pick Spencer Torkelson. An official announcement from the Jays should come in the near future.

July 3: The Blue Jays have reached a deal with first-round pick Austin Martin, reports Sportsnet’s Hazel Mae (Twitter link). The former Vanderbilt shortstop/third baseman will need to pass a physical before his deal with the club becomes official. Bonus details aren’t yet known, but Martin’s No. 5 overall draft slot is valued at $6.18MM. 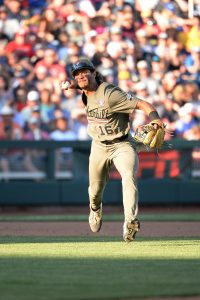