2:26pm: Both teams have announced the trade. Texas will also land $133K in international slot compensation in the deal, and it will pay half of Minor’s remaining salary, Jeff Wilson of the Fort Worth Star-Telegram tweets.

1:05pm: Texas will receive outfielder Marcus Smith and third baseman Dustin Harris, Levi Weaver of The Athletic reports. Both players were 2019 draft picks for the Athletics, who took Smith in the third round and Harris in the 11th. MLB.com ranked Smith as the A’s 22nd-best prospect before the trade.

11:32am: The Athletics have acquired left-hander Mike Minor from the division-rival Rangers for two players to be named later, Jeff Passan of ESPN reports. The two players are prospects, according to Ken Rosenthal of The Athletic. 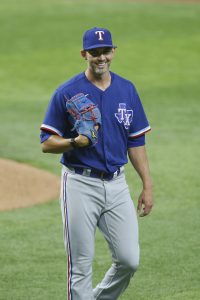 The 32-year-old Minor is only a season removed from serving as one of the American League’s most effective starters (he finished eighth in Cy Young voting), but 2020 hasn’t worked out according to plan. Minor has made seven starts this year and managed a dismal 5.60 ERA/4.83 FIP with 8.92 K/9 and 3.31 BB/9 through 35 1/3 innings, all while experiencing a 2 mph drop in average fastball velocity compared to last season. His disappointing production is among the reasons the Rangers are just 12-21 and among the few teams in baseball that look to be completely out of the playoff race.

Now, considering the Rangers’ status as non-contenders, Minor’s prorated $9.83MM salary and his pending free agency, the team’s moving on from him. He wouldn’t have been in line for a qualifying offer because of this year’s poor output, so Texas took what it deemed as the best offer for Minor. We may not know the identities of the players the Rangers are getting for Minor for a while, as only those in teams’ 60-man pools are eligible to be dealt right now.

Meanwhile, the Athletics – owners of the AL’s second-best record (22-12) – are no doubt hoping Minor will return to his previous form in their uniform. He encouraged in his final Rangers start Friday with six shutout innings against the high-powered Dodgers, and will now join an A’s staff that has produced middle-of-the-road results thus far. Jesus Luzardo and Chris Bassitt have logged sub-4.00 ERAs this year; Sean Manaea has registered far better peripherals than run prevention numbers; and Frankie Montas, Mike Fiers and Daniel Mengden have struggled across a combined 15 starts.