JAN 25: The Astros have announced the deal, per Chandler Rome of the Houston Chronicle (via Twitter). 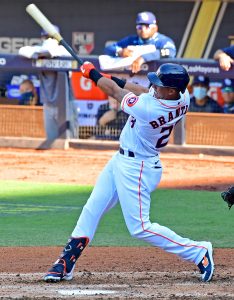 That Brantley is returning to Houston is stunning, as just hours ago it appeared he would join friend and former Astros outfielder George Springer in Toronto. However, in the wake of reports suggesting Brantley would head north, a Toronto official shot down the notion that the club had a deal with him. The Blue Jays did indeed have interest in the 33-year-old Brantley, but they couldn’t close the deal for reasons that aren’t yet known. As a result, it appears Brantley will spend a third consecutive season with the Astros.

This is the second straight two-year, $32MM contract Brantley, formerly with Cleveland, has inked with Houston. The previous deal worked out for both sides, as Brantley earned his fourth All-Star nod in 2019 and has combined for a stellar .309/.370/.497 line with 27 home runs over 824 plate appearances during his run with the Astros. Thanks to his continued success, MLBTR ranked Brantley as the game’s 13th-best free agent at the beginning of the offseason and predicted he would land a two-year, $28MM pact.

With Brantley staying in Houston, the team has addressed a key need in its outfield, where it opened the offseason with major questions. The Astros were at risk of losing all of Brantley, Springer and Josh Reddick on the open market (Reddick is still a free agent). Now, though, they have two corner spots spoken for with Brantley and Kyle Tucker. It’s not yet clear who will replace Springer in center, and it’s certainly worth noting that Brantley may not be an optimal solution as an everyday outfielder anymore. Brantley has dealt with serious injuries in the past, and he missed time last year with a quad issue. When healthy, Brantley appeared in left field in just 19 of 46 games, spending the rest of his season at designated hitter. That spot won’t be available to Brantley on a regular basis in 2021 if offensive standout Yordan Alvarez returns to health after undergoing surgeries on both knees last August.

Losing out on Brantley may be a significant disappointment for the Blue Jays, but they’re not devoid of talent in the outfield and at DH. Springer, Teoscar Hernandez, Lourdes Gurriel Jr. and Randal Grichuk give the team a strong outfield quartet on paper, though adding Brantley obviously would have made the Jays even more formidable after they earned a playoff berth in 2020.