The Rays are adding some big-name bullpen depth for the final six weeks of the season, announcing on Monday that they’ve signed right-hander David Robertson to a Major League contract. Robertson, who just pitched for Team USA during the Summer Olympics, will head to Triple-A for a tune-up for the time being. Left-hander Jeffrey Springs, who’d been out with a knee sprain, has been transferred to the 60-day injured list. 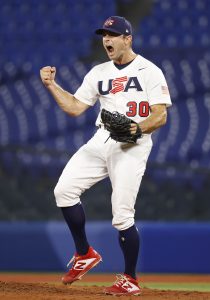 Robertson, 36, will be aiming to return to a big league mound for the first time since early in the 2019 season. He reached free agency for the second time of his career on the heels of a strong season with the Yankees in 2018 and wound up inking a two-year, $23MM deal to serve as the Phillies’ closer. He was entering his age-34 season at the time and had been the game’s most durable reliever in the nine prior seasons — averaging 65 appearances and 65 innings per year without ever incurring a major arm injury.

As has so often been the case with relievers acquired by the Phillies in recent years, however, things simply didn’t go according to plan. The ultra-durable Robertson hit the injured list early in the 2019 campaign, and by season’s end it was clear that he’d require Tommy John surgery. He missed the entire 2020 campaign as well and ultimately only pitched 6 2/3 frames as a member of the Phils.

Robertson received some interest from clubs during Spring Training but opted not to sign prior to the season. Instead, he wound up as one of a handful of highly recognizable veterans who pitched for the United States during the Olympic Games this summer, eventually earning a Silver Medal. Robertson tossed three innings during tournament play and yielded a pair of runs — not ideal results, but the event also served to demonstrate his health for contenders in need of bullpen depth.

From 2010-18, Robertson was one of the game’s most consistent and most successful relievers. He racked up 583 innings between the Yankees and White Sox in that time, pitching to a 2.72 ERA with a brilliant 32.6 percent strikeout rate and a 9.3 percent walk rate. He served as a setup man for Mariano Rivera for much of that time but eventually stepped up as the Yankees’ closer in their first post-Rivera season before inking a four-year, $46MM deal to serve as the White Sox’ closer.

Time will tell what type of form Robertson is in at this juncture of his career, but for the Rays there’s no reason not to take a look and see if Robertson can recapture some of his old form. If he’s able to do so, he’d not only be a major boost to the team down the stretch but also in pivotal postseason games. Tampa Bay currently leads the American League East by three games.

As for Springs, it’s an unfortunate outcome for the 28-year-old southpaw, who’d had a career year in Tampa Bay. Acquired in a deal that sent former top catching prospect Ronaldo Hernandez to Boston, Springs worked to a 3.43 ERA in 44 2/3 frames with the Rays before going down with a knee sprain. While he said at the time of the injury that he hoped to be back in a matter of two to four weeks, it seems the damage was either worse than initially expected or perhaps worsened during Springs’ rehab efforts. He underwent surgery to repair an ACL tear today, which will end his season and call for a rehab process that could potentially linger into 2022.