Rays left-hander Colin Poche suffered an oblique strain tonight and is done for the year, according to Marc Topkin of the Tampa Bay Times.

With Poche out, the Rays will lose another southpaw from their bullpen mix just as they are about to begin a Wild Card series against the Guardians, who have a significant number of guys who hit from the left side of the plate. Steven Kwan, Josh Naylor and Andrés Giménez are all lefties while José Ramírez is a switch-hitter.

Jalen Beeks, another lefty, also recently landed on the injured list. Without Poche and Beeks, Tampa will be left with Brooks Raley and Garrett Cleavinger as the primary southpaws in their relief corps. However, since Poche is done for the year, the club could put him on the 60-day injured list and select another reliever to the roster. Poche has crossed three years of MLB service time this year and will therefore be eligible for arbitration in the offseason.

JULY 21: Rays lefty Colin Poche has been diagnosed with a torn ulnar collateral ligament in his left elbow and will miss the 2020 season, the team announced. Tommy John surgery has been recommended for the 26-year-old Poche, who has been placed on the 45-day injured list. Tampa Bay selected veteran catcher Kevan Smith to the big league roster in a corresponding move.

The loss of Poche is a tough blow for the Tampa Bay bullpen. While last season’s 4.70 ERA doesn’t exactly stand out as an impressive mark. Poche’s secondary numbers were all considerably better. The southpaw averaged 12.5 strikeouts and 3.3 walks per nine innings pitched with a 4.08 FIP in 51 2/3 frames.

In spite of that unsightly ERA, Poche overwhelmed both left- and right-handed hitters, yielding just a .167/.276/.348 slash to lefties and a .190/.277/.388 line to righties. A 67.6 percent strand rate that was vastly worse than his career mark in the minors, and Statcast pegged Poche in the 91st percentile or better in terms of swinging-strike rate and his opponents’ expected batting average, slugging percentage and weight on-base average. A breakout season for the talented lefty seemed eminently possible, but he could now be sidelined into late 2021 — if not all the way into the 2022 season.

Poche will get a year of service time in 2020 as he rehabs on the 45-day IL, and he’ll need to be placed on the 60-day IL to open the 2021 season as well. If he is indeed out until 2022, he may be arbitration-eligible as a Super Two player by the time he’s able to return to the mound, although with 114 days under his belt at the moment, he’d be a very borderline case for Super Two status.

As for the 32-year-old Smith, he’ll likely make the club’s roster as a backup catcher. Smith has seen time in each of the past four seasons — 2016-18 with the White Sox and 2019 with the Angels — hitting a combined .272/.318/.381 along the way. That’s pretty solid production from behind the plate, but Smith also owns a woeful 14 percent caught stealing rate and has posted sub-par framing numbers as well. 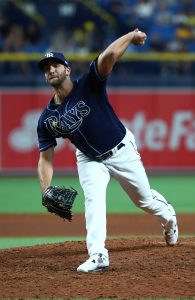 The Red Sox have been surprisingly silent on the bullpen market this winter despite the fact that Joe Kelly has left for the Dodgers and Craig Kimbrel remains unsigned — seemingly likely to land with another organization as well, based on comments from Boston president of baseball ops Dave Dombrowski. ESPN.com’s Buster Olney writes (subscription required), however, that the Sox are confident in a number of internal options. Recent draftees Travis Lakins (sixth round, 2015) and Durbin Feltman (third round, 2018) could both emerge at the MLB level in 2019, while many in the Red Sox’ analytics department are intrigued by trade pickup Colten Brewer (whom the Sox tried to acquire last summer as well, Olney notes). Tyler Thornburg represents a notable bounceback option, as well. It’s nonetheless jarring to see the Sox take a passive approach to rounding out the ’pen on the heels of a World Series championship. Perhaps there’s yet another move in store with several relievers still available (MLBTR Free Agent Tracker link), but it seems likely that the Boston ’pen will have to prove its share of naysayers wrong in 2019.

3:49pm: The Rays and Diamondbacks have now announced the trade.

2:51pm: The Rays have acquired righty Sam McWilliams and southpaw Colin Poche from the Diamondbacks, according to Nick Piecoro of the Arizona Republic. That pair of hurlers will make up the final portion of the late-February swap that brought outfielder Steven Souza to Arizona.

The Tampa Bay organization had insisted it only relented to moving Souza because of the quality of the return. Today’s news does help to bolster that claim, as the two newcomers are not just throw-in assets.

McWilliams, 22, is a big right-hander who was tabbed as the 13th-best prospect in the Arizona system coming into the season by Baseball America. He has opened eyes since, turning in 25 2/3 innings of 2.10 ERA ball in his first turn at the High-A level. Importantly, he has drastically increased his strikeout rate (to 11.2 K/9, nearly double his career rate) while maintaining his typically reliable control (2.1 BB/9). Arizona had initially picked him up in the trade that sent right-hander (and former Ray) Jeremy Hellickson the Phillies, though McWilliams has raised his profile a bit since that time.

The 24-year-old Poche is closer to the Majors, though unlike McWilliams he does not carry the potential upside of working as a starter. He has enjoyed some success in the past, but nothing like what he has shown thus far this season at Double-A. In 11 shutout innings, Poche has allowed just three hits while compiling a whopping 23:2 K/BB ratio.

It seems reasonable to think that he could be on the MLB radar in the relatively near term — he was included on Jason Martinez’s first Knocking Down the Door feature of 2018 — if he can sustain anything approaching that level of production. Baseball America rated Poche 29th among Arizona farmhands this past offseason, though like McWilliams, his early work has likely elevated his status to an extent.