A pair of former major leaguers recently signed with teams in the American Association, according to the league’s transactions log. Outfielder Oswaldo Arcia has signed with the Cleburne Railroaders, while infielder Darnell Sweeney returned to the Kansas City Monarchs.

Arcia, the older brother of Braves utilityman Orlando Arcia, appeared in the big leagues between 2013-16. Included among Baseball America’s top 50 overall prospects heading into 2013, the now-30-year-old Arcia looked as though he could emerge as a middle-of-the-order power bat during his time in the Twins system. The left-handed hitter flashed some power potential over his first couple seasons, popping 34 home runs with a .201 ISO (slugging minus batting average) over 788 plate appearances between 2013-14.

Along with that power came big strikeout totals and below-average walk rates, however. That led to Arcia struggling from an on-base perspective, and his overall offensive output checked in around the league average. He’s limited to the corner outfield or designated hitter, and public metrics have pegged him as a below-average defender even in the corners. Without the high-end offensive output to compensate for that lack of value with the glove, Arcia bounced between four different clubs in 2016.

The Venezuela native spent the 2017 campaign in Triple-A with the Diamondbacks. He caught on with the Nippon-Ham Fighters in Japan the following year, hitting .222/.315/.405 over 324 plate appearances. Arcia spent the 2019 season in the Mexican League and will try to work his way back into the affiliated ranks with a strong showing in his first year with the Railroaders.

Sweeney, on the other hand, has suited up for the Monarchs in two of the past three seasons, with a one-year stop as a member of the Winnipeg Goldeyes (also a member of the American Association) in 2020. The switch-hitting utilityman came up in the Dodgers’ system and was traded to the Phillies in 2015 as part of the deal that sent Chase Utley to Los Angeles. He played in 37 games for the Phils down the stretch but didn’t return to the big leagues until 2018, when he made a pair of appearances with the Blue Jays. The 31-year-old is a .252/.320/.394 hitter in parts of five Triple-A seasons.

The Pirates have signed utilityman Darnell Sweeney to a minor league contract, John Dreker of Pirates Prospects reports.  Sweeney will report to the Bucs’ Triple-A affiliate.

Sweeney appeared in two games with the Blue Jays last season, which marked his first taste of Major League action since debuting as a big leaguer with a 37-game stint for the Phillies in 2015.  The 28-year-old has a .172/.294/.345 slash line to show for his 102 career plate appearances in the Show, though he has a significantly better .267/.339/.412 career mark over 3302 minor league PA for four different organizations.  After being let go into free agency by the Jays last winter, Sweeney signed on with the Kansas City T-Bones of the independent American Association.

Sweeney has played mostly as an outfielder at the big league level, though he has amassed quite a bit of second base, shortstop, and third base experience in the minors.  This extra versatility will be helpful in earning a spot on the Pirates’ roster, as Pittsburgh is already dealing with a glut of outfielders (barring a trade, of course).

The Blue Jays have signed right-hander Mike Hauschild to a Major League contract, as first noted by Shi Davidi and Mike Wilner of Sportsnet (Twitter links). The Jays didn’t make a formal announcement of the move via press release or on Twitter, but Hauschild is on tonight’s lineup card. Furthermore, Davidi tweets that manager John Gibbons said Hauschild is expected to follow Tyler Clippard in a bullpen game of sorts tonight. It appears that infielder/outfielder Darnell Sweeney was the necessary roster casualty, as he’s not on tonight’s lineup card, and the Jays had a full 40-man roster prior to bringing Hauschild aboard.

Hauschild, 28, was recently released by the Astros after posting a 4.88 ERA with 8.6 K/9, 3.5 BB/9, 0.65 HR/9 and a 53.6 percent ground-ball rate. He has a bit of big league experience, having been a Rule 5 pick of the Rangers in 2016 and subsequently logging eight innings at the MLB level for them in 2017. He was ultimately returned to the Houston organization after surrendering 10 runs in that small sample.

Though Hauschild’s numbers in Triple-A this season weren’t his best, he still brings a career 3.97 ERA with better than eight strikeouts per nine innings and a ground-ball rate north of 50 percent at the Triple-A level to his new club. He’ll join the Jays’ bullpen for the time being, though all 76 of his career appearances at the Triple-A level have been starts. He could eventually emerge as a rotation option in Toronto, particularly if the team moves a veteran like Marco Estrada in the month of August.

The Blue Jays announced today that utilityman Darnell Sweeney has been outrighted. He had been selected to the 40-man roster recently, appearing briefly in the majors before being optioned to Triple-A.

The 27-year-old saw action in one game but did not take a plate appearance. He’ll presumably head back to Buffalo, though he does have the right to take his free agency instead. In 178 plate appearances there to this point, he carries a .228/.309/.430 slash with six long balls.

Sweeney, 27, has only seen brief action in the majors, with a brief run with the Phillies back in 2015. He hasn’t shown enough offensive potential in the upper minors to force further opportunities, with a .255/.323/.397 cumulative slash in 400 career games a Triple-A.

That said, Sweeney does offer immense versatility, with significant professional experience in the infield (at second, third, and shortstop) and outfield (left and center). Though he has swiped quite a few bags in the minors, Sweeney has also been caught rather frequently. In total, he has 156 steals but has been tagged out 83 times.

The Dodgers have traded infielder/outfielder Darnell Sweeney to the Reds for future considerations, tweets J.P. Hoornstra of the Southern California News Group.

Los Angeles has now traded Sweeney twice, the first time coming when it sent him to Philadelphia in 2015 to acquire second baseman Chase Utley. Then, the Dodgers got Sweeney back last offseason as part of the return they received from the Phillies in trading veteran infielder/outfielder Howie Kendrick. Sweeney returned to LA in the deal with infielder Darin Ruf. Given that Ruf is now playing in the Korea Baseball Organization, the Dodgers have nothing to show for the Kendrick trade anymore.

Sweeney, a 26-year-old switch-hitter, has seen major league action in one season – 2015 – and hit .176/.286/.353 during that 98-plate appearance showing with the Phillies. The plurality of his work has come at Triple-A, where he owns a .250/.314/.383 slash in 1,100 PAs (including a .227/.290/.412 line in 131 Pacific Coast League plate trips this season). While Sweeney hasn’t gotten on base much in the minors, he is somewhat of a threat when he does, having swiped 141 bags at Triple-A (albeit with 67 caught stealings). Defensive versatility is a selling point for Sweeney, who has lined up at second, short, third and two outfield positions (left and center) in the minors.

The Phillies have acquired infielder/outfielder Howie Kendrick from the Dodgers, per a club announcement. First baseman Darin Ruf and second baseman/outfielder Darnell Sweeney will head to Los Angeles in return. 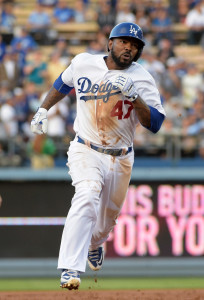 Still, adding the veteran would seem to make it somewhat more likely that the Phils would feel comfortable parting with Cesar Hernandez, the incumbent at second. Hernandez, 26, added on-base ability to his speed and defense in 2016 for a surprisingly excellent campaign. With three years of control remaining, he is a rather appealing potential trade piece — not least of which since he has also spent time at short and center. Jim Salisbury of CSNPhilly.com reports that Hernandez drew strong interest at the GM Meetings, and while Kendrick may not currently be slated to step right in to replace him, it remains plausible that the Phillies could look to cash him in at some point over the coming months.

Regardless of precisely how he fits, Kendrick will provide the Phillies with just the kind of veteran presence they entered the offseason in search of. And he’ll do so without requiring a multi-year commitment. If all goes well, he’ll bounce back after an uncharacteristically poor season at the plate. Kendrick ended with a .255/.326/.366 batting line, with eight home runs and ten steals, over 543 plate appearances. That was easily the worst full-season effort of his career.

If Kendrick can regain his form, he’ll help the team improve its level of play and may even turn into a trade or (perhaps less likely) qualifying offer candidate. There is some reason for hope. He maintained a strong 33.8% hard-hit rate even as his typically high BABIP dipped to .301 — easily a career-low. And Kendrick managed to boost his walk rate to a career-best 9.2% while maintaining his characteristically palatable strikeout numbers (his 17.7% K rate last year landed just north of his 17.2% career rate).

For the Dodgers, the swap was more about clearing payroll and roster space — particularly after Kendrick expressed disappointment with his usage. Now, the team’s needs in the corner outfield, and at second and third base, are all the more pronounced. Already a lefty-leaning club with the bats, Los Angeles seems primed to pursue right-handed hitting in more than one area this winter. But while the return wasn’t the driving force here, there’s reason to believe it could deliver some function, especially for the always-clever Los Angeles front office.

Ruf, 30, is perhaps likeliest to make an impact. He had a short and forgettable MLB stint last year, but raked at Triple-A and owns a .299/.379/.542 lifetime slash against left-handed pitching. True, the right-handed hitter has been sub-par without the platoon advantage, and contributes nothing on the bases or in the field (though he can play some first and, at least in limited doses, the corner outfield). He’s also out of options. But the Dodgers have a number of flexible assets and may like the idea of allowing Ruf to spell Adrian Gonzalez at first base and function as a right-handed bench bat — or, at least, giving him the chance to unseat Scott Van Slyke in such a role in camp.

Sweeney, too, has some potential uses. The 25-year-old switch-hitter, who originally came to Philadelphia from Los Angeles in the Chase Utley deal, is capable of playing all over. He didn’t hit much in a brief MLB debut in 2016, and struggled last year at Triple-A. But he has shown better at times in the past, even flashing double-digit home run power and real stolen base potential in several separate seasons, and it wouldn’t be all that surprising if he found his way onto the Dodgers’ roster at some point. Doing so would mean adding him back to the 40-man, as he had been outrighted by the Phils, but that too increases his appeal at this stage since he won’t occupy a roster spot upon his arrival.