Longtime closer Francisco Cordero has officially announced his retirement, reports Enrique Rojas of ESPN Deportes. Cordero, of course, hasn’t pitched in the Majors in three seasons — his last big league game came on Aug. 1, 2012 — but he had yet to fully give up on his goal of returning, as evidenced by the fact that he pitched in winter ball in 2013 and 2014 and also went to Spring Training with the Red Sox in 2014.

Cordero explained to Rojas that he didn’t want to walk away without making a formal announcement of his decision, and so even though he himself suggested that the timing is a bit unusual, he still felt it was the right thing to do. Cordero formally thanked each organization for which he pitched over the course of a 20-year professional career and the fans who supported him during that time.

Cordero’s consistently strong results from 2002-07 led him to sign one of the largest contracts ever received by a relief pitcher — a four-year, $46MM contract with Cincinnati that, to this day, is topped only by Jonathan Papelbon’s $50MM guarantee with the Phillies and B.J. Ryan’s $47MM guarantee with the Blue Jays. In total, Cordero earned more than $66MM over the life of his career, according to Baseball-Reference.com. MLBTR wishes him and his family happiness in his post-playing days.

TODAY, 9:37am: Correcting his earlier report, Cotillo tweets that Cordero is represented by Relativity.

YESTERDAY, 4:28pm: Cordero will be represented by new agents on the open market, tweets Chris Cotillo of MLBDailyDish.com. He has switched from Proformance to ACES.

11:20am: The Red Sox have released pitcher Francisco Cordero, tweets Tim Britton of the Providence Journal. The move was expected after GM Ben Cherington said this morning that Cordero would not make the roster and was not expected to accept a minor league assignment.

Cordero, soon to turn 39, has not seen MLB action since 2012. Once one of the most reliable relievers in the game, the longtime closer had a rough go in his last big league season, putting up a 7.55 ERA campaign in 2012. Before that, however, he had gone a decade of full-time work without an ERA greater than 3.84, and had posted six seasons of sub-3.00 ERA pitching. In eight spring innings for the Red Sox this year, Cordero struck out eight while surrendering just one walk, five hits, and no earned runs.

Diamondbacks reliever David Hernandez has a torn UCL and may require Tommy John surgery, Hernandez's agent Jason Hoffman tells FOX Sports' Ken Rosenthal (Twitter link).  Hernandez is getting a second opinion but if the original diagnosis is confirmed, the right-hander will miss the entire 2014 season.  Since coming to Arizona in December 2010 as part of the Mark Reynolds trade, Hernandez has posted a 3.42 ERA, 3.17 K/BB and 10.8 K/9, though he struggled a bit last season due to an inflated home run rate.  Losing Hernandez would further hurt the Arizona pitching staff, which also lost Patrick Corbin to an UCL tear earlier this month.

The latest on the 2013 World Series champs…

MONDAY: Jon Heyman of CBS Sports tweets that Cordero's base salary upon making the team would be $1MM.

SUNDAY: The Red Sox have signed Francisco Cordero to a minor league deal, according to John Tomase of the Boston Herald (on Twitter).  The former closer last appeared in the majors in 2012 with the Astros.

Free agent reliever Francisco Cordero is aiming for 2014 after undergoing surgery on his non-throwing shoulder, tweets Ken Rosenthal of FOX Sports.  Cordero was released by the Astros in September of last year.

The Astros have released Francisco Cordero, according to MLB.com's Brian McTaggart (on Twitter).

Houston acquired Cordero as part of a 10-player trade with the Blue Jays that also netted them Ben Francisco and five minor leaguers. Cordero was installed as Houston's new closer, but struggled mightily in five innings for the 'Stros. The 37-year-old allowed 11 runs on 13 hits before hitting the 15-day disabled list. He hasn't appeared in a game since Aug. 1.

Cordero signed a one-year deal worth $4.5MM late in January to serve as the setup man for new Blue Jays closer Sergio Santos. Neither Santos nor Cordero wound up latching onto the closer role in Toronto, however, as Casey Janssen emerged as the team's ninth inning stopper following Santos' injury problems and Cordero's ineffectiveness. Cordero endured far and away the worst season of his career in 2012, pitching to a 7.55 ERA in 39 1/3 innings thanks to a whopping nine homers allowed. 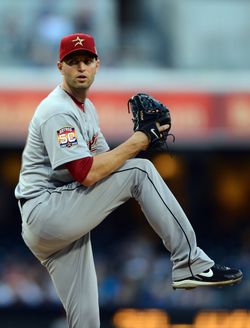 “Once again we are adding depth to our minor league system with quality young players," GM Jeff Luhnow said in a team press release. "We really feel this will help us moving forward and are extremely excited about the players we’ve added to our organization.”

This marks the second time in three years that Happ has been involved in a midseason trade. The Astros acquired the left-hander from Philadelphia along with current Blue Jays outfielder Anthony Gose for Roy Oswalt in 2010. Happ, 29, has a 4.83 ERA with 8.5 K/9 and 3.4 BB/9 in 104 1/3 innings so far in 2012. He's earning a salary of $2.35MM this year and will remain under team control through 2014.

Cardinals legend Red Schoendienst was born on this day in 1923.  Schoendienst spent 15 seasons in St. Louis as a player and 14 more as a manager, winning a World Series in both positions (as well as another Series win as a member of the Milwaukee Braves in 1957).  Schoendienst's career was capped off when he was inducted into the Hall of Fame in 1989.

Here's some news from both St. Louis and elsewhere in the NL Central…

Cordero, 36, posted a 2.45 ERA with 5.4 K/9, 2.8 BB/9 and a 50% ground ball rate in 69 2/3 innings for Cincinnati this past season. Cordero reached the 30-save plateau for the fifth consecutive season, saving 37 games. His average fastball velocity checked in at 93 mph, but peripheral stats such as xFIP (4.14) and SIERA (3.91) suggest his 2.45 ERA may be artificially low. The Angels, Phillies, Orioles and Rangers all showed interest in Cordero leading up to today's agreement, MLBTR has learned.

The Blue Jays' bullpen will look considerably different in 2012, with newcomers Cordero, Jason Frasor, Sergio Santos and Darren Oliver joining holdovers Carlos Villanueva, Luis Perez, Jesse Litsch and Casey Janssen. Toronto's relievers placed 24th in MLB with 7.5 K/9 and 21st in MLB with a 3.88 ERA in 2011. The bullpen appears considerably stronger heading into the 2012 season, but the Blue Jays' rotation doesn't boast the same depth as other American League clubs such as the Yankees, Tigers, Rays, Angels and Rangers.

Though the Blue Jays won't have to surrender a draft pick to sign Cordero, the Reds will obtain a supplementary first round pick because of the modified procedure for Type A free agents under baseball's new collective bargaining agreement.

It's been a busy week for the Blue Jays, who signed Omar Vizquel last night and extended Brandon Morrow this morning. The Cordero agreement seems to remove them from the Koji Uehara trade talk.