Nov 14: Soriano has cleared waivers and been returned to the Angels, per Jack Harris of the L.A. Times.

Nov 7: The Pirates announced that right-hander Jose Soriano has been designated for assignment.  The move opens up a 40-man roster spot for infielder Diego Castillo, whose contract has been selected to the 40-man.

Soriano threw only 3 2/3 innings for Pittsburgh’s A-ball affiliate in Bradenton this season, as the 23-year-old had to undergo his second Tommy John surgery in as many seasons.  Soriano first went under the knife in February 2020 when he was still a member of the Angels organization, but the Pirates rolled the dice and selected Soriano in last December’s Rule 5 draft.

Soriano’s latest surgery took place in mid-June, so considering the usual 13-15 month timeline for TJ recoveries and the fact that this is already Soriano’s second operation in such a brief period, it certainly doesn’t seem like he’ll see any action during the 2022 season.  It’s a brutal outcome for a youngster who showed such intriguing promise when pitching in the Angels’ farm system, as Soriano drew plenty of attention thanks to his big fastball and strikeout numbers.  Soriano has mostly worked as a starting pitcher, but he was seen as a potential power reliever or even a closer candidate thanks to his one-two punch of a fastball and curve, even if walks continued to be an issue.

Not to be confused with the veteran reliever of the same name, the Pirates’ Diego Castillo is a 24-year-old infielder who joined the organization from the Yankees this past July as part of the Clay Holmes trade.  Castillo hadn’t hit much over his first four minor league seasons, but after the canceled 2020 minor league campaign, his bat took a big step forward in his return to action.  Castillo hit .278/.355/.487 with 19 home runs in 440 total plate appearances in 2021, with those PA split over the Yankees’ Double-A team and the Pirates’ Double-A and Triple-A affiliates.

Between this development at the plate and his ability to play second base, third base, and shortstop, Castillo has put himself on the radar as a candidate to reach the majors next season.  As noted by Jason Mackey of the Pittsburgh Post-Gazette, Castillo would’ve been eligible for minor league free agency if the Pirates hadn’t put him on the 40-man roster.

Shreve has elected free agency, per Jason Mackey of PGSportsNow (via Twitter).The 31-year-old southpaw posted a 3.20 ERA/4.73 FIP across 57 appearances out of the bullpen. Shreve has suited up for the Braves, Yankees, Cardinals, Mets, and Pirates over an eight-year career.

The Pirates also added a number of players to the 40-man roster, returning most from the 60-day injured list. Steven Brault, Blake Cederlind, Dillon Peters, Jose Soriano, Duane Underwood Jr., and Bryse Wilson are all now on the 40-man roster.

JUNE 10: The Pirates selected right-hander Jose Soriano out of the Angels organization with the top pick in last December’s Rule 5 Draft, knowing at the time he still required several months of rehab following 2020 Tommy John surgery. The hope was to get some innings out of Soriano at some point this summer, but Pirates director of sports medicine Todd Tomcyzk told reporters yesterday that Soriano has new damage in his pitching elbow (Twitter link via the Pittsburgh Post-Gazette’s Mike Persak). Another surgery is now possible.

It’s a discouraging outcome for the 22-year-old Soriano, who is now nearly 16 months removed from that 2020 Tommy John procedure. He’d progressed his rehab to the point where he’d been cleared to pitch in minor league games as a ramp-up to his MLB debut, but based on his results, it’s clear that something was amiss. Soriano appeared in two games, the first of which included three shutout innings with one hit, no walks and five punchouts. In his second outing, Soriano faced 10 batters but was clobbered for seven runs on five hits and three walks while only recording two outs.

Entering the season, Soriano was ranked as the Pirates’ No. 18 prospect at Baseball America, No. 22 at FanGraphs and No. 24 at MLB.com. He’s praised as a hard-throwing righty with potential closer upside thanks to an upper-90s heater that can touch triple digits and a power curveball. His 2019 season in A-ball showed off plenty of that upside (2.55 ERA, 26 percent strikeout rate, 52.8 percent grounder rate) but also underscored one of the most pressing red flags in the righty’s outlook (15 percent walk rate).

The new injury casts doubt on whether Soriano will pitch for the Pirates in 2021 — or at all. He’s already on the 60-day injured list, so the Bucs can keep him there until season’s end without any ramification, even if he undergoes another surgery. When the offseason rolls around, however, they’d need to determine whether they want to carry Soriano throughout the winter in hopes of getting some innings from him in 2022. Soriano would retain his Rule 5 status into next season, meaning he still couldn’t be optioned to the minors until spending at least 90 days on the active roster.

If at any point the Pirates decide to cut bait, Soriano would be placed on waivers before being offered back to the Angels, who would not need to carry him on the 40-man roster.

Brewers second baseman Kolten Wong left last night’s game after three innings due to a left oblique strain, after striking out swinging in what ended up as his final at-bat of the game.  Brewers manager Craig Counsell told MLB.com’s Adam McCalvy and other reporters that “at this point, it’s day to day.  It’s not bad, but it’s concerning because it’s the same spot” that Wong previously felt a strain earlier this season.  That initial oblique issue sent Wong to the injured list and caused him to miss 11 games in April.

Wong has been a strong part of Milwaukee’s success this season, delivering his usual stellar glovework at second base while hitting .280/.343/.441 (114 OPS+, 115 wRC+) over 178 plate appearances.  Ideally, Wong could avoid the IL altogether, but even another relatively minimal absence would count as a minor victory considering how oblique injuries can often be longer-term problems.  Keston Hiura, Luis Urias, or Daniel Robertson are fill-in options at second base if Wong indeed has to miss significant time, but none can match Wong’s all-around contributions.

Some more injury updates from around the NL Central…

An abnormal number of picks from the 2020 Rule 5 Draft survived Spring Training and made the Opening Day rosters with their new clubs. The Orioles and Marlins both broke camp with a pair of Rule 5 picks on the active roster, while the Pirates opened the season with one Rule 5 pick on the roster and one on the injured list. Most clubs that are carrying a Rule 5 pick, unsurprisingly, have little in the way of postseason aspirations. There are a few October hopefuls among those still clinging to Rule 5 picks, however, and it’ll take some uncharacteristically strong Rule 5 showings for those players to survive the season.

We’ll take a look at how the surviving Rule 5 draftees are faring periodically throughout the year. Here’s the first glance…

Currently in the Majors

Returned to their original club

It’s been an offseason focused on stockpiling prospects and shedding payroll for the Pirates, but the club on Wednesday announced its first Major League free-agent signing of the winter. Left-hander Tyler Anderson has signed a one-year contract for the 2021 season, while Rule 5 righty Jose Soriano has been placed on the 60-day IL to open a spot on the 40-man roster. Anderson, a client of Beverly Hills Sports Council, is reportedly guaranteed $2.5MM on the deal. 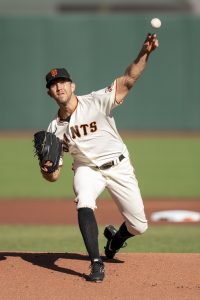 Anderson became a free agent when the Giants non-tendered him at the Dec. 2 deadline. The 31-year-old appeared in 13 of their games last season, started 11, and notched a 4.37 ERA in 59 2/3 innings. Those numbers look OK, but Anderson survived despite below-average strikeout, walk and groundball percentages of 15.8, 9.6 and 28.5, respectively. Anderson also only managed a 5.69 SIERA, which ranked next to last among 81 pitchers who amassed at least 50 innings in 2020.

Before he joined the Giants, Anderson spent 2016-19 as a member of the Rockies, with whom he largely posted acceptable production. Overall, Anderson has a 4.65 ERA/4.36 SIERA with a 21.0 percent strikeout rate and a 7.7 percent walk rate across 456 2/3 innings. The former Oregon star and first-round pick has seen his time on the mound interrupted by a series of knee injuries, by Anderson’s elbow and shoulder have held up throughout his pro career.

Anderson should fill a rotation spot this year with the non-contending Pirates, who don’t have anything resembling a front-line starter at the moment after trading away both Joe Musgrove and Jameson Taillon this winter as part of their ongoing rebuild. Anderson will join Steven Brault and Chad Kuhl as the most experienced starters on the 40-man roster in Pittsburgh, while younger arms like Mitch Keller, JT Brubaker, Wil Crowe and Miguel Yajure will vie for opportunities to prove themselves at the MLB level.