De La Cruz and Marte are certainly the most notable of the prospects added. De La Cruz is Cincinnati’s top overall prospect, and ranked 14th overall by MLB.com. Still just 20, De La Cruz made it as high as Double-A in 2022. As he has for most of his young career, De La Cruz mashed there, hitting .305/.358/.553 with eight home runs in 47 games while mostly appearing at shortstop. The Reds have been aggressive in moving their top prospect through the minors, and if he continues to rake into Triple-A next year, it won’t be long before he’s donning a Reds uniform.

Marte, 21, came across in the Luis Castillo deadline blockbuster. He hit .293/.397/.443 with four home runs in 30 games at High-A, and would seem likely to start next year at Double-A. He played shortstop during the minor league season, but has been exclusively at third base in the Arizona Fall League. While Marte is a bit behind De La Cruz, Reds fans can certainly start to dream of the pair of them playing infield in the not-too-distant future.

Of the other prospects added, Brandon Williamson is the only top ten prospect in their system, per MLB.com. He’s a left hander who made 13 starts at Triple-A, pitching to a 4.39 ERA. There’s a good chance he features at some point in 2023 in the big leagues. Elsewhere, Stoudt and Karcher are both pitchers who featured at Triple-A in 2022, while neither had dominant results, there’s a chance both would have been called upon anyway as pitching depth. Richardson is a hard-throwing right hander who’s struggled with injuries of late, but even though he’s not pitched above High-A, the Reds clearly feel his arm has enough talent to avoid risking losing him in the draft.

Aquino is the most high profile of the players cut loose by the Reds. He hit a staggering 14 home runs during August in 2019 for a .320/.391/.767 line in that period, but hasn’t hit much since. In 2022, he posted a line of just .197/.246/.363 while striking out more than a third of his plate appearances. Hoffman pitched to a 3.83 ERA across 44 2/3 innings out of the bullpen. Both players were arbitration eligible and non-tender candidates, so it’s not surprising to see them cut loose to open up valuable 40-man spots.

Solomon, Law, Dowdy and Warren all pitched a handful of innings each out of the Reds’ bullpen, but none had much success, and all seemed like near-certain DFA candidates as the Reds look to make room for their young prospects.

The first major starting pitching trade has been made, as the Mariners and Reds announced a deal sending two-time All-Star Luis Castillo to Seattle. In exchange, the Reds bring back four prospects — highly-regarded infielders Noelvi Marte and Edwin Arroyo and right-handers Levi Stoudt and Andrew Moore. Cincinnati has selected the contract of reliever Ryan Hendrix to take Castillo’s roster spot.

Castillo had been perhaps the prize of this year’s rotation market. After missing a few weeks due to shoulder soreness to open the year, Castillo made his season debut in early May and has looked like a bona fide top-of-the-rotation arm. He’s made 14 starts and worked 85 innings, pitching to a 2.86 ERA despite playing his home games in one of the league’s more hitter-friendly parks. Castillo has punched out a quality 25.8% of opposing hitters against a solid 8% walk rate. This season’s 47.1% grounder percentage is down a bit relative to his 2019-21 levels, but it remains a few points better than the league average. 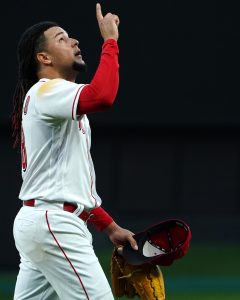 That kind of high-end production is about what we’ve come to expect from Castillo, who has cemented himself as one of the sport’s top arms over the past few seasons. He’s posted an ERA under 4.00 in each of the last four years, carrying a cumulative 3.49 mark in 91 starts since the beginning of the 2019 campaign. That’s 24th among 98 qualified starters over that stretch. His 26.8% strikeout rate ranks 23rd among that group, and he’s 12th with a 14.2% swinging strike percentage (whiffs per pitch). He’s complemented the strikeout stuff with a massive 54.8% ground-ball percentage that ranks among the top ten.

Few pitchers can match Castillo’s combination of whiffs and grounders, and the 29-year-old backs it up with an impressive arsenal. He’s one of the harder throwing starters, averaging just shy of 97 MPH on both his four-seam and sinker. Castillo’s bread-and-butter secondary pitch, his changeup, is among the game’s top offspeed offerings, and he’s gotten strong results on his slider as well.

Castillo will move to the front of a rotation that suddenly looks to be one of the more fearsome in the sport. The M’s signed reigning AL Cy Young winner Robbie Ray to a five-year deal over the winter, and second-year hurler Logan Gilbert has a 2.78 ERA through 21 starts. Rookie George Kirby, who was generally considered among the top handful of pitching prospects entering the season, has a 3.50 ERA through his first 13 big league outings. Chris Flexen and Marco Gonzales aren’t high-strikeout arms, but they’re more than capable back-of-the-rotation types.

Seattle will want to keep an eye on the innings totals for Gilbert and Kirby, so there’d have been sense in even adding a stable back-end arm. Instead, president of baseball operations Jerry Dipoto and his staff swung bigger to bolster the 54-46 club they expect to snap the franchise’s two-decade playoff drought. Should they make the postseason, the front office and fanbase alike would no doubt feel strongly about their ability to match opponents’ top three arms with Castillo, Ray and Gilbert.

The deal is about more than just the 2022 season, as Castillo will be arbitration-eligible for a final time this winter. He’s making $7.35MM this year, around $2.75MM of which has yet to be paid out. He’ll earn a decent raise in arbitration but still have a plenty affordable salary — likely around the $12MM range. That’s an obvious bargain for a pitcher of his caliber, making a year and a half of his services incredibly valuable.

That’s reflected in the return, which looks very strong. Marte and Arroyo were the top two prospects in the Seattle system on Baseball America’s most recent top 100, respectively checking in 47th and 48th in the league. Marte, the most well-known of the group, entered the season ranked among the game’s top 15 farmhands in the estimation of each of Keith Law of the Athletic, FanGraphs and Kiley McDaniel of ESPN.

A 6’3″ infielder out of the Dominican Republic, Marte is universally projected as a possible plus power hitter capable of racking up 25 or more home runs annually at his peak. He has played exclusively shortstop in the minors, and while evaluators suggest he might eventually grow off that position, he’s expected to stick on the infield as a possible above-average third baseman. He’s spent the year in High-A as a 20-year-old, putting up an impressive .270/.360/.460 line with 15 homers, a strong 10.8% walk rate and a manageable 21.1% strikeout percentage through 389 plate appearances.

Arroyo, 18, was Seattle’s second-round pick in last year’s draft. The Puerto Rico native has already notably elevated his stock in his first full professional season, raking at a .316/.385/.514 clip in Low-A. He’s collected 13 homers and 19 doubles and stolen 21 bases. That kind of offensive performance was unexpected, as the switch-hitter entered the season more well-regarded for his potential plus defense at shortstop than his bat.

Stoudt recently checked in as the M’s #10 prospect, per Baseball America. The 24-year-old righty has struggled at Double-A this year, pitching to a 5.28 ERA across 87 innings. He has a slightly below-average 22% strikeout rate and a tiny 5.9% walk percentage that look more palatable, however. BA writes that he works in the 94-98 MPH range with his fastball and has a solid array of secondary offerings, led by his changeup. The 2019 3rd-round pick will have to be added to the 40-man roster this offseason to keep him from being selected in the Rule 5 draft. He’s regarded as a possible back-of-the-rotation starter.

Moore, not to be confused with the former Seattle starter of the same name, was a 14th-round pick out of junior college last year. The 22-year-old righty has worked exclusively out of the bullpen in Low-A, posting a 1.95 ERA through 32 1/3 innings with a ridiculous 43.6% strikeout rate. He’s generally facing younger competition and has walked almost 13% of opponents, but BA recently wrote that he features a 95-97 MPH fastball and a swing-and-miss breaking pitch. He’ll add an interesting lower level bullpen arm to the Cincinnati system.

The trade — which marks the second time in four months these two teams have lined up on a blockbuster — will have plenty of repercussions. Seattle’s decision to push in arguably their top two prospects for one of the sport’s best starters reinforces that the M’s view themselves as a legitimate contender in the American League. It also seemingly signifies they’re out of the running for Juan Soto, although there’s still plenty of upper level talent for Dipoto and his group to further bolster the roster over the next three days. Second base looks like a possible target area, as does backup catcher. Castillo, though, figures to be the splash — the impact addition designed to put a team that’s generally strong around the diamond over the top.

As for the Reds, it’s the second (and likely most notable) trade they’ll make this week as they strip down the big league roster in search of future talent. Castillo’s former rotation mate Tyler Mahle could soon join him in being moved for a marquee return (although not likely one as strong as this). Rental hitters like Brandon Drury and Donovan Solano won’t recoup a franchise-altering package, but there’s little reason for them not to join Tyler Naquin and Castillo in changing clubs.

With Castillo off the market, Mahle and A’s hurler Frankie Montas become the top two rotation trade candidates, in addition to a handful of high-impact arms who might be available despite having control windows extending beyond 2023. Teams like the Yankees, Cardinals, Rangers and Twins are known to be in the market for rotation help. Mark Feinsand of MLB.com tweets that 12 teams were in contact with the Reds about Castillo and suggests the Yankees’ offer was close to the quality of Seattle’s. Ken Rosenthal of the Athletic indicates Texas made a strong push as well. In the end, the Mariners put the best offer on the table, leaving plenty of others to look elsewhere over the next 72 hours.