White Sox great Paul Konerko’s number will be retired today, as Bruce Levine of CBSChicago.com notes. Since retiring last season, Konerko says, he has watched the White Sox on occasion but hasn’t spent much time watching baseball. He did, however, attend Wayne Gretzky’s fantasy hockey camp, and he has three young children. “A lot of guys I talked to said, ’Listen, you have to find things to do,'” says Konerko. “When you go home, they said, ’You can only play so much golf.’ I definitely have a lot of stuff going on to keep me sharp.” Here’s more from the American League.

The Yankees’ offense may be struggling, but former catcher Jorge Posada says that he wouldn’t be much help if he suddenly came out of retirement.  “I can’t play that game anymore,” Posada told Mitch Abramson of the Daily News at last night’s Miguel Cotto-Sergio Martinez fight at Madison Square Garden. “It’s too fast. They’re throwing too hard. I’m happy. I think my decision was great. I couldn’t play that game anymore. It’s a tough sport.”  More from around baseball:

As we work on catching up on things after a busy few days, here's the latest from the AL Central, which has been among the game's busiest divisions of late: 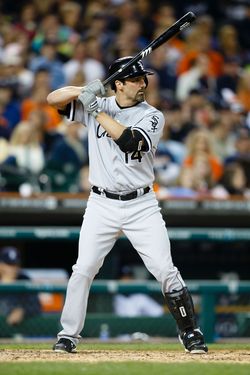 White Sox GM Rick Hahn says that the intensity of trade talks has picked up in the past few days, according to Scott Merkin of MLB.com (Twitter links).  "We well could have something in the next day or it could take through Orlando (Dec. 9-12) when the logjam sort of breaks,” Hahn said.  More out of the AL Central..

The Tigers announced today that Miguel Cabrera underwent successful core muscle repair surgery (a.k.a. sports hernia surgery) this morning. The operation was performed by Dr. Bill Meyers in Phialdelphia, and Cabrera's timetable for recovery is expected to be six to eight weeks. The Tigers anticipate that their perennial MVP candidate will be healthy in time for Spring Training. Here's more out of the AL Central…