Randy Johnson, Pedro Martinez, John Smoltz and Craig Biggio have been elected to the Baseball Hall Of Fame by the Baseball Writers Association Of America.  All were inducted in their first year of eligibility except for Biggio, who was on the ballot for the third year.

Perhaps the best left-handed pitcher of all time, Johnson recorded 4875 career strikeouts over his career (second only to Nolan Ryan) and his 10.61 K/9 rate is the highest in baseball history.  “The Big Unit” was a fearsome figure on the mound, standing at 6’10” and throwing a 100-mph fastball that helped him win 303 games and five Cy Young Awards over his 22-year career.  Johnson played for six teams in his career but is mostly remembered as a Mariner (10 seasons) and as a Diamondback (eight seasons).  His time in Arizona was punctuated by a perfect game in 2004 and sharing World Series MVP honors with Curt Schilling when the D’Backs won it all in 2001.  Johnson accumulated 111.7 fWAR (fifth all-time amongst pitchers) and 104.3 rWAR (ninth) over his career.

Martinez won three Cy Young Awards over his 18 MLB seasons and is a revered figure in Boston for helping the Red Sox break their World Series jinx in 2004.  Martinez collected 219 wins, 3154 strikeouts over his career and he posted the best ERA+ (154) of any starter in history.  Martinez’s 1999 and 2000 seasons are arguably the two greatest pitching seasons in baseball history — despite home games in hitter-friendly Fenway Park in the midst of the steroid era, Martinez posted a 1.90 ERA, 12.5 K/9 and 8.65 K/BB rate over 430 1/3 IP over those two seasons, plus an uncanny 215 ERA+.  While he threw “only” 2827 1/3 innings over his career, much less than many other all-time greats, Martinez still finished with 87.1 fWAR (16th all-time) and 86 rWAR (17th).

After falling just two votes shy of induction to the Hall last winter, Biggio is finally on his way to Cooperstown.  Biggio spent all 20 of his seasons with the Astros, forming “the Killer B’s” with Jeff Bagwell and other notable B-named teammates like Derek Bell and Lance Berkman in the Houston lineup.  Biggio’s 3060 career hits rank him 21st all-time in baseball history and he posted a career slash line of .283/.363/.433 with 291 homers, 1844 runs and 414 steals.  He finished with 65.1 WAR for his career according to both Fangraphs (which places him 84th among position players) and Baseball-Reference (92nd).

Stepping into Biggio’s shoes this year was catcher Mike Piazza, who just missed election but could be set up for a successful run next time around. He played in 16 big league seasons, racking up a lifetime .308/.377/.545 slash and 427 home runs while spending the vast majority of his time behind the dish. He tallied 59.4 rWAR and 63.5 fWAR when his defense and baserunning were accounted for, easily placing him within the ten most productive backstops of all time. Piazza certainly has a claim as the best-hitting catcher in MLB history, as his lifetime 140 wRC+ trails only the still-active (and still in-prime) Buster Posey.

Ten years ago today, the Diamondbacks’ Randy Johnson tossed a perfect game against the Braves. The Big Unit was fairly blunt when asked to reflect upon his gem by MLB.com’s Steve Gilbert. “That’s the one thing that I’ve noticed since I’ve stopped playing baseball is that I’m getting older, because time just doesn’t stop,” Johnson said. “Next thing you know we’re having a 10-year anniversary for the World Series and now a 10-year anniversary for my perfect game. It just doesn’t seem that long ago that I threw that perfect game. Although it does feel like 10 years as far as me remembering details of it, because I don’t remember many of the details of the game.” Johnson (owner of 303 wins, five Cy Young Awards, and second place on the all-time strikeout list) will be on his first Hall of Fame ballot next year and is keeping busy in retirement with photography and traveling in support of the USO.

In news and notes from the National League’s West Division: 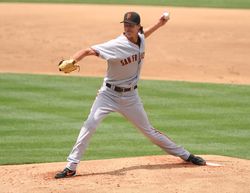 Thanks to Cot's Baseball Contracts for the info.

4:04pm: Ken Rosenthal of FOX Sports tweets that the conference call has been moved up to tonight, and that The Big Unit will indeed announce his retirement.

2:47pm: According to Bob Nightengale of USA Today (via Twitter), it appears that Randy Johnson will announce his retirement tomorrow morning.  A bunch of other reporters are talking about tomorrow's poorly-timed conference call as well.

More links for the evening…

The Giants did not offer arbitration to any of their free agents – Type A catcher Bengie Molina and Type Bs Bob Howry, Randy Johnson, and Randy Winn.  It's a mixed result for Molina – he's more attractive to other teams (the Mets, for example) now that he will not cost a draft pick, but if he'd been offered and accepted arbitration he probably would've maximized his 2010 salary.

Andrew Baggarly of the San Jose Mercury News reports that the Giants are open to bringing Bengie Molina back, but prepared in case the catcher signs elsewhere. Here are the details: