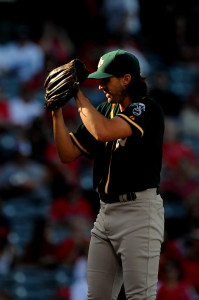 A’s southpaw Barry Zito tossed four innings tonight in what could be his final Major League appearance, although the veteran lefty isn’t officially calling it a career yet, tweets MLB.com’s Jane Lee. Zito says that while he won’t yet announce his retirement, he does feel “complete” and is likes the idea of spending time with his family. If this is indeed it for Zito, the game had somewhat of a full-circle slant to it. As Melissa Lockard of OaklandClubhouse.com notes (via Twitter), Zito’s final start would be closed out by Sean Doolittle, whom the Athletics drafted with the compensation pick they earned upon Zito’s free agent departure.

Barry Zito tossed an inning in the Athletics’ 5-1 loss to the Astros today, marking his first Major League appearance since 2013.  It wasn’t exactly a triumphant return (Zito allowed a hit, a walk and a two-run homer to Colby Rasmus in his one inning) but it still represented a milestone for the veteran southpaw, who worked his way back to the Show after sitting out 2014 and spending most of this season at Oakland’s Triple-A affiliate.  Here’s more from around the game as we begin a new week…

Mariners right-hander Tony Zych made his Major League debut on Friday night and gained an unusual distinction in the process.  Of the thousands of players who have appeared in an MLB game, Zych is now alphabetically last on the list, replacing past Dutch Zwilling (who last played in 1916).  “Breaking a record is pretty cool. I really didn’t have to do much for that one,” Zych tells Bob Dutton of the Tacoma News Tribune.  As Dutton notes, the Mariners have also previously employed the first player alphabetically in baseball history (David Aardsma) and the first player with a hyphenated name (Ryan Rowland-Smith).  Here’s more from around the AL West…

With Aaron Brooks headed to Triple-A Nashville, the Athletics will need a starter sometime in the next few days. That could be A’s veteran Barry Zito, Susan Slusser of the San Francisco Chronicle reports. The 2002 AL Cy Young winner and three-time All-Star hasn’t appeared in the big leagues since 2013, but he’s pitched 137 innings for Triple-A Nashville this year, posting a 3.48 ERA, 5.9 K/9 and 3.9 BB/9. Zito had been scheduled to start for the Sounds on Saturday, but Sean Nolin will take the ball instead, and Zito is no longer listed among the Sounds’ upcoming probable pitchers. Zito has also briefly missed time recently with a shoulder injury, althoug Slusser characterizes that issue as “extremely minor.” Here’s more from the West divisions.

Today marks the 55th birthday of Padres great Tony Gwynn, a birthday that provides opportunity for reflection after Gwynn’s untimely death from cancer last June. Gwynn’s son Tony Gwynn Jr., currently an outfielder for the Triple-A Syracuse Chiefs in the Nationals system, says he had trouble coming up with a specific tribute to his father for his team’s game against Durham today, Kirk Kenney of the San Diego Union-Tribune writes. The younger Gwynn notes that his father’s general policy was to “show up, do your job and go home.” Gwynn Jr. did, however, end up with two singles in five at-bats, which seems about right as a nod to his dad. Here’s more from the West divisions.

END_OF_DOCUMENT_TOKEN_TO_BE_REPLACED

Now with the Angels, infielder Johnny Giavotella is hoping for another chance in the Majors, MLB.com’s Alden Gonzalez writes. Giavotella collected 465 plate appearances in parts of four seasons with the Royals, but never quite caught on, hitting .238/.277/.334 in the process before joining the Angels in a minor trade this winter. “In my opinion, Triple-A to the big leagues is the biggest jump, and there is an adjustment period to be had,” Giavotella says. “I never feel like I got that adjustment period to fail and make that adjustment.” Giavotella, who is out of options, is competing with Josh Rutledge, Grant Green and Taylor Featherston for the Angels’ second base job, which opened when the team traded Howie Kendrick to the Dodgers. Here’s more from the American League.