Free agent catcher Taylor Teagarden has received an 80-game suspension for violating the league’s PED policy, per a league announcement.

The eight-year MLB veteran — who appeared briefly last year with the Cubs — was shown in an Al Jazeera documentary late last year discussing his apparent use of PEDs. It’s unclear whether that evidence provided the basis for his suspension, though the announcement does not refer to any failed tests or alternative grounds for the decision.

Major league baseball has teamed up with the United States Anti-Doping Agency (USADA) to investigate the allegations against Teagarden and others in the above-noted report, which also cited long-time major leaguers Ryan Zimmerman and Ryan Howard — along with stars from other sports — as possible PED offenders.

Of course, it’s important to note that the documentary did not provide anything close to the same level of evidence against those other players as it did with regard to Teagarden, who was surreptitiously taped by a British track athlete posing as an interested PED buyer. Both Zimmerman and Howard have filed a lawsuit alleging defamation against the news agency, while the league has yet to give any indication as to the status of its investigation into the two veterans.

Tegarden, 32, had not signed with an organization when the report aired, and perhaps unsurprisingly has yet to do so since. He has topped 100 plate appearances in a single season only once — back in 2009 with the Rangers — but has been a popular depth piece for quite some time. There’s some pop in his bat, but Teagarden also carries a 34.5% career strikeout rate. All told, he owns a .202/.260/.376 batting line with 21 home runs over 563 major league plate appearances. 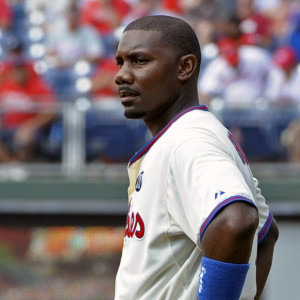 Let’s check in on the day’s minor moves …

The Cubs announced that they have designated Taylor Teagarden for assignment.  In a related move, left-handed pitcher Clayton Richard has been recalled from Triple-A Iowa.

Here are today’s minor moves from around the league, with the most recent updates at the top.

A total of 43 players have elected to become minor league free agents, according to Baseball America’s Matt Eddy in his latest round-up of minor league transactions.  MLBTR has already reported on some of these moves over the last few days, and here is the rest of the list, with players grouped by their most recent team…

Dan Jennings was a guest on MLB Network Radio’s Front Office show this morning, and the Marlins GM told hosts Jim Duquette and Jim Bowden (as per Bowden’s Twitter account) that owner Jeffrey Loria is willing to “open the checkbook” to make additions before the trade deadline.  Miami began the season with one of the league’s lowest payrolls at just under $46MM, yet despite losing ace Jose Fernandez to Tommy John surgery, the Fish began the day just 1.5 games out of first place in the NL East.  The Marlins could be looking to take advantage of their surprising good form, as Nick Cafardo of the Boston Globe reported earlier today that Miami has been as aggressive as any team in scouting for upgrades.

Here’s some more from around the NL East…

Here are today’s minor league transactions from around baseball, with the latest moves at the top of the post…

FRIDAY: Joel Sherman of the New York Post reports (on Twitter) that Teagarden will earn $725K if he makes the Major League roster and can earn $25K for appearing in 60 and 80 games. He can also opt out of his contract if he's not in the Majors by June 15.

MONDAY: The Mets announced that they have signed catcher Taylor Teagarden to a minor league contract with an invitation to Spring Training. The 30-year-old Teagarden is a client of the Boras Corporation.

Teagarden, a former third-round pick and Top 100 prospect (per Baseball America) has spent time at the Major League level in each of the past six seasons. He's totaled 518 plate appearances between the Rangers and Orioles in those eight seasons, producing a .206/.266/.390 batting line with 20 home runs. With the Mets, Teagarden figures to compete with Anthony Recker to serve as the primary backup to Travis d'Arnaud, who should be New York's everyday catcher in 2014.