Here were this week’s five biggest stories here at MLBTR. 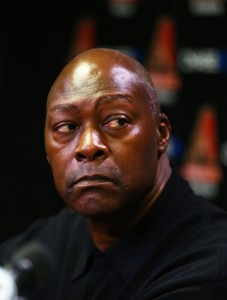 The Diamondbacks clean house. The Diamondbacks parted ways with GM Dave Stewart and manager Chip Hale following a disastrous 69-93 season for which they’d prepared by spending very heavily, both in money and prospects. Chief Baseball Officer Tony La Russa remains in the organization, but will no longer run the team’s baseball operations. Ned Colletti, Kim Ng and a variety of executives with Diamondbacks ties are reportedly among the candidates to replace Stewart (who took to the media to discuss his firing).

Tigers exercise Brad Ausmus’ option. As of early this week, Tigers manager Brad Ausmus still hadn’t heard whether the team planned to retain him for 2017. But the Tigers finally ended speculation about Ausmus’ future — or at least his immediate future — by announcing that they had exercised his 2017 option. His outlook beyond next season remains unclear.

Marlins part ways with Barry Bonds. The Marlins are going in a different direction at hitting coach, electing not to renew the contract of legendary slugger Barry Bonds. Reporting from Craig Mish of MLB Network Radio indicated that there was at least some friction between Bonds and manager Don Mattingly. The Marlins also parted ways with third base coach Lenny Harris and bullpen coach Reid Cornelius.