The Mets are in agreement on a contract with free-agent lefty Justin Wilson, reports Ken Rosenthal of The Athletic (Twitter link). The ACES client’s contract is still pending the completion of a physical. Assuming that checks out, he’ll be paid a total of $10MM over two years, per Fancred’s Jon Heyman (Twitter link). 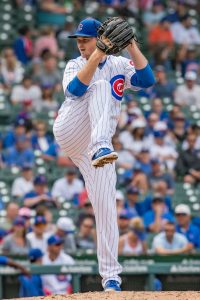 Wilson, 31, will give the Mets a much-needed lefty to a bullpen where the previous top options included an inexperienced Daniel Zamora and non-roster invitee Luis Avilan. It’s possible that one or both of those southpaws will still pitch alongside Wilson in the ’pen, but the veteran Wilson will help to solidify the area of need and provide plenty of strikeouts along the way.

Wilson is coming off an up-and-down tenure with the Cubs, with whom he posted a strong 3.41 ERA and averaged 11.4 K/9 last season. While control was an issue early in his Cubs tenure, he righted the ship in that regard over the course of the 2019 season; after walking 30 hitters in his first 26 1/3 innings as a Cub, Wilson regained his control and issued a vastly more manageable 22 walks in his final 46 innings of work in ’18. Left-handed batters, in particular, struggled against Wilson this past season, hitting just .188/.301/.342. He’s been far more than a specialist throughout his career, however, holding right-handed opponents to a .210/.305/.323 line in parts of seven Major League seasons.

The addition of Wilson is the third notable pickup for the Mets and new GM Brodie Van Wagenen this winter, as they’ve previously acquired Edwin Diaz in a blockbuster trade with the Mariners and re-signed Jeurys Familia to a three-year, $30MM contract as well. That newly acquired trio (re-acquired — in Familia’s case) will be joined by righties Seth Lugo and Robert Gsellman in anchoring what should be an improved Mets bullpen in 2019.

With the signing, Wilson becomes the tenth free-agent reliever to sign a multi-year contract this offseason and the second to do so with the Mets (joining Familia). Adding an annual $5MM salary to the mix will push the Mets’ payroll a bit further north. While they’ll technically be on the hook for upwards of $163MM in 2019, they’ll also receive substantial compensation from insurance policies on both David Wright and Yoenis Cespedes. At present, including the Wilson signing and the insurance money they’ll recoup from Wright and Cespedes, the Mets project to a roughly $149MM payroll, per Roster Resource’s Jason Martinez.