The White Sox announced that they’ll promote top pitching prospect Dylan Cease to start Game 1 of Wednesday’s doubleheader against the Tigers. The right-hander is already on Chicago’s 40-man roster, so it won’t need to make a corresponding move in that regard. 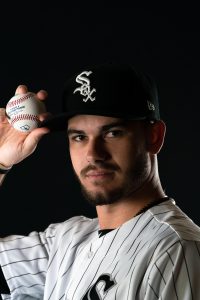 Cease joined the White Sox in July 2017 in a trade that could make a huge long-term impact for the Pale Hose. They acquired Cease and outfield prospect Eloy Jimenez from the crosstown rival Cubs for left-hander Jose Quintana. Jimenez is already a mainstay in the White Sox’s lineup as a 22-year-old rookie, and Cease could soon join him as a staple on their roster for the foreseeable future. Indeed, manager Rick Renteria told reporters the plan is for Cease to stay in the fold going forward.

The 23-year-old Cease is widely regarded as an elite pitching prospect, with MLB.com rating him the 18th-best farmhand in the game. Cease possesses a dominant fastball/curveball combination, Jim Callis and Jonathan Mayo of MLB.com write in their free scouting report.

Should Cease offer similar production in his first taste of the majors, it would be welcome for Chicago, whose rotation has been atrocious this season. The club looks to have found an ace in breakout righty Lucas Giolito, but he has been the lone bright spot among its starters. Carlos Rodon struggled earlier this year before undergoing season-ending Tommy John surgery in May. Likewise, Reynaldo Lopez, Ivan Nova, Manny Banuelos and Dylan Covey have fallen flat in an extensive number of starts, and no one else the Sox have plugged in has helped their cause either.

With Cease, Giolito and prized young righty Michael Kopech, who’s recovering from September 2018 TJ surgery, the club may be laying the foundation for an enviable rotation. Those three could occupy 60 percent of Chicago’s starting staff in a year. For now, though, Cease will try to earn a spot on a team that’s 6 1/2 games back of a playoff spot and still has a glimmer of a chance to make things interesting this season.