12:49PM: The trade has been officially announced by both teams.

11:35AM: The Yankees have worked out a deal to acquire right-hander Jameson Taillon, Jason Mackey of the Pittsburgh Post-Gazette reports.  The Pirates will receive four prospects in return.  ESPN.com’s Jeff Passan (Twitter link) reports that the minor leaguers in question are right-handers Miguel Yajure and Roansy Contreras, infielder Maikol Escotto and outfielder Canaan Smith.

Multiple reports broke yesterday that a Taillon trade was nearing completion, with the Yankees emerging as the favorites to land the 29-year-old.  According to Mackey, “at least three clubs” submitted offers for Taillon, but it was indeed New York who eventually landed the right-hander. 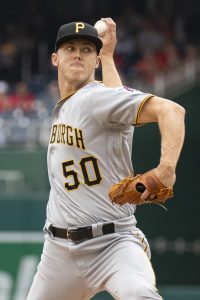 Taillon joins a Yankees rotation that is headlined by Gerrit Cole, and otherwise has a lot of upside but an equal number of question marks.  Corey Kluber has two AL Cy Young Awards on his resume but also has barely pitched in two seasons due to injuries, Luis Severino won’t return from Tommy John surgery rehab until midseason, Domingo German didn’t pitch in 2020 due to a domestic violence suspension, and the likes of Jordan Montgomery, Deivi Garcia, Clarke Schmidt or Michael King are lacking in MLB experience.

Taillon is himself not exactly a sure thing, as he didn’t pitch in 2020 (and threw only 37 1/3 innings in 2019) due to Tommy John surgery.  This was the second TJ procedure of Taillon’s career, following an earlier surgery during his days as a star prospect in Pittsburgh’s farm system.  While there is risk involved in the acquisition, the Yankees are betting that Taillon is healthy and can match or surpass the form he has showed over his 466 career innings.

Drafted second overall in 2010, Taillon has posted a 3.67 ERA, 21.5K%, and 15.5K-BB% over his Major League career.  While not a big strikeout pitcher, Taillon has a mid-90’s fastball, strong control, the ability to keep the ball on the ground (career 48.2% grounder rate) and does a good job of limiting hard contact.

The other important numbers from the Yankees’ perspective were two (as in the number of years of team control remaining over Taillon) and $2.25MM, which is what Taillon is set to earn in 2021.  The Yankees are known to be looking to stay under the $210MM luxury tax threshold and reset their tax penalties to zero, so there is added value for the team in acquiring a potential No. 3 or even a No. 2 starter at such a low financial cost.  According to Roster Resource’s projection, the Yankees are now less than a million dollars under the $210MM mark, so some creativity will be required if the team is going to make any more additions.

Contreras and Yajure were also both on the 40-man roster, so the Yankees have now opened spots up for Taillon and for one of Kluber or DJ LeMahieu, whose signings have yet to be officially announced by the team.

For the Pirates, this is the latest big move of a rebuild that has already seen Joe Musgrove and Josh Bell dealt in respective trades with the Padres and Nationals this winter.  There was no pressing payroll concern surrounding Taillon, but since the Bucs look to be more than two years away from contending, it made sense for the team to shop the righty now rather than risk an injury setback or poor performance from Taillon during the season.

For Musgrove, Bell, and now Taillon, the Pirates have added 11 young players to their organization via the three trades.  Similar to the Musgrove deal with San Diego, Pittsburgh received a larger package of prospects rather than a singular blue-chip talent, but it would be incorrect to say that the Pirates opted for quantity over quality.  Yajure (#15), Contreras (#19) and Smith (#21) were all ranked on MLB.com’s list of the top 30 prospects in the New York farm system.

Yajure made his Major League debut in 2020, posting a 1.29 ERA over seven relief innings while recording eight strikeouts and five walks.  Control wasn’t really a problem for Yajure over his minor league career, with only a 5.9BB% to go along with a 2.47 ERA and 20.8K% over 291 2/3 innings.  The 22-year-old also had a knack for keeping the ball in the park, with only 10 homers allowed during his minor league career.

Yajure started 54 of 61 minor league outings, and MLB Pipeline’s scouting report says he “has a high floor as a likely No. 4 or 5 starter.”  He could be a candidate for action in the Pirates’ rotation this season, but since he has yet to pitch at the Triple-A level, Yajure will probably begin the year in the minors.

Contreras, 21, was a product of the 2016 international draft class and has yet to pitch beyond the A-ball level, but he has a 3.25 ERA over 249 1/3 innings, starting 47 of 50 games.  There is some doubt as to whether or not Contreras will stick as a starter or be moved to the bullpen, according to MLB Pipeline, since he doesn’t record many strikeouts (20.1K%) and is “a flyball pitcher without much life on his fastball.”  Both his fastball and changeup receive a 55 on the 20-80 scouting scale, however, and his fastball averages in the 92-95mph range with some quality spin rate.

Smith was a fourth-round pick in the 2017 draft, and the 21-year-old has already shown an aptitude for getting on base.  Smith has hit .280/.389/.426 over 936 plate appearances in his young career, reaching as high as the A-ball level in 2019.  His left-handed swing doesn’t have much loft, as per Pipeline, but his slugging percentage did jump upwards to .465 in 2019.  Smith has played mostly left field and is an average defender overall, and he has shown good skill as a baserunner in stealing 21 bases in 28 chances despite average speed.

An international signing out of the Dominican Republic, the 18-year-old Escotto hit .315/.429/.552 over 218 PA in Dominican Summer League action in 2019.  Baseball America ranked Escotto 27th on their list of Yankees prospects, citing his “compact swing” and “solid plate discipline” and also describing him as a plus runner and plus defender.  Escotto played mostly second base in the DSL but also saw action as a third baseman and shortstop.