MLBTR’s Tim Dierkes will interview Peter Gammons of MLB Network tomorrow, and if you have any particular questions you’d like Tim to ask the Hall of Famer we’d like to hear them. To get in touch you can leave a comment below, reach us on Twitter (@mlbtraderumors) or use MLBTR’s contact form. Here are today’s links… 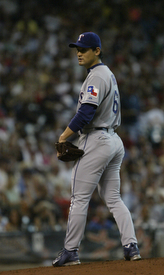 A few weeks ago we found out that Chan Ho Park, now 37 years old, had decided to sign with the Orix Buffaloes rather than continue his MLB career. The contract will pay him a little over $1MM, a pittance compared to the more than $85MM that Baseball-Reference.com says he’s banked in a big league career that spanned parts of 17 seasons. The vast majority of that $85MM comes from the five-year, $65MM deal with the Rangers, a contract that was signed nine years ago today.

Texas was coming off a 73-win season and a last place finish in the AL West in 2001, when an Alex Rodriguez led offense was unable to overcome a pitching staff that allowed 968 runs. Park, 28 at the time, had just wrapped up an All-Star season with the Dodgers that saw him post a 3.50 ERA with 8.4 K/9 and 3.5 BB/9 in 234 innings. Over the previous five seasons, CHoP pitched to a 3.79 ERA with similar peripheral stats in over 1,000 innings with the Dodgers, throwing no fewer than 190 innings in each season. All it took was what was then one of the largest pitching contracts in baseball history to bring the two sides together.

Named the Opening Day starter in 2002, Park made a poor first impression with his new team. He allowed six runs in five innings against the A’s, and overall he pitched to a 5.75 ERA with 7.5 K/9 and 4.8 BB/9 in 145 2/3 innings that year. After all those years of 190+ innings, Park visited the disabled list twice that season, once for blisters and once for a hamstring strain.

Just a day before the ’05 trade deadline, the Rangers traded Park to the Padres for Phil Nevin, agreeing to pay $2MM of his 2006 salary. He fared a little better in San Diego but it didn’t matter. Texas had invested approximately $47.4MM in Park, and in exchange they received 380 2/3 innings with a 5.79 ERA and equally depressing peripheral stats (6.6 K/9, 4.5 BB/9). Homer prone even during his time with the Dodgers, Texas’ home park only exacerbated the problem. From 2002-2004, Park allowed one long ball for just about every 5 2/3 innings pitched.

Pitching contracts are inherently risky just because of the injury potential, and Park showed that. Throwing a baseball that hard and that often is an unnatural act and guys who do it for a living tend to get hurt, it’s simply part of the game. Unpredictability is another part of it. Park was an above-average workhorse starter during his five years prior to signing with Texas, and in fact his core stats (3.79 ERA, 8.1 K/9, 4.1 BB/9) during his last five seasons with the Dodgers look a whole lot like the last five years of Carlos Zambrano’s career (3.70 ERA, 7.7 K/9, 4.3 BB/9). He was just unable to sustain that performance in a new league and in a new park while battling injuries. As always, the lesson is: buyer beware.

Park still had enough left in the tank to function as a National League middle reliever, but he's chosen to play in Japan instead.  The Buffaloes recently added Alfredo Figaro out of the Tigers' system as well.

If this is it for Park's Major League career, he finishes with a 4.36 ERA and 124 wins in 1,993 innings for the Dodgers, Rangers, Padres, Mets, Phillies, Yankees, and Pirates.  Unfortunately, he is best known for a disastrous five-year, $65MM deal signed with the Rangers nine years ago.

6:49pm: The Pirates' interest in Chan Ho Park appears to be cooling, according to MLB.com's Jenifer Langosch.

4:34pm: The Pirates have inquired on Aaron Heilman as a reliever, MLBTR has learned. Dejan Kovacevic of the Pittsburgh Post-Gazette reports (on Twitter) that the Pirates are not targeting Matt Guerrier.

1:42pm: The Pirates are showing interest in and making offers to a number of free agent relievers, tweets Ken Rosenthal of FOX Sports.  He says they were in on J.J. Putz before he reached an agreement with Arizona and are looking at guys like Kevin Gregg.  I'm told the Pirates showed lukewarm interest in Hiroyuki Kobayashi, only on a minor league deal.

The Pirates already have Evan Meek and Joel Hanrahan as closer candidates, so it appears they're trying to once again build a late-inning reliever surplus.  It worked well with Octavio Dotel this year.

Links for Wednesday, the second day of the GM Meetings, as Ron Gardenhire and Bud Black take home Manager of the Year honors…

Trevor Hoffman told MLB.com’s Barry Bloom that he wants to test free agency before deciding whether to play in 2011. If he sees an offer he likes, the 43-year-old could return for a 19th season. If not, the all-time saves leader says he’s prepared to retire.

Hoffman has drawn preliminary interest from a number of teams, according to his agent. Rick Thurman, who also represents free agents Brian Fuentes, Arthur Rhodes, Will Ohman, Octavio Dotel and Chan Ho Park, spoke with the D’Backs last Friday about potential fits for their bullpen.

That’s one possible destination for Hoffman, who can envision playing in Arizona under Kevin Towers, the D’Backs GM who ran the Padres when Hoffman pitched in San Diego. Towers repeated that re-building the bullpen is a priority for the D’Backs this offseason, but Hoffman isn't sure how much interest he'll draw.

"I'm coming off a tough year,” Hoffman told MLB.com. “I don't know if people are going to be turned off by that or not. I hope the strong second half I had will compensate."

Hoffman won’t find many closing jobs available outside of Arizona, but there are many potential closers available, as MLBTR’s Tim Dierkes pointed out yesterday. Though he started slowly, Hoffman recovered to pitch considerably better after early May. ESPN.com’s Keith Law warned interested teams about the risks associated with Hoffman earlier today. However, Towers told Nick Piecoro of the Arizona Republic that "you'd be nuts if you didn't at least consider somebody like Trevor Hoffman" (Twitter link).

This season hasn't gone according to plan for Chan Ho Park, who is currently with the Pirates after being designated for assignment by the Yankees, but he told MLB.com's Jenifer Langosch that he's leaning towards playing at least one more season. If he does return, he'd be willing to remain in Pittsburgh if there's mutual interest…

"It's a good team with a good future," Park said. "If I play for this team next year, a .500 or winning record is going to be a big goal for this team. I want to be a part of that and have that. We have so much talent here."

GM Neal Huntington left the door open for a reunion, but the two sides haven't talked about anything definitive yet. The club likes the way he has mentored the young pitchers on the staff.

Park indicated that a guaranteed contract would certainly tilt the scales towards a return. Money might not be of much importance though; not only has CHoP banked over $85M in his career, he's also married to the daughter of the 76th wealthiest man in Japan.

On this date four years ago, the Mets locked up franchise cornerstone David Wright to a six-year deal worth $55MM guaranteed. A club option for 2013 could put another $15MM in his pocket, and he's already earned an extra $300K in award based incentives. Wright, just 23 at the time and now a .307/.387/.517 career hitter, would have become a free agent after this season had he not opted for the long-term security. Can't say I blame him.

If you have a suggestion for this feature, Mike can be reached here.

After trading for Kerry Wood on Saturday, the Yankees designated Park for assignment. The 37-year-old right-hander has respectable strikeout (7.4 K/9) and walk (3.1 BB/9) rates, but has allowed seven homers in 35.1 innings of work. Park also allowed 40 hits with the Yankees, so his season ERA sits at 5.60.

Park, 27, pitched to a 5.60 ERA with 7.4 K/9 and 3.1 BB/9 in 35.1 innings of relief sandwiched around a month-long stint on the disabled due to a hamstring issue. After allowing zero homers as a reliever with the Phillies last season, Park allowed seven this year. The Yanks tried unsuccessfully to trade him, and are still on the hook for the $437K left on his contract this year.