The Mets have signed outfielders Corey Patterson and Mike Wilson to minor league deals, according to Matt Eddy of Baseball America (on Twitter).  Patterson is represented by Jim Bronner and Bob Gilhooley, according to the MLBTR Agency Database.

The Brewers signed outfielder Corey Patterson to a minor league contract, Tom Haudricourt of the Milwaukee Journal Sentinel tweets. Patterson, a client of Jim Bronner and Bob Gilhooley, doesn't have an invitation to Major League Spring Training at the moment. 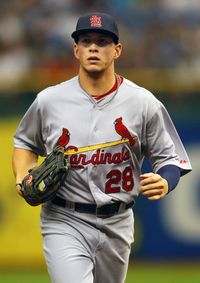 Patterson, 31, hit .269/.315/.406 in 340 plate appearances for the Orioles this year, playing mostly left field.  He came up as a center fielder with the Cubs, who drafted him third overall in 1998.  As Patterson can be a useful fourth outfielder, I thought he might be able to snag a big league contract.  He is represented by Jim Bronner and Bob Gilhooley.  The Jays' current outfield picture includes Travis Snider, Vernon Wells, and Rajai Davis, with Jose Bautista and Adam Lind seemingly more likely to occupy infield corners.

Abreu, 34 in April, spent the 2010 season with Tampa Bay's Triple-A affiliate.  His signing was announced by Baseball America's Matt Eddy earlier this month, but the journeyman deserves elaboration here at MLBTR.  In Triple-A Abreu posted a 2.28 ERA, 13.3 K/9, 3.4 BB/9, and 0.2 HR/9 in 55 1/3 innings.  Abreu has done that type of thing at Triple-A before, but has yet to receive an extended big league trial.

A note about Henn: the Blue Jays originally claimed him off waivers from the Orioles in October of last year, marking GM Alex Anthopoulos' first move.

You might see Ty Wigginton in an Orioles uniform next season, but it’s less likely that the club re-signs Kevin Millwood or Julio Lugo. Orioles president of baseball operations Andy MacPhail told Dan Connolly of the Baltimore Sun that he has preliminary interest in re-signing some of Baltimore’s free agents, though final decisions are months away. Here are the details: