Less than 12 months ago, right-hander Randy Wells announced his retirement from the game of baseball. Now, however, the former Cub is looking to make a comeback, he told David Wilhelm of the Belleville News-Democrat.

The 31-year-old Wells recently threw for a Diamondbacks area scout in St. Louis and is hoping to prove his health to teams with the end goal of securing a minor league deal and an invitation to big league Spring Training. Wells admits that his comeback attempt may be "far-fetched," but renewed health has him looking for a chance regardless:

"I can't expect a whole lot. It's not like people are knocking down my door or anything like that. I quit because of injury. Not a lot of people are going to take a flier on a 31-year-old guy just to bring him into minor-league camp to see if he's healthy."

Wells last appeared in the Majors with the Cubs in 2012, posting a 5.34 ERA in 28 2/3 innings before undergoing arthroscopic surgery on his right elbow. The ACES client inked a minor league deal with the Rangers in the 2012-13 offseason and made five rocky starts for their Triple-A affiliate last season before deciding to hang it up due to his elbow issues.

Allen, 26, never caught on in the Majors and spent the second half of this season in Japan.

A total of 28 players — all with big league time under their belts — recently elected free agency after finishing the year in Triple-A. Here is the full list, courtesy of the International League and Pacific Coast League transaction pages…

The latest outright assignments from around MLB…

The Cubs have designated pitcher Randy Wells for assignment, according to Carrie Muskat of MLB.com (via Twitter).  The club also announced that fellow right-hander Rafael Dolis has been recalled from Triple-A Iowa.

Wells allowed four walks in just three innings against the Mets on Tuesday, leading manager Dale Sveum to hint that he could be bumped from the rotation.  In four starts and eight relief appearances this season, Wells has a 5.34 ERA with 4.4 K/9 and 7.5 BB/9.  The 29-year-old also made six Triple-A starts, posting a 7.71 ERA with 6.5 K/9 and 3.6 BB/9.

END_OF_DOCUMENT_TOKEN_TO_BE_REPLACED

Following Friday's meltdown against the Braves, Carlos Zambrano cleared out his locker and threatened to retire, leading the Cubs to place him on the disqualified list. The union will file a grievance tomorrow, and Buster Olney of ESPN.com (Insider required) writes that the Cubs may be left with a "thin defense" for their decision. Regardless of the outcome though, Olney thinks the team's actions make it clear that they're done with Big Z's antics, and that the right-hander won't be a Cub by next spring. Here's the latest chatter on the situation: 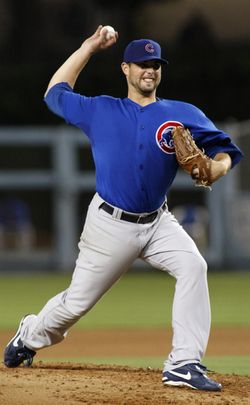 The Cubs' rotation has run into some bad injury luck early this season, with both Andrew Cashner (shoulder) and Randy Wells (forearm) now on the disabled list. The former was a first round pick that spent just one full season in the minors, the latter an unheralded 38th round pick that spent parts of six seasons in the minors before getting to the big leagues. If it wasn't for a transaction that took place three years ago today, one of them wouldn't even be in the organization.

Wells, now 28, was originally drafted as a catcher out of Southwestern Illinois Community College in 2002, but the team moved him to the mound in late 2003 even though he'd never pitched in high school or college. He posted a 4.43 ERA in 107 2/3 innings the next season (Single-A), then was even better in 2005 (2.87 ERA in 106 2/3 IP at Single and Double-A). Baseball America didn't consider him much of a prospect though, and it wasn't until 2007 that Wells got some attention.

In his second crack at Triple-A, Wells made nine starts and 31 relief appearances for the Iowa Cubs in 2007. Although his 4.52 ERA was hardly noteworthy, he did strike out 9.5 men per nine innings. That's what caught the eye of the Blue Jays, who selected Wells with the 11th pick of the 2007 Rule 5 Draft. He made the team out of Spring Training in 2008, though he appeared in just one game with them (scoreless inning with one walk).

Apparently that was all Toronto needed to see. Nine games into the season, the Jays designated Wells for assignment, making room on both the 25-man and 40-man rosters for left-hander Jesse Carlson. After toiling in limbo (and on waivers) for a week, Wells was returned to the Cubs on April 16th as per Rule 5 Draft protocol. He made four relief appearances in Chicago later that year, and has pitched to a 3.67 ERA in 60 starts (365 2/3 innings) in the two years since.

Wells is a true player development success story, a guy that changed positions (more like vocations, really) as a professional and climbed the ladder one step at a time. He was ranked as one of his organization's top 30 prospects just once by Baseball America, when they placed him 22nd in Toronto's system prior to the 2008 season. Wells may be hurt now, but he's done some fine work for the Cubs over the last few years. The only reason they have him around though is because the Blue Jays cut ties with him three years ago today.