Here are the latest minor moves from around the baseball world…

Here are today’s minor moves from around the game.

The Dodgers have designated outfielder James Ramsey for assignment, sent left-hander Julio Urias to Triple-A Oklahoma City and selected the contract of reliever Casey Fien, according to a team announcement.

Ramsey, whom the Dodgers acquired for cash considerations from the Indians last month, has never seen major league action despite going 23rd overall in the 2012 draft. The 26-year-old has slashed just .222/.285/.429 with five home runs in 138 minor league plate appearances this season. All told, Ramsey owns a .257/.350/.421 line in 1,792 minor league trips to the plate.

Urias, meanwhile, made only one start for the Dodgers after his highly touted promotion. The 19-year-old superprospect tossed 2 2/3 innings of three-run ball and allowed nine base runners (five hits, four walks) against three strikeouts in a loss to the Mets on Friday. He previously threw 41 dominant innings with Oklahoma City and has gone 27 consecutive frames in the minors without surrendering a run.

Fien, claimed off waivers from the Twins earlier this month, has racked up 251 1/3 big league innings of 4.05 ERA pitching. The 32-year-old has limited walks (1.82 BB/9) throughout his career, and he exceeded the 60-inning plateau in each season from 2013-15. Fien got off to a forgettable start for the Twins this year, however, and then yielded five earned runs in 7 2/3 innings with Oklahoma City.

Walters has seen bits of big-league action in the past three seasons with the Nationals and Indians, batting .182/.233/.394 while playing various infield positions and the corner outfield. He was in the midst of a strong Triple-A season upon being traded from Washington to Cleveland for Asdrubal Cabrera in 2014 and looked like he might be somewhat of an unconventional power-hitting prospect as an older player who could man several positions, but he hasn’t shown much offensively since the deal. The Indians designated him for assignment last week.

In a separate move, the Indians also designated Ramsey last week, just months after adding him to their 40-man roster to protect him from the Rule 5 Draft. The 26-year-old hit .243/.327/.382 while playing all three outfield positions for Triple-A Columbus last season. Ramsey is a former first-round draft pick and has the distinction of being traded for a big-leaguer (Justin Masterson, in 2014), but he’s never played in the big leagues.

The Indians announced that they have selected the contract of right-hander Joba Chamberlain and designated outfielder James Ramsey for assignment in order to clear a spot on the 40-man roster. Additionally, catcher Roberto Perez has been cleared to play after undergoing concussion tests following a foul tip to the mask on Sunday.

Chamberlain, 30, inked a minor league deal with Cleveland this offseason and earned a spot on the club with a Spring Training that featured mixed results (MLB.com’s Jordan Bastian reported in late March, however, that Chamberlain would make the club). Chamberlain yielded just three runs and struck out eight batters in 10 innings, but he also yielded a troublesome seven walks.

That type of control problem has never been much of a problem for Chamberlain, but the righty has endured his share of struggles over the past few seasons. Chamberlain logged a 4.93 ERA in 2013 in his final season with the Yankees, and after a strong first half in 2014 with the Tigers, he wilted and posted a 4.97 ERA down the stretch. Last year, he began the season with Detroit once again and posted a 4.09 ERA in 22 innings before being designated for assignment and eventually working back to the Majors with Kansas City, where he surrendered five runs in 5 2/3 innings. His Triple-A work wasn’t any better, as Chamberlain surrendered a combined 13 earned runs in 12 Triple-A frames between the Jays (for whom he never appeared in the Majors) and Royals. He’ll look for better results in Cleveland this season.

Ramsey, meanwhile, is a former first-round draft pick — 23rd overall by the Cardinals in 2012. St. Louis traded the outfielder to the Indians in exchange for Justin Masterson at the 2014 trade deadline. Ramsey was impressive in 2014 following the trade, but he batted just .243/.327/.382 in 503 Triple-A plate appearances as a 25-year-old at the Triple-A level last season. Baseball America ranked him as Cleveland’s No. 23 prospect this winter, noting that while he lacks standout tools, he has an intelligent approach that helps the tools he does have to play up. BA, however, noted that Ramsey could ultimately prove to be a fourth outfielder or platoon bat due to struggles against left-handed pitching. MLB.com rated him 27th among Cleveland farmhands, similarly noting that his ability to play all three outfield spots could make him a fourth outfielder.

The DFA of Ramsey comes just four and a half months after the FSU product was added to Cleveland’s 40-man roster to protect him from the Rule 5 Draft. A Spring Training effort that saw Ramsey go just 2-for-21 with 10 strikeouts against one walk certainly couldn’t have helped his chances at remaining on the 40-man roster. He’ll now join 14 other players in DFA limbo, though Cleveland presumably hopes that he’ll clear waivers and remain in the organization.

Tonight at 8:00pm ET is the deadline for teams to add players to their 40-man roster and thereby protect them from this year’s Rule 5 Draft. In other words: there will be a significant amount of 40-man roster moves made over the course of the next 13 or so hours. Six clubs already made moves to protect prospects from the Rule 5 yesterday, and each of the remaining 24 clubs should make moves today as well.

In brief: players drafted/signed at 18 years of age or younger must be added to the 40-man roster within five years of signing or be exposed to the Rule 5 Draft. Players drafted/signed at 19 or older must be added within four years. Those interested in all of the specifics can refer to articles from MLB.com’s Jonathan Mayo and J.J. Cooper of Baseball America. Perhaps of greater interest is that Mayo lists all of the prospects from MLB.com’s Top 100 list and from their organizational Top 30 lists that much be protected in advance of tonight’s deadline, while Cooper provides brief write-ups on each player that has been protected (and will continue to do so as additions are made).

Here are today’s additions to the 40-man roster. You can check out Baseball America’s coverage to learn more about the individual players listed below …

The Cardinals have bolstered their starting rotation depth by acquiring Justin Masterson from the Indians in exchange for top outfield prospect James Ramsey. Both teams have officially announced the deal. Right-hander Michael Wacha has been moved to the 60-day DL to make room on the Cardinals’ 40-man roster. 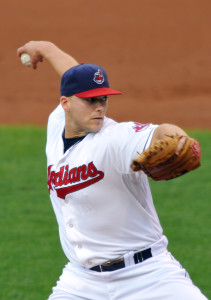 Masterson, 29, is currently on the disabled list (he’s set to be activated this weekend) and in the midst of a down season as he heads into free agency. He’s earning $9.7625MM this season, of which roughly $3.3MM remains.

Masterson’s fastball velocity has declined significantly this season, falling from an average of 91.6 mph in 2013 to 89.1 in 2014. However, Masterson’s now former pitching coach Mickey Callaway said earlier in the month that he felt Masterson’s knee injury had altered his mechanics, which could explain the dip in velocity as well as the increase in walks.

The Cardinals have been on the lookout for rotation help for weeks now, having also been connected to Jake Peavy as well as aces David Price and Jon Lester. Masterson comes with upside, to be sure; FIP, xFIP and SIERA all feel his skill-set should have resulted in an ERA in the low 4.00s this season, and he’s had a good deal of past success. However, his injury and ineffective results will leave some Cardinals fans wondering if he’s truly an upgrade over internal options.

That remains to be seen, but the Cardinals felt that Masterson could bolster their starting  pitching in light of Michael Wacha’s injury and the struggles of Shelby Miller. While Adam Wainwright and Lance Lynn are reliable arms atop the rotation, Joe Kelly has been injured for most of the season, and Carlos Martinez would shatter last season’s innings total were he to remain in the rotation over the final two months (to say nothing of the postseason).

As for the Indians, they’ll receive Ramsey, a 2012 first-round pick that ranked seventh among Cardinals prospects on Baseball America’s midseason list and ranked sixth according to Jim Callis and Jonathan Mayo of MLB.com. The 24-year-old is hitting .300/.389/.527 with 13 homers in 281 Double-A plate appearances this season. Callis and Mayo note that Ramsey has the speed to play center field (though he’s not a huge threat on the bases) and the arm to play right field if a change is needed. He draws a fair amount of walks and has shown more power than some anticipated coming out of college, the MLB.com duo adds.

Peter Gammons first reported that Masterson was headed to St. Louis (on Twitter), and Joel Sherman of the New York Post was the first to report Ramsey’s involvement in the trade (Twitter link).