The Blue Jays have claimed lefty reliever Sam Moll off waivers from the Mariners; both teams’ PR accounts have announced the move.

It’s been a busy year for the 26-year-old Moll, who began last season with the Rockies, end it with the Athletics, and has since been the object of a waiver hot-potato game between Pirates, Mariners and now the Blue Jays. Seattle GM Jerry DiPoto had spoken back in September of plans to convert Moll back to a starter even though he hasn’t pitched in that capacity since his professional debut in 2013. Instead, he’ll join his fourth team of the winter and hope he can earn a shot in Toronto, presumably in the bullpen.

The Athletics gave Moll his first taste of MLB action last season in the form of a September call-up. He make 11 appearances with the club, although he recorded one or no outs in six of them. Moll ended the season having allowed eight earned runs in 6 2/3 innings, though he did manage to strike out seven hitters. There’s some upside for Moll. He throws a fastball in the mid-nineties, which he mixes with a slider.

After being selected in the third round of the 2013 draft by the Rockies, Moll rose steadily through the minor league ranks. He managed to exceed a 50% ground ball rate in two consecutive seasons with Colorado’s Triple-A affiliate before the Athletics acquired him in August of 2017 for cash considerations.

The Mariners feel they need to bolster their rotation and are likely to increase their efforts to add a starter on the trade and free-agent markets if they miss out on right-hander Shohei Ohtani, Bob Dutton reports (Twitter links). If the Mariners are successful in luring Ohtani to Seattle, however, they’ll likely focus more on beefing up the bullpen and adding an outfielder to the mix. Certainly, the Mariners are doing everything in their power to be able to make the best offer possible to Ohtani, as they’ve now traded prospects Thyago Vieira (to the White Sox) and David Banuelos (to the Twins) to add an additional $1.5MM worth of international bonus allotments.

A few more notes out of Seattle…

The Mariners announced that they’ve claimed left-handed reliever Sam Moll off waivers from the Pirates, bringing their 40-man roster to a total of 37 players.

Pittsburgh had only just claimed the 25-year-old Moll off waivers from the A’s on Monday, but the Bucs apparently did so with the hope of then passing Moll through waivers themselves in order to keep him in the organization without committing a 40-man roster spot.

A former third-round pick of the Rockies, Moll made his big league debut in 2017, though he was tagged for eight earned runs in a small sample of 6 2/3 innings. His work in the minors, however, is more solid. In 54 1/3 innings between the Triple-A affiliates for the Rockies and the A’s, Moll pitched to a 3.64 ERA with 7.8 K/9 against 3.1 BB/9.

Moll has a history of missing bats and inducing grounders at an above-average rate through the Double-A level and will give Seattle a lefty with multiple minor league options remaining to compete for a bullpen spot next spring — assuming he makes it to camp with the Mariners and doesn’t land with another organization via waivers, of course.

The Pirates have claimed left-hander Sam Moll off waivers from the Athletics, according to press releases from both teams. Pittsburgh’s 40-man roster is now at 39 players.

Moll, 25, is a former third-round pick of the Rockies that was traded to Oakland this past August for cash considerations. The A’s designated him for assignment last week when clearing space on their 40-man roster to protect several players from the Rule 5 Draft.

The 2017 season saw Moll make his big league debut in Oakland, though the results weren’t especially pretty. In 6 2/3 frames, the Memphis product was tagged for eight runs on 13 hits (including two homers) and three walks with seven strikeouts.

In 54 1/3 innings between the Triple-A affiliates for the Rockies and the A’s, Moll pitched to a more respectable 3.64 ERA with 7.8 K/9 against 3.1 BB/9. He also registered a promising 50.3 percent ground-ball rate in his 47 1/3 innings with Colorado’s Triple-A affiliate, though that fell to 33.3 percent in admittedly tiny seven-inning sample with Oakland’s affiliate. Overall, Moll has a history of missing bats and inducing grounders at decent clips in the minors. He joins Nik Turley as the second southpaw claimed off waivers by the Bucs since the offseason began.

Moll got a look in the majors after a mid-season claim from the Rockies organization. While he recorded seven strikeouts in his six innings, the 25-year-old was also touched for eight earned runs on 13 hits. In his 54 1/3 Triple-A innings on the year, Moll worked to a 3.64 ERA with 7.8 K/9 and 3.1 BB/9.

The Athletics have acquired lefty Sam Moll from the Rockies, per an announcement from the Colorado organization. Cash considerations or a player to be named later will make up the return for Moll, who had been designated for assignment recently.

Those numbers don’t tell the full story on Moll, who was generally regarded as one of the organization’s top thirty or better prospects entering the season. He brings mid-nineties heat from the left side with a slider and even a change that can be effective at times. 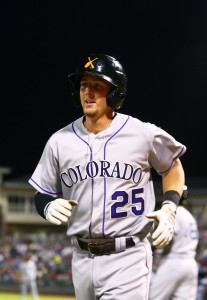