March 23: The Red Sox have formally announced the signing of Story to a six-year contract.

March 20: The Red Sox are in agreement with Trevor Story on a six year, $140MM contract. After the fourth year, 2025, Story can opt out of the final two years of the deal. However, Boston can negate that opt-out by picking up a seventh year option for $25MM, or pay a $5MM buyout. If they were to exercise that option, it would add $20MM to the deal, effectively making it a seven-year, $160MM arrangement. Story will not have any no-trade protection as part of the contract. Story is a client of Excel Sports Management.

Story will take over at second base with Xander Bogaerts staying on as the team’s shortstop, per Jim Bowden of The Athletic. Red Sox manager Alex Cora has confirmed that plan, per Marly Rivera of ESPN.

It had been a fairly quiet offseason for the Red Sox up to this point, with the club mostly focused on its pitching staff, adding veterans like Rich Hill, Michael Wacha and Jake Diekman. On the position player side of things, they had only really subtracted since the offseason began, sending Hunter Renfroe to the Brewers for Jackie Bradley Jr. and prospects. Story, however, they have certainly add a tremendous impact bat to their lineup.

After the departure of Troy Tulowitzki, Story took over the everyday shortstop job in Colorado and ran with it. Over the past six seasons, he has played in 745 games and hit 158 home runs, hitting an overall .272/.340/.523, for a wRC+ of 112. He also stole 100 bases and provided excellent defense, accruing 21.6 fWAR in that time.

In addition to helping out the Red Sox this year, the addition of Story makes sense from a long-term view. Xander Bogaerts can opt out of the remainder of his contract at the end of this season, when he will have three years and $60MM left on it, something he seems likely to do. If that should come to pass, they could already have his replacement on the roster. As noted above, the plan for this season is to keep Bogaerts at short and have Story play second, moving Enrique Hernandez to regular outfield duty. Story missed some of last year’s season with an injury to his throwing elbow, and some scouts expressed the belief that he would be best utilized at second base due to that injury impacting his throwing arm. Boston will now have at least one year to see if Story’s arm can rebound in any way before deciding how to proceed beyond 2022. 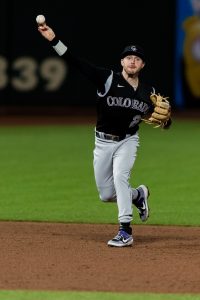 Although the writing has seemed to be on the wall for quite some time now, this officially ends the Trevor Story era in Colorado. Much like with Nolan Arenado before him, there seemed to be a falling out between the club and their marquee player. Last year, as Story was headed into free agency and the club not in contention, he seemed like an obvious candidate to be traded to a contender. However, the deadline came and went without a deal coming to fruition, something that left Story confused. “I don’t have really anything good to say about the situation and how it unfolded,” Story said in the immediate aftermath of the deadline. During the offseason, there didn’t seem to be any belief that a reunion was in the cards. The club apparently offered him more than the $140MM he got from the Red Sox, with Story preferring his chances of competing in Boston, per Jon Heyman of MLB Network. Between Story and Tulowitzki, the shortstop position in Colorado has been spoken for since 2006. For now, it seems like Jose Iglesias will be taking over, as he signed with the club a week ago. Since the club made a qualifying offer that Story rejected, they will receive a compensatory draft pick after the first round. The Red Sox forfeit their second-highest pick and and will have their international signing bonus pool reduced by $500K.

This deal also closes the book on this year’s mega class of free agent shortstops, which featured Story, Carlos Correa, Corey Seager, Javier Baez and Marcus Semien. Going into the offseason, it was expected by many that the Yankees would be prominent players in this market, given their penchant for high payrolls and obvious need at the position that has been apparent since Gleyber Torres was moved to second base last year. But reports emerged in November that they were considering sitting out the shortstop bidding, content to acquire a stopgap solution as they wait for either of Oswald Peraza or Anthony Volpe to graduate from prospects to big leaguers. That now seems to have been the case, as the club acquired glove-first shortstop Isiah Kiner-Falefa to man the position, while the big five shortstops all landed with surprising suitors. The rebuilding Rangers grabbed both Seager and Semien, while another rebuilding club, the Tigers, nabbed Baez. Correa shockingly lingered on the market before settling on a short-term deal with the Twins, a team not known for reeling in the top fish in free agency. Now Story has come off the board, landing on a team that didn’t have an obvious fit at the position.

Since Chaim Bloom left the small-market Rays and took over as Boston’s Chief Baseball Officer after the 2019 season, the club has been undergoing a sort of semi-rebuild process. It was a few months into his tenure that they traded Mookie Betts and David Price to the Dodgers as part of a process to strip down payroll, despite winning the World Series in 2018. On the heels of that trade, the club went 24-36 in the pandemic-shortened season, slipping beneath the lowly Orioles and into last place in the AL East. After some modest additions to the club, many went into 2021 expecting they would be unable to compete in such a strong division. However, they rallied for a 92-win season, just edging out the Blue Jays for a Wild Card berth, making it as far as the ALCS before falling to the Astros. On the heels of that surprise campaign, it seemed for the past few months that the club might again opt for only modest upgrades. Instead, the Fenway Faithful have the big splash that they were desperately hoping for, easily the biggest since Bloom took over, as the AL East figures to be a four-headed beast yet again.