The Angels have signed outfielder Chris Young to a one-year, major league contract, Jeff Fletcher of the Orange County Register reports (Twitter links). The deal comes with a $2MM base salary plus incentives for the CAA Sports client.

The 34-year-old Young brings experience at all three outfield spots and has been a plus defender in his career (19 Defensive Runs Saved, 8.5 Ultimate Zone Rating). He hasn’t seen much action lately in center field, though, and that’ll be the case again this year if Mike Trout stays healthy. Playing time could be hard to come by in the corners, too, given that the Angels also feature established starters in left field (Justin Upton) and right field (Kole Calhoun). Young logged 363 innings in the corners with the Red Sox in 2017 and accounted for minus-4 DRS and a minus-3.4 UZR.

Young is known more for his work on the offensive side, where he has produced a .237/.316/.430 line with 185 home runs and 140 stolen bases across 5,188 plate appearances with several teams. Given that the righty-swinging Young has become a southpaw-hitting platoon player as his career has progressed, the former 30-home run hasn’t racked up great counting stats in recent years. However, he tends to make his playing time count, evidenced by a .262/.361/.466 slash in 1,366 PAs versus left-handers. Young was uncharacteristically poor against lefties last year, though, en route to a .235/.322/.387 overall line and a minus-0.2 fWAR in 276 trips to the plate.

The Angels are obviously betting on a bounce-back showing from Young, who was a terrific bench option for the Yankees in 2015 and the Red Sox in ’16. If he returns to his lefty-mashing ways in 2018, it’d be a boon for an Angels offense that scuffled versus southpaws last season (.240/.332/.356).

Here’s the latest from around baseball…

While there have yet to be any firm indications that the Yankees will shop Andrew Miller and Aroldis Chapman this summer, ESPN’s Buster Olney writes that some executives from other clubs are becoming more and more convinced that the Yankees will indeed hold a “two-tiered auction” on their imposing lefties. In Miller’s case, the belief is that the Yankees will name a specific price for interested organizations (e.g. Kyle Schwarber from the Cubs) and tell the teams to take it or leave it. Chapman’s status as a free agent at season’s end gives him a lower price tag, Olney notes. He goes on to list the Nationals, Dodgers, Rangers, Cubs and Red Sox as teams with potential interest in late-inning bullpen help, though I personally have a tough time envisioning the Sox and Yankees connecting for a trade of that magnitude.

Young will earn $6.5MM in each year of the deal, Alex Speier of the Boston Globe adds on Twitter.

12:29pm: The Red Sox and outfielder Chris Young are in agreement on a multi-year contract, pending a physical, reports Ken Rosenthal of FOX Sports (Twitter link). Young is represented by CAA Sports. 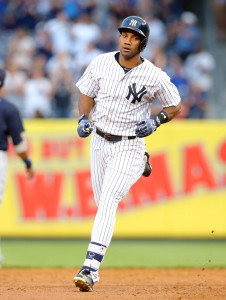 The 32-year-old Young has significantly rebuilt his stock after a dismal showing with the 2014 Mets in which he failed to live up to the club’s one-year, $7.25MM free-agent investment. Young latched on with the Yankees late that offseason and posted an impressive .282/.354/.521 batting line in 79 plate appearances. That showing led to a one-year, $2.5MM contract to return to the Bronx, and Young exceeded expectations on that deal by a fair margin.

In 2015, Young batted a healthy .252/.320/.453 in 356 trips to the plate spread across 140 contests for the Yankees. Young possesses decent pop against right-handed pitching but nearly all of his production comes against lefties at this point. Last season, he logged 175 plate appearances when holding the platoon advantage and batted an incredible .327/.397/.575 with seven home runs. As such, he figures to be held to primarily a platoon role in Boston, though he clearly can deliver a good amount of value at the plate in said capacity.

While Young was at one time to be considered a sound defender in center field, he’s more or less limited to the corners now. He can handle center in a pinch — the Yankees gave him 90 innings there in 2015 –but the Red Sox have multiple options on the roster that project as better defenders in center. In fact, all three of the Sox’ projected starters — Mookie Betts, Rusney Castillo and Jackie Bradley — are capable of handling center (with Bradley likely to see much of the center-field action next season). Bradley is the only left-handed hitter of the bunch, so Young could slot into the lineup in his place against southpaws, with Betts sliding over to center field on those days.

Young is essentially a dead-pull hitter, which should mesh just fine with the Green Monster at Fenway Park. His signing gives the Red Sox a fourth outfield option and also lessens the potential blow if the Sox are to indeed trade one of Bradley or Castillo, as some have speculated. (The notion of a Betts trade teeters on the brink of unfathomable at this point.) In the event of a trade, the Sox could then pursue free-agent (or trade) upgrades in the outfield or simply platoon Young with the left-handed-hiting Brock Holt, who has more than his fair share of outfield experience.

Boston’s 40-man roster is full at this juncture, so the Sox will have to make a move in order to accommodate Young if and when he passes his physical exam to make the deal official.

Fangraphs’ Tony Blengino examines Marco Estrada’s curious skill set, pointing out that metrics such as FIP don’t give the soft-tossing righty full credit for his unrivaled ability to limit line-drives. Additionally, hitters league-wide do less damage on fly-balls hit off pitches thrown between 75 and 94 mph, Blengino notes, so Estrada’s lower velocity and extreme fly-ball tendencies actually work reasonably well together. With a lack of line-drives, more weak contact than average on grounders and limited damage on his glut of fly-balls, Estrada could be a huge bargain this winter if he can he had on a two- or three-year deal worth $8MM or so per year, Blengino writes. Blengino notes that Estrada “lives on the head of a pin,” and even minor changes in his arsenal could be significant detriments, but with a relatively minimal price tag, he concludes that Estrada is worth the risk in the aforementioned price range.

Outfielder Chris Young (not to be confused with the right-handed pitcher of the same name) has changed agencies and is once again a client of CAA Sports, according to Jon Heyman of CBS Sports (Twitter link).

By adding Young to their ranks, CAA will pick up a free-agent-to-be that is presently in the midst of a strong comeback season in the Bronx. Young was a flop with the Mets in 2014 after signing a one-year, $7.25MM free agent contract, but he signed a minor league deal with the Yankees after being released and re-signed with the Bombers this past offseason.

The Yankees deserve some praise for their faith in Young, as he’s rewarded their confidence with a combined .254/.320/.467 batting line in 406 plate appearances between the 2014 and 2015 seasons. Young, of course, has been heavily platooned, as his deficiencies versus right-handed pitching are well documented. He’s been forced into action against right-handed pitching more than the Yankees would like in 2015, receiving 185 total PAs and slashing just .185/.241/.346. Clearly, he still possesses a bit of pop versus righties (.161 ISO), but the bulk of his damage has come versus lefties. Young has tattooed opposing southpaws, batting .323/.393/.586 in 151 plate appearances this year.

Defensively speaking, the 32-year-old Young may no longer be equipped to handle center field with any sort of regularity, but he’s capable of playing there in a pinch at the very least and can still handle a corner spot. He’s swiped three bases this season and received positive grades for his baserunning, per Fangraphs, giving him additional value.

All told, Young won’t necessarily be the most exciting free agent, but he has plenty of desirable traits and shouldn’t come with a prohibitive price tag this offseason — the most lucrative deals for fourth outfielders in recent years have been the respective $10MM and $10.75MM two-year deals for Rajai Davis and Nate McLouth — so interest should be fairly widespread. He’ll add to an already sizable crop of free agents for his new representatives, as CAA also has Mark Buehrle, David Freese, Denard Span and Matt Belisle, among others, set to hit the open market this offseason.

Young’s change in representation will be reflected in the MLBTR Agency Database, which has information on more than 2,000 Major League and Minor League players. If you see any notable inaccuracies or omissions, please let us know via email: mlbtrdatabase@gmail.com.

Here are some of the hot stove-related highlights from Yankees GM Brian Cashman’s chat with reporters (including ESPN New York’s Wallace Matthews and MLB.com’s Barry M. Bloom) on Monday…

In his latest Insider-only piece for ESPN, Buster Olney expressed doubt that the Orioles would re-sign Nelson Cruz this winter.  The O’s are more likely to let Cruz go and pick up an extra draft pick (via the qualifying offer) since Cruz’s big season may have made him too expensive for Baltimore.  If the team looks for a right-handed bat to replace Cruz, Olney opines that the Braves’ Evan Gattis, rumored to be a trade candidate, would be a perfect fit as the Orioles’ new designated hitter.

Here’s some more from around the AL East…

The Yankees have agreed to terms with outfielder Chris Young on a minor league contract, reports Jon Heyman of CBS Sports (on Twitter). 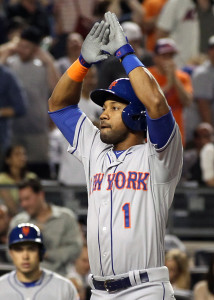 Young, a client of Reynolds Sports Management, began the season with New York’s other team after signing a one-year, $7.25MM contract in the offseason. The Mets were looking to buy low on a player that averaged 3.7 wins above replacement from 2010-12 before a down season in 2013, but unfortunately for all parties involved, Young’s struggles continued.

The former Diamondback batted just .205/.283/.346 in 287 plate appearances with the Mets before being designated for assignment and ultimately released earlier this month. Young, 30, can provide the injury-plagued Yankees with some additional outfield depth should he be added to the 40-man roster in advance of Sept. 1, when Major League rosters will expand.

With Brett Gardner and Jacoby Ellsbury locked into left and center field, respectively, Young could potentially join a right field mix that includes Ichiro Suzuki, Martin Prado, Zelous Wheeler and Carlos Beltran if added to the roster. He can also handle either of the other two outfield spots in the event of a day off or an injury for Ellsbury or Gardner, which could be significant, as Gardner has dealt with a right ankle injury over the past few days.