The Phillies announced this evening they’ve hired former NL MVP Jimmy Rollins as a special advisor to president of baseball operations Dave Dombrowski. According to the team, Rollins will “periodically assist the major league club in an on-field capacity and advise the front office with baseball operations decisions.” He will also continue to broadcast some of the team’s games as an analyst for NBC Sports Philadelphia.

“The addition of Jimmy Rollins to our baseball operations department is a significant gain for the Phillies,” Dombrowski said in the team’s press release announcing the move. “As one of the franchise’s all-time greats, Jimmy brings tremendous baseball instincts and an institutional knowledge of what it takes to win in Philadelphia. We look forward to his continued contributions to the Phillies.”

The 43-year-old Rollins released a statement of his own, saying he’s “honored to move into baseball operations and assist Dave and his staff. The Phillies mean a great deal to me, and I’ll do whatever I can to help get this team back to where it belongs, and that’s deep in October.”

Rollins, of course, is one of the best players in franchise history. He spent 15 seasons of a 17-year big league career in Philadelphia, donning a Phils uniform from 2000-14. During that run, the switch-hitting shortstop blossomed into one of the sport’s best players. He finished in third place in NL Rookie of the Year balloting in 2001, earning his first of three All-Star selections that season and leading the Senior Circuit with 46 stolen bases.

The Oakland native earned some down-ballot MVP support during his debut season, one of five years in which he’d garner votes. The pinnacle came in 2007, when Rollins was elected MVP after putting up a .296/.344/.531 line with 30 homers and a Gold Glove award for his defense. That season kicked off a string of five straight postseason appearances for the Phillies, highlighted by a 2008 campaign in which they vanquished the Rays in a five-game World Series.

As Rollins implied, it has been a while since the Phils have gotten back to those heights. That streak of consecutive playoff appearances was snapped in 2012, kicking off a ten-year postseason drought the team is hoping to snap in 2022.

The Phillies announced today that former infielder Jimmy Rollins has joined the organization as a special advisor. He’ll return to the team that drafted him back in 1996 and with which he spent 15 of his 17 seasons in the majors.

Rollins, 40, has not formally announced an end to his playing career, though it had long seemed clear that he had hung up his spikes. He last played in 2016 and was already slated to participate in a retirement ceremony with the Philadelphia organization during the upcoming season.

Whether Rollins will ultimately launch a full-blown post-playing career in the game isn’t yet clear. For now, he’ll get started with a fairly typical slate of potential activities for a respected former star. Per the club, he will engaged in “spring training coaching, meeting with sponsors and suite holders, fan engagement and community outreach,” among other possible functions.

Longtime major league shortstop Jimmy Rollins hasn’t officially wrapped up his playing career since the Giants released him in March 2017, but it seems the 39-year-old is heading in that direction. Rollins will soon meet with Phillies general manager Matt Klentak to discuss a potential role, according to Matt Breen of the Philadelphia Inquirer. Rollins would like to retire as a Phillie, and while he isn’t interested in coaching, “he could work on assisting some players or on special assignments,” Breen writes. Rollins is best known for his run with the Phillies from 2000-14, a period in which he established himself as one of the greatest players in franchise history.

More from the National League…

The Giants have released veteran shortstop Jimmy Rollins, according to Alex Pavlovic of NBC Sports Bay Area (Twitter link). The decision was reached after the organization consulted with the veteran, who had already been told he would not make the Opening Day roster.

It’s not clear what’ll be next for the 38-year-old, who struggled at the plate during camp. He will “take a little time” to weigh whether to continue playing, per Bob Nightengale of USA Today (Twitter link).

Rollins, a 17-year MLB veteran, had already posted two straight seasons with middling offensive production, and wasn’t able to find a home last year after being released in mid-season by the White Sox. That said, perhaps another organization will end up with a need at an opportune moment. Rollins would surely represent a respect veteran addition to any roster, having compiled over 10,000 career plate appearances and 49 fWAR/46 rWAR since he first cracked the bigs way back in 2000.

The Giants have informed 38-year-old shortstop Jimmy Rollins that he won’t make their roster, Andrew Baggarly of the East Bay Times was among those to report. San Francisco is now awaiting word on whether the longtime Phillie and 2007 NL MVP will accept a minor league assignment, per manager Bruce Bochy, but Baggarly notes that Rollins has a Thursday opt-out in his contract. This could conceivably be the end of the line for Rollins, who posted subpar seasons with the Dodgers and White Sox over the past two years. Chicago released him last June after a 41-game stint on the South Side, and he went on to ink a minors pact with the Giants in December.

More from the West divisions:

Here’s the latest from the NL West…

Some rumblings from around the NL West…

The Giants and shortstop Jimmy Rollins are in agreement on a minor league contract with an invite to big league Spring Training, reports Ken Rosenthal of FOX Sports (Twitter links). FanRag’s Jon Heyman tweets that Rollins’ contract comes with a $1MM base salary if he reaches the Major Leagues.

The 38-year-old Rollins is, of course, a franchise icon in Philadelphia, where he spent parts of 15 seasons and won the 2007 National League MVP (among many other accolades). At this stage of his career, however, Rollins is simply looking to make a Major League roster and contribute in a reserve capacity. San Francisco’s middle infield includes Brandon Crawford and Joe Panik, while Brandon Belt and Eduardo Nunez figure to shoulder the load at the infield corners. Rollins is a Bay Area native, though, so the idea of playing for the Giants even in a limited role likely carries some added appeal. He’ll try to beat out Kelby Tomlinson and Ehire Adrianza for a bench spot this spring.

Rollins opened the 2016 season with the White Sox and served as Chicago’s primary shortstop early in the year, but his bat didn’t bounce back from a rough 2015 campaign with the Dodgers. In 166 plate appearances with the White Sox last year, Rollins batted .221/.295/.329 with a pair of homers and five stolen bases. That lack of production ultimately led the White Sox to entrust the shortstop position to top prospect Tim Anderson, who turned in a solid rookie effort and positioned himself as Chicago’s long-term option moving forward.

JUNE 10: The White Sox announced today that they have promoted top shortstop prospect Tim Anderson to the Majors and designated struggling veteran Jimmy Rollins for assignment in order to clear space on the roster. Anderson entered the season rated as the game’s No. 42 prospect in the eyes of Jim Callis and Jonathan Mayo of MLB.com, and he rated 45th on the Top 100 prospect lists penned by Baseball America and Keith Law of ESPN.com. 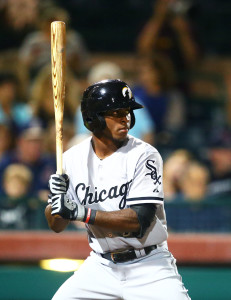 Anderson, a first-round pick of the White Sox in 2013 (No. 17 overall), is batting .304/.325/.409 with four homers and 11 steals through his first 55 games at the Triple-A level this season. He’ll presumably get a chance to replace Rollins as the team’s everyday shortstop, with defensive standout Tyler Saladino representing a fallback option in the event that Anderson is overmatched by Major League pitching.

The scouting reports on Anderson offer mixed reviews on his work at shortstop, with MLB.com noting that he has plenty of arm strength but lacks soft hands and has erratic footwork. His tools profile in center field if he can’t handle short, per MLB.com, though BA and Law are a bit more optimistic on his chances to stick at short. BA notes that he has a penchant for highlight-reel plays but sometimes doesn’t play the right hop and doesn’t consistently make good throws from the hole. Law notes that he made improvements in his actions at shortstop in 2015 as well. What all of the reports do agree on is that Anderson is a plus-plus runner with the contact skills to hit between .280 and .300 in the Majors even if it comes with a pedestrian on-base percentage. However, as Dan Hayes of CSN Chicago points out (on Twitter), Anderson has cut his strikeout rate dramatically as his first Triple-A season has worn on; the 23-year-old whiffed 29 times in his first 103 PAs with Charlotte (28.1 percent), but it took him another 158 PAs to punch out another 29 times (18.8 percent).

By delaying his promotion until June 10, the White Sox have almost certainly prevented Anderson from reaching Super Two designation, which would allow him to be arbitration eligible four times instead of three. The largest amount of service time he could accrue at this stage of the season would be 114 days, and the lowest Super Two cutoff in recent years has been two years, 122 days (in both 2013 and 2010). If he’s in the Majors for good, Anderson would project to be eligible for free agency following the 2022 season and would not be eligible for arbitration until the completion of the 2019 campaign. 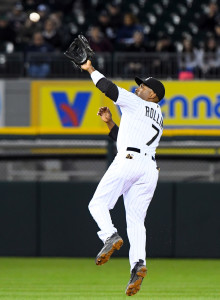 Rollins, 37, is of course a Phillies icon due to his storied and excellent career with Philadelphia, where he batted .267/.327/.424 across parts of 15 Major League seasons. With the Phils, Rollins was a three-time All-Star, a four-time Gold Glover and the 2007 National League MVP in a season that saw him bat .296/.344/.531 with 30 homers and 41 stolen bases. (He won a Silver Slugger that season as well.) However, since being traded to the Dodgers prior to the 2015 campaign (Philadelphia picked up right-hander Zach Eflin and lefty Tom Windle in the swap), Rollins’ offensive numbers have flatlined. He batted a mere .224/.285/.358 in his lone season wearing Dodger Blue, and his production with the South Siders hasn’t been any better. He’s produced a sub-par .221/.295/.329 slash in 166 trips to the plate this season.