Ketel Marte is likely ticketed for heavy usage in centerfield this season, per Nick Piecoro of the Arizona Republic. The Diamondbacks stated preference for Marte is twofold: they’d like to return him to the infield, and they’d like not to bounce him between positions (in 2019, Marte appeared in 96 games in center, 83 at second, and 11 at shortstop). But unless they make a move on the trade market, GM Mike Hazen is unlikely to satisfy both criteria.  They could have their cake and eat it too by trading for the Pirates’ star centerfielder of the same surname. Speculatively speaking, Starling Marte and Jackie Bradley Jr. are both available, and there aren’t many options beyond those two to upgrade in center. A year after picking 8 times in the first 100 selections of the 2019 draft, the Diamondbacks have the prospect capital to make such a move if they want to cash in. If not…

The Swihart addition hasn’t worked out for the Diamondbacks, who acquired the former highly touted catcher from the Red Sox back in April. The 27-year-old didn’t get a great chance to establish himself as a backstop in Boston, and the same has been true in Arizona. Swihart hasn’t started a single game behind the plate as a member of the Diamondbacks, with whom he has batted a meager .136/.186/.273 in 70 plate appearances. Overall, the 2011 first-round pick is just a .243/.301/.355 hitter over 696 major league PA.

The 25-year-old Rojas is an Arizona native who’s coming up just under two weeks after he joined the team in its trade with Houston for right-handed star Zack Greinke. Rojas, who now ranks as the Diamondbacks’ 29th overall prospect at MLB.com, has slashed an outstanding .332/.418/.606 with 23 home runs and 33 steals (43 attempts) in 479 PA at the Triple-A level this season. 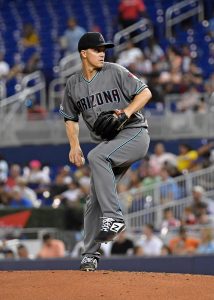 The buzzer-beating trade transforms an already-imposing Astros one-two rotation punch to a genuine postseason powerhouse. The 2019 Greinke trade harkens back to 2017’s acquisition of Justin Verlander for the Astros, and Greinke will now join Verlander and Gerrit Cole as the most formidable 1-2-3 combination in the American League (if not all of baseball).

Greinke is earning $31.5MM in 2019 and is still owed another $10.5MM of that salary between now and season’s end. He’s also under contract in both 2020 and 2021, with a $32MM salary owed to him in each season. Beyond that, he still has multiple payouts on his prorated signing bonus coming his way — $3MM in 2020 and 2021 — and receives a $2MM signing bonus by virtue of being traded. A third of his salary in 2019-21 is deferred and will be paid out in annual payment of $12.5MM from 2022-26, thus reducing at least some of the immediate financial implications for Houston. The Astros are reportedly “only” on the hook for about $53MM of the money that is still owed to Greinke.

Greinke’s six-year, $206.5MM contract with the Diamondbacks, signed in the 2015-16 offseason, set a then-record for the largest average annual salary ever promised to a player. And while the first season of that deal looked to be an ominous step backward from the former Cy Young winner’s Hall of Fame trajectory, he’s righted the ship and then some in the ensuing two and a half seasons.

The acquisition of Greinke is all the more vital for the Astros when glancing at their future outlook. Cole is slated to become a free agent at season’s end, as are left-hander Wade Miley and right-hander Collin McHugh. That’s three rotation options all departing, and with Martin undergoing Tommy John surgery and Whitley struggling, the most big-league-ready of Houston’s farmhands suddenly looked less certain to be 2020 contributors. (Whitley certainly still could be, of course.) The organization hopes to have Lance McCullers Jr. back from Tommy John surgery next season, but an immediate return to form is far from a sure thing.

Now, with Greinke and fellow controllable acquisition Aaron Sanchez joining the team, the Astros have a pair of new arms to team with Verlander and whichever internal options are up to the task. (Sanchez, alternatively, could also work out of the bullpen.) Landing Greinke lessens the organization’s urgency to pay top dollar for Cole on the open market as well; Cole himself seems likely to pursue a $200MM+ contract in free agency and seems a good bet to secure $150MM+ even if he doesn’t quite reach that level of rarefied air.

Turning to the Diamondbacks, who entered deadline day with a .500 record and an insurmountable division deficit, the move is the next step toward ushering in a new era of baseball. The D-backs traded face of the franchise Paul Goldschmidt this offseason, landing promising young players Carson Kelly and Luke Weaver as the key pieces in that deal. Now, third-year GM Mike Hazen and his staff have shipped out the team’s ace and cleared a substantial amount of payroll, acquiring a pair of pitchers who entered the season regarded as top 100 prospects in all of baseball: Martin and Bukauskas.

Martin won’t be a factor until late 2020 after undergoing Tommy John surgery, but he’s viewed as a potential midrotation arm with an above-average fastball and an above-average, potentially plus slider. He averaged 95.3 mph on his heater in his brief MLB time this season and posted a 3.13 ERA with nearly 11 punchouts per nine innings pitched in 37 1/3 Triple-A frames before undergoing surgery. 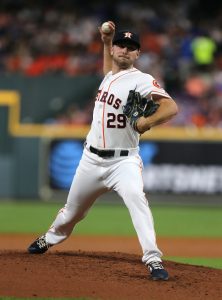 Because his injury and the subsequent operation came about when he was pitching in Triple-A, Martin is on the minor league injured list and not accruing MLB service time. That’s key for Arizona because it means they quite likely won’t need to have him on the MLB roster or injured list until late 2020, which would theoretically make him controllable through the 2026 season. If the D-backs decide they need a roster spot and promote him to the MLB 60-day IL, that timeline would be subject to change.

Bukauskas, 22,was the 15th overall pick in the 2017 draft and has spent the 2019 season in Double-A. While his 5.25 ERA isn’t particularly impressive, he’s averaged 10.3 K/9 with a solid 47.1 percent ground-ball rate against older, more advanced competition at that level. Over at Fangraphs, Kiley McDaniel and Eric Longenhagen gave Bukauskas the potential for three 60-or-better offerings (on the 20-80 scale) but indicated in their preseason report that durability concerns — he has some back issues stemming from a previous car accident — and command could limit his workload and realization of his considerable ceiling.

Beer, beyond the superlative fun that can be had with his name, is the other big get for the Diamondbacks. Houston’s pick at No. 28 overall in 2018, Beer receives 65 to 70 grades on his raw power in scouting reports and makes more contact than one might expect from a prototypical slugger. He’s ripped through Double-A pitching in 2019, hitting at a .299/.407/.543 clip with 16 home runs and nine doubles. He’s also walked at an 8.6 percent clip against a 20.7 percent strikeout rate. Beer has bottom-of-the-scale speed but could be a bat-first option for Arizona at first base (or at designated hitter if it’s ever implemented in the National League — a possibility that continues to be a point of discussion).

Rojas is 25 years old and isn’t regarded as a top prospect, but he’s played all four infield slots and both outfield corners while tearing the cover off the ball in Double-A and Triple-A this season. He’s a potential near-term option for the D-backs who hit .322/.405/.561 in 195 Double-A plate appearances before graduating to Triple-A and raking at a comparable .310/.402/.586 clip. Rojas has a combined 20 home runs and 32 stolen bases this season. He may never have graced top prospect rankings in the past, but at a certain point that level of performance in the upper minors is difficult to overlook. At the very least, he’s an interesting fourth piece who could emerge as a utility option for the Snakes in the not-too-distant future.