We took a look last week at some of the minor league pacts that have paid the most dividends, focusing in on position players in both leagues. Unsurprisingly, given the lack of offense throughout baseball as a whole at the moment, there are even more success stories on the pitching side of the coin. Some of these are products of small sample size, particularly for the many relievers on the list, but at least for our initial check-in on this subject, the early returns have been strong.

As with the position players, some of these strong starts will fade. There are a few at the back of the list that look particularly difficult to sustain, but there also look to be some genuine bargains unearthed among this group. Some will likely result in trades (Kennedy), but it’d make for a fun story to follow should any of the controllable arms (e.g. Bender, Crismatt) ultimately emerge as long-term pieces for the clubs who gave them their best career opportunities to date.

The Rockies are planning to reinstate Antonio Senzatela from the injured list, manager Bud Black told reporters (including Thomas Harding of MLB.com) yesterday. The righty will start this evening’s game against the Padres.

Senzatela went on the IL May 1 with a right groin strain, so he’ll return after spending the minimum ten days on the shelf. He has managed only a 5.76 ERA/4.67 SIERA over his first six starts. The 26-year-old throws a lot of strikes and induces plenty of ground balls, but he’s one of the league’s worst at missing bats. Senzatela’s 13.1% strikeout rate ranks 131st out of 136 starters with at least 20 innings pitched this season.

Black also provided updates on a handful of other health situations involving the club (via Harding). Lefty Kyle Freeland, a longtime rotation fixture, hasn’t pitched this season after suffering a shoulder strain in March. He’s scheduled to throw four exhibition innings at the team’s Spring Training facility in Arizona this week, but a timeline for his return to the majors is still unclear. Infielder Brendan Rodgers will join Freeland in Scottsdale as he rehabs from a left hamstring strain. Colorado’s presumptive regular second baseman, Rodgers has also yet to make his regular season debut after going down in March.

First baseman C.J. Cron has missed the past three games because of lower back soreness. Black told Harding the club is still evaluating whether he’ll need a stint on the injured list. Signed to a minor-league deal over the winter, Cron has emerged as the Rockies’ most productive hitter in the early going. He’s off to a .290/.394/.495 start with five homers over 109 plate appearances. As a low-cost impending free agent on a 12-22 team, Cron will be one of the sport’s most obvious summer trade candidates if he continues to mash. The Rockies have turned to Matt Adams and Connor Joe with Cron unavailable the past few days.

A few health updates from around the game…

Brusdar Graterol’s placement on the 60-day injured list was either a procedural move or incorrect, depending on who you ask, but the Dodgers’ right-hander does plan on returning to the field in less than 60 days. His delayed debut this season is “related to COVID from the past,” per Jorge Castillo of the LA Times. It’s a peculiar situation surrounding the flame-throwing Venezuelan. He’s not hurt, simply behind. He didn’t begin throwing this spring until late in March, and he’s still working himself into game shape. Let’s make the rounds to see how other arms are progressing out west…

March 25: Freeland will not require surgery, manager Bud Black announced Thursday, calling the initial reports from the team’s medical staff “encouraging” (link via Saunders). That said, Black also declined to provide a timeline, revealing only that Freeland will have more imaging performed “in a couple of weeks,” at which point the Rockies hope to be able to offer a more definitive timeline. Freeland will open the season on the injured list.

March 23: Rockies left-hander Kyle Freeland exited his outing against the Athletics on Tuesday with a strained pitching shoulder, per Patrick Saunders of the Denver Post. Freeland left the mound in pain after throwing a pitch to the A’s Mark Canha, as Thomas Harding of MLB.com tweets.

There is no word on how serious Freeland’s injury is, but it does look like one that could sideline him for at least the beginning of the regular season. A healthy Freeland would follow No. 1 starter German Marquez in the Rockies’ rotation, having thrown 70 2/3 innings of 4.33 ERA/4.95 SIERA ball last year. Those aren’t great numbers – especially compared to a 2018 effort in which Freeland put up a 2.85 ERA/4.35 SIERA in 202 1/3 innings and finished fourth in National League Cy Young voting – but they were markedly better than the 6.73 ERA/5.19 SIERA he recorded over 104 1/3 frames in 2019. The 27-year-old has followed last season’s bounce-back performance with seven scoreless innings and six strikeouts against one walk this spring.

If Freeland isn’t available to start the season, the Rockies will open with Marquez, Jon Gray, Austin Gomber and Antonio Senzatela as their top four. Ryan Castellani, Antonio Santos and Jose Mujica are also on their 40-man roster, but Dereck Rodriguez and Chi Chi Gonzalez are in the mix as NRIs.

Denver native Kyle Freeland was a revelation for the Rockies in his sophomore season, posting a 2.85 ERA/3.67 FIP over 202 1/3 innings. Two years later, however, and the Rockies have yet to discuss an extension with their homegrown star, writes the Athletic’s Nick Groke. Freeland’s 2018 was an almost as a magical affair, so starved is the Rockies franchise for a cornerstone rotation piece. The bubble burst in 2019, of course, as his run prevention numbers ballooned to a 6.73 ERA/5.99 FIP. He found a middle ground over 70 2/3 innings in 2020, logging a 4.33 ERA/4.65 FIP with a 15.1 percent strikeout rate, 7.6 percent walk rate, and 51.5 percent groundball rate. Freeland agreed to a $5.025MM deal for 2021 on Friday, and he has two more seasons of arbitration before reaching free agency. Given the range of outcomes Freeland has already seen across four seasons, he’s likely to go year-to-year until reaching free agency after 2023. Let’s stay out west and check in with the Angels…

The deadline to exchange arbitration figures is today at 1pm ET. As of this morning, there were 125 arbitration-eligible players who’d yet to agree to terms on their contract for the upcoming 2021 season. Arbitration is muddier than ever before thanks to the shortened 2020 schedule, which most believe will lead to record number of arb hearings this winter. Be that as it may, it’s still reasonable to expect dozens of contractual agreements to filter in over the next couple of hours.

We’ll highlight some of the more high-profile cases in separate posts with more in-depth breakdowns, but the majority of today’s dealings will be smaller-scale increases that don’t radically alter a team’s payroll or a player’s trade candidacy. As such, we’ll just run through most of today’s agreements in this post.

I’ve embedded MLBTR’s 2021 Arbitration Tracker in the post (those in the mobile app or viewing on mobile web will want to turn their phones sideways). Our tracker can be sorted by team, by service time and/or by Super Two status, allowing users to check the status on whichever groups of players they like. You can also check out Matt Swartz’s projected arbitration salaries for this year’s class, and we’ll do a quick sentence on each player’s agreement at the bottom of this post as well, with the most recent agreements sitting atop the list.

END_OF_DOCUMENT_TOKEN_TO_BE_REPLACED

If you’re of the belief that a pitcher can’t thrive despite calling the hitters’ haven known as Coors Field home, think again. Rockies left-hander Kyle Freeland did so in 2018, a year in which he finished fourth in National League Cy Young voting. He pitched to an excellent 2.85 ERA/3.67 FIP across 202 1/3 innings that season, giving the Rockies and the rest of the baseball world the impression that the club, long starved for solid starting pitching, had a front-line one-two punch on its hands in him and German Marquez. While Marquez did continue to produce last year, Freeland declined to a dramatic extent – no doubt one of the reasons the Rockies went from a playoff team to a bottom feeder.

Things went so awry for Freeland in 2019 that he spent a sizable portion of the season in the minors. The Rockies demoted Freeland to Triple-A Albuquerque on May 31 and didn’t recall him until the middle of July. Freeland wasn’t remotely effective during his time last year in the minors, where he pitched to an 8.80 ERA with 8.5 K/9 and 4.9 BB/9 in 29 innings. He was better in the majors, but that’s not saying much. In fact, it’s hard to find a pitcher who went downhill faster from 2018 to last season than Freeland, who logged a 6.73 ERA/5.99 FIP across 104 1/3 frames as a Rockie.

So what happened? Home runs, for one. The HR bug bit many a pitcher during what was a historically power-happy season. Freeland didn’t elude the long ball, as his HR-to-fly ball rate climbed from 8.5 percent during his Cy Young-contending effort two years ago to 21.7 last season. And Freeland, whose typical fastball sits in the 92 mph range, has never been much for strikeouts, but that was especially the case in 2019. He struck out fewer than seven batters per nine and ranked 12th last among all starters who threw at least 100 innings in strikeout-walk percentage (8.5). The fastball betrayed Freeland, who – according to FanGraphs – dominated with that pitch during his dream ’18. Last season was a different story, though, as Freeland’s heater ranked near the basement of the league in efficacy. 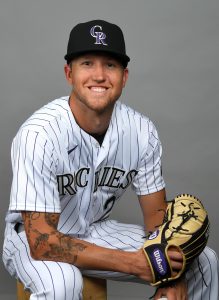 To make matters worse, Freeland wasn’t any kind of Statcast favorite. Rather, he finished below average in just about all of its categories. To list a couple examples, his expected weighted on-base average rose by 62 points from the previous year, while his hard-hit rate jumped by almost 11 percent.

“I didn’t feel confident at all,” Freeland admitted to Shane Monaghan of 5280 Magazine in regards to 2019. “I was just hoping not to give up runs.”

Freeland has since adjusted his delivery, which he and the Rockies hope will do the trick.

“You aren’t going to see the long pause,” manager Bud Black told Monaghan. “It will be a free-flowing, momentum-building delivery.”

It’s quite possible we’ll never see the Cy Young-type version of Freeland again, though it may also be fair to give him the benefit of the doubt. The pedigree’s there (Freeland was the eighth overall pick in the 2014 draft), he’s still just 26 years old and even before his brilliant showing two seasons back, he fared well as a rookie in 2017. Nobody knows whether there will even be Major League Baseball this year, but if there is, Freeland will enter the campaign as one of the game’s most intriguing bounce-back candidates.

The Rockies lost 91 games in 2019, and they haven’t signed a single major league free agent, but Chairman and CEO Dick Monfort predicts a 94-win season in Colorado, per The Denver Post’s Kyle Newman. That would be a franchise high for the Rockies, who thrice have won 90 games but never exceeded 92. And of course, they have yet to capture their first NL West crown. Let’s stick with the Rockies…