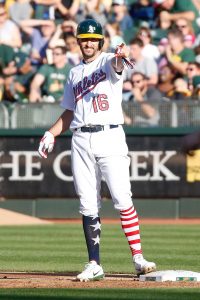 Rising Twins prospect Alex Kirilloff is now represented by Scott Boras, Dan Hayes of The Athletic reports (subscription link) as part of a look at the super-agent’s commentary on the Minnesota organization. That puts both of the organization’s top pre-MLB players (Kirilloff and Royce Lewis) in the Boras stable. A burgeoning book of business with the Twins did not stop Boras from tweaking the club, though if anything it seemed more a playful jab to set up a free-agent or prospect promotional pitch. The Twins had a rough 2018 campaign, to be sure, but have loads of free payroll to work with and some exciting young talent reaching or nearing the majors. Their offseason remains a fascinating one to watch.

Elsewhere in the American League …

Kyle Lohse may not sign with a team until after the first-year player draft takes place in June, writes Jim Bowden of ESPN.com (Insider sub. required).  Where might Lohse sign?  Bowden writes that the Rangers are the most likely destination if he signs before Opening Day, while the Brewers, Orioles, Angels, and Reds are also candidates. Here are more links from around MLB…

Bobby Crosby's comeback attempt is on hold, as the Brewers have granted the infielder his release. Tom Haudricourt of the Milwaukee Journal Sentinel reports that the Brewers have released Crosby, who signed a minor league deal with the team in January (Twitter link). The TWC Sports client would have earned $800K at the MLB level plus $450K in incentives.

Crosby, 33, last played at the MLB level in 2010. The former AL Rookie of the Year has a .236/.304/.372 batting line over the course of eight big league seasons and has at least 20 games of experience at all four infield positions.

The Brewers signed Bobby Crosby to a minor league contract with an invitation to MLB Spring Training, Ken Rosenthal of FOX Sports reports (on Twitter). The deal would pay Crosby $800K if he makes the team and includes $450K in incentives. TWC Sports represents the former AL Rookie of the Year.

Crosby, who turned 33 this month, last played at the MLB level in 2010. He has a .236/.304/.372 batting line over the course of eight big league seasons and has at least 20 games of experience at all four infield positions.

Some free agent notes from around MLB…

We're weeks into Spring Training now, so few notable free agents remain. But some players (min. 50 PAs) and pitchers (min. 20 IP) remain unsigned. Here's a look at the remaining free agents who will play the 2011 season while no older than 32:

Three teams are interested in Bobby Crosby, MLBTR has learned. Two American League clubs and one National League club have expressed interest in the 31-year-old. One of the interested teams is eyeing Crosby as a shortstop and the two others view him as a possible utility player.

Crosby is preparing to go to Spring Training and compete for a spot on a 25-man roster; the market for the former Rookie of the Year should become clearer within a week or so.

In 189 plate appearances for Pittsburgh and Arizona last year, Crosby hit .220/.294/.298 and played all four infield positions. The D'Backs released Crosby in August and there hasn't been any hot stove news about him since.