Rounding up some minor moves around the game:

The Pirates have selected the contracts of lefty Robbie Erlin and catcher John Ryan Murphy, per the team’s transactions page. Both had been assigned to the alternate training site but will now join the 40-man roster.

These moves were obviously made with an eye to structuring the Bucs’ Opening Day roster. With thirty roster spots to fill, the rebuilding club has quite a lot of openings to tinker with. These two players — both of whom are 29 years of age, were selected in the early rounds of the 2009 draft, and debuted in 2013 — are among the beneficiaries.

There was an especially clear need behind the dish in Pittsburgh. Murphy has never fully established himself as a MLB-caliber hitter, with a cumulative .219/.265/.357 slash line over 674 total plate appearances. But he’s trusted to handle backstop duties, having appeared with four different organizations over the past seven seasons.

Like most teams, the Pirates are likely to dedicate much of their added roster availability to pitching. Erlin will join a number of other arms hoping for their names to be called in on the bullpen phone. He could end up functioning as a situational lefty and/or long reliever. The 29-year-old carries a 4.57 ERA in 313 total MLB innings, all with the Padres.

The Pirates have signed catcher John Ryan Murphy to a minor league contract with an invitation to Major League Spring Training, reports Rob Biertempfel of The Athletic (via Twitter). He’s represented by ISE Baseball.

Murphy, 28, spent the bulk of the 2019 season with the D-backs, although he finished out the year with a brief stint in the Braves organization. He’s a light-hitting backstop who’s generally considered to be among the game’s premier options in terms of pitch framing. Murphy was once considered a solid catching prospect with the Yankees and Twins, but to this point in his career he’s managed only a .219/.265/.357 batting line through 674 plate appearances. He hit well, particularly relative to other catchers, up through the Double-A level but owns a tepid .244/.306/.380 line through parts of five Triple-A seasons.

Pittsburgh’s catching mix is fairly open at the moment. Jacob Stallings is the favorite to handle starting duties after posting a respectable batting line and playing strong defense in 2019. Luke Maile joined the organization as a free agent and was given a 40-man roster spot, placing him in line to serve as the backup to Stallings. Murphy, though, will provide some competition for Maile (a high-end framer himself) and can otherwise serve as an experienced depth option in the upper minors if he’s unable to break camp with the team.

The Braves announced today that they have selected the contract of catcher John Ryan Murphy. A 40-man roster spot was cleared by placing injured utilityman Charlie Culberson on the 60-day injured list.

Murphy, 28, was added over the summer in a minor swap with the Diamondbacks. He had struggled to a .177/.250/.419 batting line in 69 MLB plate appearances with the Arizona organization.

The Braves likely intend to utilize Murphy to reduce the wear and tear on the club’s primary backstops. With the division all but sewn up, the focus now is on preparing the roster for the postseason. While he’s technically eligible for the playoffs if needed, Murphy is fourth on the depth chart.

The 28-year-old Murphy will continue with the D-backs, who acquired him from the Twins for left-hander Gabriel Moya in July 2017. It was the second trade of Murphy’s career, as the Yankees sent him to the Twins for center fielder Aaron Hicks in a November 2015 swap. Needless to say, New York got the better end of that transaction.

Dating back to his big league debut with the Yankees in 2013, Murphy has hit .219/.265/.357 (65 wRC+) with 18 home runs in 673 plate appearances. While Murphy limped to a 70 wRC+ in 69 PA this year before Arizona cut him from its 40-man roster, his defense has been an asset in the desert. Baseball Prospectus has given the backstop outstanding grades behind the plate over the past year-plus, and Murphy even served as ace Zack Greinke’s personal catcher until the team went in another direction.

We may have seen the last of Murphy in Arizona, where he has played since the club acquired him from Minnesota for lefty Gabriel Moya in July 2017. Since then, Murphy’s just a .195/.243/.383 hitter in 299 plate appearances. The 28-year-old has taken 69 trips to the plate this season and slashed .177/.250/.419 with four home runs and a whopping 40.6 percent strikeout rate, though he has acted as the personal catcher for righty Zack Greinke. Murphy has caught all 11 of Greinke’s starts and graded as a plus pitch framer.

For the Diamondbacks, the decision to move on from Murphy shows they’re committed to giving more playing time to Carson Kelly, Nick Piecoro of the Arizona Republic writes. Kelly, whom the team acquired from St. Louis in the offseason as part of the clubs’ Paul Goldschmidt trade, has come out of Yadier Molina’s shadow to perform well so far in 2019. He and Alex Avila will comprise the D-backs’ top two catchers going forward.

Padres outfielder Alex Dickerson has been diagnosed with a sprained ulnar collateral ligament in his left (throwing) elbow, and surgery is a possibility, writes MLB.com’s AJ Cassavell. It’s a tough break for the 27-year-old Dickerson, who missed all of the 2017 season following back surgery but showed some promise at the plate in his rookie campaign in 2016. That year, Dickerson slashed .257/.333/.455 with 10 homers in 285 plate appearances while walking at a 9.1 percent clip and fanning in just 15.4 percent of his plate appearances. Per Cassavell, the club is “hopeful” that Dickerson won’t require Tommy John surgery, but even if he doesn’t require surgery, he’s likely to miss at least the first month of the season. 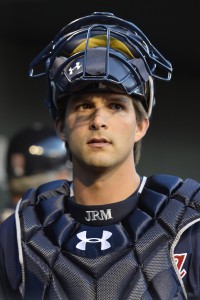 Following their reported signing of Juan Uribe to a one-year deal, the Indians “seem to be considering” a run at free agent outfielder Austin Jackson, tweets Jon Heyman. Cleveland has a well-documented need in the outfield that has yet to be addressed — as Jeff Todd and I discussed on this week’s MLBTR Podcast. Jackson would add some stability to the picture at a potentially bargain rate at this juncture of the offseason and on the heels of a pair of so-so seasons at the plate. Heyman notes that there are other possibilities for Jackson, though, citing the White Sox, Angels, Brewers and “maybe” the Rangers, noting that Texas may not want to spend the money. It’s unclear whether Heyman was merely speculating on that last grouping of teams, though given the Angels’ reluctance to spend on free agents this winter and Texas GM Jon Daniels’ recent comments suggesting the payroll isn’t likely to grow much more, Jackson could be a stretch for either club.

Here’s more on the AL Central…