The Pirates’ middle infield is fairly open at the moment, with several talented young players who could eventually seize jobs on a more permanent basis but haven’t done so just yet. To that end, general manager Ben Cherington told members of the media, including Kevin Gorman of the Pittsburgh Tribune-Review, that the club wouldn’t rule out another external addition.

“I think we want to create competition there certainly, whether it’s guys that are already here. Wouldn’t rule out adding an infielder, either,” Cherington said. “I would emphasize the competition, but there will be a runway to be part of that competition and continue to earn it.”

At first glance, the idea of Pittsburgh adding a depth infielder is a little odd since they just traded Kevin Newman to the Reds. That move opened up the path for younger players to seize playing time, but evidently left them not totally satisfied with their remaining options. There’s possibly a financial component, as Newman was projected by MLBTR contributor Matt Swartz to make an arbitration salary of $2.8MM, which the Bucs will no longer have to worry about. They could redirect some of those funds to replace Newman, while having added reliever Dauri Moreta, the return in the trade.

It doesn’t seem like bringing in a reinforcement is a must, just something that’s on the table as the club gauges the temperature of the offseason. That’s a fairly logical approach, since they do have plenty of in-house options, though they are written in pencil and not in ink. Oneil Cruz is now the clear top shortstop with Newman out of the picture. He has tantalizing tools, such as elite exit velocities, sprint speed and arm strength. However, he struck out in 34.9% of his plate appearances last year and has long faced questions about whether he and his 6’7″ frame can stick at short in the long run. The reviews in 2022 were mixed, as Defensive Runs Saved gave him a 1 while Ultimate Zone Rating and Outs Above Average were much more pessimistic, giving him a -.7.5 and -9, respectively.

The corners seem to be fairly set for next year, with Ke’Bryan Hayes at third and Ji-Man Choi at first. The latter is an impending free agent and a midsummer trade candidate, though perhaps today’s waiver claimee Lewin Diaz can take over at that point. Cruz seems likely to get some more time to continue the shortstop experiment for the near future, with several candidates on hand to take over a full-time second base job or utility role.

Rodolfo Castro had a solid showing this year, hitting 11 home runs and stealing five bases in just 71 games. He finished the year with a batting line of .233/.299/.427, which amounted to a wRC+ of 102, or 2% above average. He played between 19 and 32 games at each of second, third and short and is a switch-hitter, making him well-suited to a utility role. Though it’s also possible he separates himself from the pack and seizes the job at the keystone.

Ji Hwan Bae got a cup of coffee towards the end of the year, hitting well in 10 games while showcasing his speed. He added three steals at the big league level to go with the 30 he tallied in the minors prior to his call-up. He played some second base with the big league club but also center and left field.

The Pirates are obviously rebuilding and very few expect them to emerge as surprise contenders in 2023, which means this jumble will likely be straightened out as the season goes on. If they look into adding a more established player to the mix, they surely won’t be going after top free agents like Carlos Correa, Trea Turner, Xander Bogaerts or Dansby Swanson. Even the next tier of free agents like Elvis Andrus, Jean Segura and Jose Iglesias will likely be looking for more secure jobs than just the placeholder gig in Pittsburgh. That means the Bucs will likely be in contact with options like Hanser Alberto, Yu Chang, Tyler Wade or Danny Mendick. On the trade market, guys like Isiah Kiner-Falefa and Cavan Biggio could be available, though it’s also possible that Cherington keeps working the waiver wire.

A waiver claim out of the Rays organization last offseason, Pérez saw 70 games worth of action with the Pirates behind number one catcher Jacob Stallings. Unfortunately for both player and team, Perez continued to struggle at the plate despite providing serviceable defense behind it. Through 231 plate appearances the left-handed catcher produced at a .143/.221/.290 clip, though he did hit a career-best 7 home runs. He’s likely to latch onto an organization this winter as catching depth.

Liover Peguero, acquired in the trade that sent Starling Marte to Arizona, is ranked the #5 prospect in a solid Pittsburgh farm system. The speedy 20-year-old performed respectably last season across 90 games at the high-A level, setting a new high watermark in home runs with 14 to go with 28 steals (in 34 tries). The resulting .270/.332/.444 output, plus what scouts consider to be above average defense at shortstop, gave Pittsburgh ample reason to protect their up-and-coming prospect.

The 22-year-old Canaan Smith-Njigba was a 4th-rounder by the Yankees in 2017 before they traded him to Pittsburgh as part of the Jameson Taillon deal. A solid .274/.398/.406 led to a cup of coffee at Triple-A, and a terrific showing in the Arizona Fall League has the left fielder knocking on the Major League door.

Centerfielder Travis Swaggerty, a first-round draft pick by Pittsburgh in 2018 and a one-time top 100 prospect in the eyes of some evaluators, saw little action this past season. The left-handed hitter produced a decent .220/.333/.439 line in 12 Triple-A games before incurring a season-ending shoulder injury. Well-rounded tools at a premium position, plus his pedigree, will keep him in the Pirates organization for awhile longer.

Lastly, Jack Suwinski, acquired in this past summer’s Adam Frazier deal, had a decent 2021 season in his own right. The 23-year-old popped 19 home runs across 111 games at the Double-A level, culminating in a strong .262/.383/.485 slash. Though most of that production came prior to the trade, MLB.com lists Suwinski among the Pirates top prospects (#29) and projects him as a bat-first option in right field. 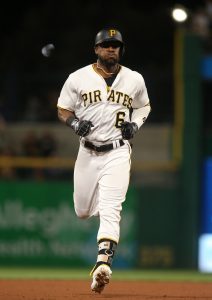