The Giants have re-signed infielder Marco Scutaro to a Major League contract and immediately placed him on the 60-day DL, according to Henry Schulman of the San Francisco Chronicle (Twitter links). The move is a symbolic gesture that will allow Scutaro to retire as a member of the Giants organization. The 39-year-old will continue to rehab, Schulman says, but only to improve the quality of life he can have in his post-playing days. It’s a classy move from the organization that released Scutaro this past January in order to free up a spot on the team’s 40-man roster. Scutaro’s final seasons with the Giants were slowed by a number of back injuries that limited him to 127 games in 2013 and just five games in 2014. As the Chronicle’s John Shea tweets, the Giants made this move as a gesture because they didn’t want a playoff hero’s career to end with a release.

“Playoff hero” is certainly an apt description for Scutaro, but it may actually undersell his importance to the 2012 Giants. Acquired from the division-rival Rockies in exchange for Charlie Culberson, Scutaro took San Francisco by storm in the second half of the 2012 season. He batted a Herculean .362/.385/.473 in 61 contests for the Giants down the stretch before hitting .500 (14-for-28) and taking home NLCS MVP honors. The Giants, of course, would go on to win the World Series in decisive fashion, sweeping the Tigers to take home their second championship in three years.

Scutaro’s brilliant performance led the team to re-sign him to a three-year, $20MM contract that offseason. Though the aforementioned injuries did limit his playing time in 2013, Scutaro still batted a very solid .297/.357/.369 in the 127 games he was healthy, combining that above-average production with sound defense and plus baserunning to produce more than two wins above replacement.

Originally signed by the Indians in 1994, Scutaro is a personification of the “late bloomer” in sports. He debuted with the Mets in 2002 at the age of 26 but didn’t total more than 91 plate appearances in either of his two years with New York. The A’s gave Scutaro his first semi-regular action in 2004, but he never even reached 500 plate appearances in a single season until 2008 with the Blue Jays — his age-32 season. Until that point, Scutaro had looked the part of a solid utility player rather than a starter.

Sound work with the Blue Jays in 2008-09 led the Red Sox to sign him to a two-year, $12.5MM contract with a club option for a third season. Scutaro was again very good in two seasons with Boston (.284/.343/.401), who traded him to the Rockies prior to 2012 in exchange for right-hander Clayton Mortensen.

All told, Scutaro will finish his career with a .277/.341/.388 batting line, 77 homers, 55 steals, 22.2 rWAR and 18.6 fWAR. He earned nearly $49MM, according to Baseball-Reference.com — an incredible sum for someone who had essentially been a light-hitting utility infielder through his age-31 season in the mid-2000s. We at MLBTR wish Marco the best of luck as well as health and happiness in his post-playing career.

Shelby Miller and Tyrell Jenkins had varying reactions to being traded to the Braves in the Jason Heyward deal, Michael Cunningham of the Atlanta Journal-Constitution writes. Miller, who learned he’d been dealt before learning which team had traded for him, was apprehensive at first, but ultimately happy to learn that he was heading to Atlanta. Jenkins, a former Cardinals first-round pick, was “upset” to be leaving that organization, although he eventually came around to the idea that the Braves must really want him to acquire him in a trade for a player of Heyward’s caliber. Both Miller and Jenkins credit Cardinals ace Adam Wainwright with helping them as pitchers. Miller says Wainwright encouraged him to throw a sinker (although it wasn’t until Justin Masterson showed him a grip he liked that he actually started using it). Jenkins, meanwhile, credits Wainwright with helping him with his delivery. Here are more notes from around the National League.

JANUARY 28: Scutaro has been released, according to the MLB.com transactions page.

JANUARY 21: The Giants have designated infielder Marco Scutaro for assignment, Henry Schulman of the San Francisco Chronicle reports (Twitter links). His roster spot will go to the recently-signed Nori Aoki.

San Francisco expects to retain Scutaro once he clears outright waivers, which seems a virtual certainty given his injury status and the $6MM left on his deal. Per Schulman, the team still hopes that the 39-year-old veteran will be able to return from his back issues (which included surgery in December).

When Scutaro went in for fusion surgery last month, it was reported that it would take four to six months before his future on the diamond can even be assessed. Needless to say, the odds of a return at this point appear to be low.

The 13-year big league veteran signed for three years and $20MM as a free agent after originally joining the team in the middle of 2012 and playing a major role in a World Series victory. He has only made 560 plate appearances under that contract due to injury, though he was as productive as hoped for when on the field in 2013.

Rockies shortstop Troy Tulowitzki tells The Denver Post’s Patrick Saunders he hears the trade rumors, but that isn’t his focus this winter. “I have been talking to the Rockies throughout the process,” Tulowitzki said. “We have respect for each other. But my concentration right now is just on getting healthy.” Tulowitzki, recovering from August hip surgery, has yet to start baseball activites but has begun light running and is continuing a program to increase flexibility in his hips. Here’s the latest from MLB’s West divisions:

The Giants are interested in Indians infielders Asdrubal Cabrera and Mike Aviles, reports Jon Paul Morosi of FOXSports.com (via Twitter). Of course, the Indians have to decide they are sellers, which might come down to the trade deadline. Cleveland’s record is currently 49-47 and they’re 5.5 games behind the Tigers in the division. They’re one of three teams sitting just two games back of the Mariners for the second wild card spot.

Cabrera, 28, will be a free agent following the 2014 season. The shortstop is owed roughly $4MM. His defense draws critical remarks. Over the years, many insiders have speculated Cabrera is better suited to play second base, which fits the Giants’ needs. Aviles, a 33-year-old utility infielder, has a $3.5MM club option for 2015 ($250,000 buyout).

In his Sunday Baseball Notes column, Nick Cafardo of the Boston Globe reminisces about a pitchers’ duel between the Red Sox’s Luis Tiant and the Angels’ Nolan Ryan 40 years ago, the likes of which we may never see again in today’s game. Tiant threw 195 pitches and was still on the hill when the Angels scored the game-winner with one out in the bottom of the 15th inning. Ryan, meanwhile, tossed 235 pitches in a meager 13 innings of work. “When you took the baseball, you wanted to finish what you started,” Tiant told Cafardo. “I didn’t even feel tired. I could have gone as long as I had to go. They beat me on a ground ball that went through the second baseman’s legs. It was the 15th inning and I was OK.” The last pitcher to pitch more than nine innings in a MLB game was Cliff Lee, who lasted ten innings in April 2012.

Due to his back injury, Marco Scutaro still isn't playing in extended spring training games, but it's unlikely the Giants will make a trade to replace him anytime soon, Henry Schulman of the San Francisco Chronicle writes. This week's Ike Davis trade aside, deals involving valuable players generally aren't made in April, and the Giants would likely have to pay heavily to acquire a talented infielder. Later this summer, the Giants still might not make second base their top priority, Schulman suggests — they may instead focus on their bench. Here are more notes from the West divisions.

A number of notable clubs entered Spring Training looking for clear answers at second base, and other teams could face looming questions at the position.  Here's a roundup of items about the keystone…

Here's a look at the latest out of the National League Central.. 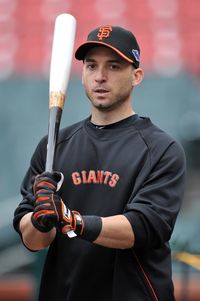