The Dodgers officially announced their five-year, $85MM extension with Andre Ethier this afternoon on a day that featured lots of draft news. Here are some of Tuesday’s non-draft-related links, starting in Los Angeles…

Teahen, 30, hit .200/.273/.300 in 177 plate appearances for the White Sox last year, appearing at the infield and outfield corners.  The Blue Jays took Teahen and his contract from the White Sox last summer to facilitate their temporary acquisition of Edwin Jackson.  The Jays ended up releasing Teahen last month.  He's represented by CAA Sports.

The Blue Jays announced that they have given Mark Teahen his unconditional release. They designated the infielder/outfielder for assignment earlier in the month and will be responsible for paying his $5.5MM salary in 2012.

Teahen joined the Blue Jays in the three-way deal that sent Edwin Jackson to St. Louis and Colby Rasmus to Toronto. The 30-year-old posted a .200/.273/.300 line in 177 plate appearances for the White Sox and Blue Jays in 2011, appearing at all four corner positions.

Teahen was a big component of the 2004 trade that sent Carlos Beltran to the Astros.  He couldn't sustain a strong partial season in 2006 for the Royals, and was traded to the White Sox in November of '09.  A few months later the Sox signed him to a surprising three-year, $14MM extension.

Some links from the AL East… 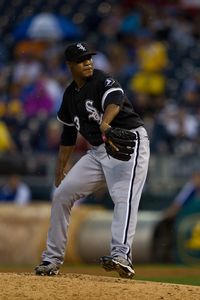 Links from the AL Central, before the second-place Royals host the first-place Indians…