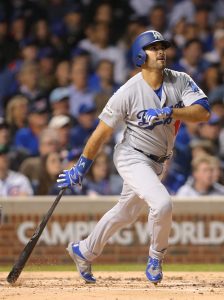 Yankees manager Aaron Boone suggested Sunday that they won’t sign either Lance Lynn or Alex Cobb, yet the team has “maintained contact with Lynn throughout the offseason,” Jon Morosi of MLB.com writes. The Yankees are monitoring the top available starters in general, according to Morosi, who hears that the Brewers, Phillies, Rangers, Orioles and Nationals are doing the same. The Angels, meanwhile, are open to signing the best free agent reliever, Greg Holland, if the price is right, per Morosi. The Halos’ bullpen has seemingly taken a step back since last year ended, having lost Yusmeiro Petit and Bud Norris to free agency and added only Jim Johnson. While Holland would help make up for those exits, he’s presumably not going to sign for cheap, and inking the qualifying offer recipient would cost the Angels their second-highest draft pick this year and $500K in international spending room.

More from around baseball:

1:08pm: Former Dodgers outfielder Andre Ethier has told family and friends that he is retiring, Robert Murray of FanRag reports. The 35-year-old Ethier had been on the open market since Nov. 5, when the Dodgers declined his $17.5MM option for 2018 in favor of a $2.5MM buyout. 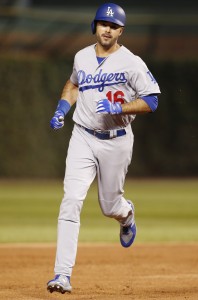 Ethier turned pro when the Athletics used a second-round pick on him in the 2003 draft, but he never cracked the majors with the A’s. Rather, he spent his entire big league career with the Dodgers, who acquired him in exchange for outfielder Milton Bradley and infielder Antonio Perez in 2005. Ethier debuted in Los Angeles in 2006 and immediately became a staple of the team’s offense, slashing .308/.365/.477 in 441 plate appearances to finish fifth in the National League Rookie of the Year voting.

While Ethier took a step back during his second season, he rebounded in 2008, the beginning of a six-year stretch defined by both terrific offensive production and durability. Ethier appeared in between 135 and 160 games in each of those seasons and combined to bat .286/.363/.471 with 117 home runs and 16.6 fWAR in 3,588 PAs. The sweet-swinging lefty earned two All-Star appearances (2010-11), a Silver Slugger (2009) and a Gold Glove (2011) during that period, in which the Dodgers clinched three playoff trips.

Ethier did enough over his first several seasons for LA to award him a five-year, $85MM contract extension in June 2012, though the deal didn’t work out as hoped. While the Dodgers won the National League West in each of Ethier’s final five seasons and took home the NL pennant in 2017, he wasn’t a consistent contributor over the life of the contract, in part because of injuries. Ethier totaled a mere 26 PAs in 2016 after suffering a broken leg in spring training and racked up just 38 trips to the plate in his final season as he dealt with back problems. He did participate in the Dodgers’ run to the World Series, though, with four hits and two walks in 15 PAs. In what will go down as the last at-bat of his career, Ethier knocked in the Dodgers’ only run of their Game 7 World Series loss to Houston with a pinch-hit single in the sixth inning.

A lifetime .285/.359/.463 hitter who amassed 162 homers, Ethier stands as one of the most productive offensive players in the Dodgers’ storied history. He ranks in the franchise’s top 20 in games, PAs, at-bats, homers, hits, extra-base hits, total bases, walks and runs batted in.

Either will walk away from the sport having earned upward of $112.6MM as a Dodger, per Baseball-Reference. MLBTR congratulates Ethier on a terrific career and wishes him the best in retirement.

The Dodgers have declined outfielder Andre Ethier’s $17.5MM club option for 2018 in favor of a $2.5MM buyout, Ken Gurnick of MLB.com reports (on Twitter).

Moving on from Ethier at that lofty price tag was an easy decision for the Dodgers, who saw the 35-year-old deal with significant injury issues over the past two seasons and combine for a mere 64 plate appearances. In 2017, back problems kept Ethier out until September and prevented him from contributing to the Dodgers’ fifth straight NL West-winning effort, but he was able to partake in his eighth postseason with the club. Ethier totaled 15 playoff plate appearances this season, including six in the Dodgers’ World Series loss to the Astros. In what is likely to go down as his final at-bat with the franchise, Ethier picked up a pinch-hit RBI single in LA’s 5-1 loss in Game 7 of the Fall Classic.

Prior to the past two seasons, Ethier was a consistent offensive presence for the Dodgers. The 2003 second-round pick debuted in 2006 and proceeded to slash an impressive .286/.359/.464 with 159 home runs through the 2015 campaign. The success Ethier had early in his career led the Dodgers to sign him to his most recent deal, a five-year, $85MM extension, in June 2012.

With his Dodgers tenure in the rearview, the lefty-swinging Ethier will head to the open market, though his age, recent health troubles and longstanding woes against same-handed pitchers will work against him in free agency. Still, Ethier was a terrific offensive player as recently as 2015, slashing .294/.366/.486 in 445 PAs, and could garner interest from teams looking for a designated hitter.

The Dodgers have designated outfielder (and partially converted pitcher) Brett Eibner and lefty Luis Ysla for assignment, per a club announcement. With Grant Dayton heading to the 60-day DL after undergoing Tommy John surgery, the club cleared the way for several September promotions.

As expected, top prospect Alex Verdugo and veteran Andre Ethier will both make their way onto the active roster. The former will be joined by first baseman/outfielder O’Koyea Dickson in appearing in the majors for the first time. Ethier is headed back to the bigs for the first time this season after an extended DL stint.

Meanwhile, Los Angeles also announced that Clayton Kershaw has been activated from the 10-day DL. Outfielder/first baseman Rob Segedin — like Dickson, a potential righty bench bat — has also been recalled from optional assignment.

Though he is now dealing with yet another setback and has not appeared in the majors since May of last year, Mets third baseman David Wright is not considering retiring, a source tells Mike Puma of the New York Post. A lingering shoulder injury is the most immediate problem limiting Wright, though he has also dealt with significant neck and back issues that he’ll continue to battle in the future. With three years and $47MM left on his contract, Wright will evidently keep trying to make it back to the majors, though at present it is unclear what course he’ll take in trying to overcome his maladies.

Here’s more on some other injury situations from around the game:

Reliever Brad Hand is the most sought-after trade chip the Padres have had since A.J. Preller took over as their general manager in 2014, reports AJ Cassavell of MLB.com. “Half the league or more” has called about Hand, a team source told Cassavell, which helps explain the Padres’ reportedly high asking price for the southpaw. San Diego feels as though it’s justified in seeking a significant return for Hand, per Cassavell, as the 27-year-old has been among the majors’ top relievers since breaking out last season and comes with affordable control through the 2019 campaign.

Here’s the latest on some notable health situations from around the game: