Bryce Harper of the Nationals and Manny Machado of the Orioles are young, controlled superstars who look like highly appealing extension targets. Of course, that also makes them incredibly expensive potential candidates for their respective teams, as Jon Heyman explains at todaysknuckleball.com. According to Heyman, there’s some suggestion that it could take more than $500MM over an unprecedented term to keep Harper from heading to the open market after the 2018 season. “We have not to this point had any substantive negotiations about a long-term deal,” Nats GM Mike Rizzo said with regard to Harper. Rizzo did suggest that the team has serious interest in doing so, however. “They know what our intentions are,” he said. “My intention is always to get him on a long-term deal that will make him a National for life. At a very young age he performed admirably, not only admirably, but the year he had was historic. It’s going to be a unique deal. We have a very unique player.”

As for Machado, he might not be far behind in value if the O’s hope to reach a deal. Intriguingly, the report suggests that Baltimore very nearly agreed to a seven-year contract with its best player at some point in recent years. That would have certainly proved a bargain given Machado’s increasingly outstanding performance, though the terms of the prospective pact are not known. (Neither is it clear what caused negotiations to fall apart.)

MLB’s competition committee has agreed to changes in the strike zone and the intentional walk that could go into effect next season, reports ESPN’s Jayson Stark. The changes would raise the strike zone slightly, from the bottom of the hitter’s knees to the top, thus creating a smaller zone for hitters and likely increasing offense. Also as a result of the proposed changes, a team could immediately issue an intentional walk without throwing the requisite four pitches. The changes must next be approved by MLB’s playing rules committee, which is led by Mets GM Sandy Alderson. Here are more quick notes from around the game.

Former Cardinals scouting director Chris Correa, who is pleading guilty to criminal charges for his role in the Cardinals’ unauthorized access of the Astros’ proprietary computer network, has had his sentencing hearing pushed back from June 6 to July 5 at the request of the probation office, reports David Barron of the Houston Chronicle (links to Twitter). As of January, Correa was slated to plead guilty to five of the 12 charges of unauthorized access to a private computer, with a maximum penalty of five years in prison per charge as well as a fine of $250,000, per a release from the United States Department of Justice.

More from the NL Central…

The Twins’ miserable start to the season is the result of a “total system failure” rather than any individual’s performance, club owner Jim Pohlad tells Chip Scoggins of the Minneapolis Star-Tribune. Pohlad says that GM Terry Ryan “is the right guy” to run the baseball operations department, while skipper Paul Molitor “has our total support.” The owner rejected the idea that more money would have done much good, saying: “I don’t believe that the money thing has been a constraint on the team’s success.” And he doesn’t seem to believe that the choices made with the funding were ill-considered. “We’ve been at this for a little while … the owner can’t do a whole lot,” he explained. “But what could Terry do? Or what could Paul do? I just don’t know at this point. It’s just a total system failure, so to speak.”

Here are a few more stray notes from around the game:

The Twins haven’t had any talks with Paul Molitor about a contract extension, Mike Berardino of the St. Paul Pioneer Press reports.  Molitor exceeded expectations in his first year as a Major League manager, leading the Twins to a surprising 83-79 record.  There isn’t necessarily a lot of urgency to get a new deal done — not only is Molitor still under contract through the 2017 campaign, “the expectation at this point is that” the Twins will give Molitor “every opportunity to” continue managing, Berardino writes, especially as long as Terry Ryan is the GM.  Here’s some more from around the AL Central…

Jake Arrieta’s no-hitter stands out as one of the best performances of the season, and the right-hander’s overall dominant campaign has positioned him as one of the front-runners for the NL Cy Young Award. A season this excellent — Arrieta is 17-6 with a 2.11 ERA, 9.3 K/9 and 2.2 BB/9 in 183 innings — makes for a lucrative arbitration raise, but his raise could be steeper than most assume. As MLBTR’s Tim Dierkes tweets, our arbitration projection model currently has Arrieta jumping to $9.9MM in 2016 — nearly triple his current $3.625MM salary. The Cubs control Arrieta through the 2017 season.

Here’s more on Arrieta and the game’s Central divisions…

The Twins announced that they have hired Hall of Famer and Minnesota native Paul Molitor as the successor to longtime manager Ron Gardenhire. Molitor, who has signed a three-year deal that runs through the 2017 season, will be introduced at a press conference tomorrow morning at 10am CT. 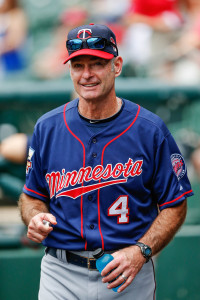 Molitor, 58, was seen as the favorite to land the position heading into the team’s managerial search. He served as a member of Gardenhire’s coaching staff in 2014, working with Twins players on baserunning, infield instruction/positioning and in-game strategy. He’s been credited as the primary factor behind the Twins’ much more aggressive adoption of infield shifting. As the St. Paul Pioneer Press’ Mike Berardino wrote back in April, the Twins shifted 46 times through their first 15 games this season after shifting just 87 times as a whole in 2013. Said Molitor at the time: “Information has changed a lot. It’s what we have available to us to prepare for a team. Guys have to extend their comfort zones.” Molitor has also spent a season as the Mariners’ hitting coach (2004) and worked for more than 10 years as a minor league coordinator in the Twins’ system.

The Twins interviewed roughly 10 candidates for the position, but the three finalists have long been reported to be Molitor, Class-A Advanced manager (and former Twins first baseman) Doug Mientkiewicz and Red Sox bench coach Torey Lovullo. Toward the end of the process, Lovullo and Molitor appeared to further separate themselves as the likely options.

Molitor was the third overall pick in the 1977 draft as a shortstop out of the University of Minnesota. He attended St. Paul’s Cretin-Derham Hall high school — the same school that produced current Twins first baseman Joe Mauer. Over the course of a 21-year big league career, Molito batted .306/.369/.448 with 234 homers and 504 stolen bases. He spent the final three seasons of his playing career as a Twin, collecting his 3,00th hit in the hometown uniform and leading the AL with 225 hits in 1996 at the age of 39.