Though Phillies righty Aaron Nola tells Matt Gelb of the Philadelphia Inquirer that he hasn’t thought much about the potential of signing a long-term deal with the Phils, Gelb opines that Nola is a prime extension candidate for the team this winter. The 24-year-old’s recent arm troubles present some risk in approaching him about a long-term pact, but there’s inherent risk when extending any pitcher, and Nola has established himself as an above-average starter over his two-plus seasons of work, Gelb argues. With Nola still a year away from arbitration eligibility, the Phils could look to strike now in hopes of securing control over one or more free-agent years, as they did with center fielder Odubel Herrera in the 2016-17 offseason. Gelb’s piece includes a number of potential comparables as well as quotes from Nola and teammate Clay Buchholz, who signed a long-term deal himself at a similar point in his career.

More out of the NL East…

Freddy Galvis’ pinch-hit double for the Phillies on Sunday may very well have been his final plate appearance with the team, writes CSNPhilly.com’s Jim Salisbury. Top prospect J.P. Crawford arrived in the Majors in September, and while he hardly set the world on fire with the bat (.214/.356/.300 in 87 plate appearances), he still could land the team’s Opening Day shortstop job next year. It’s likely that general manager Matt Klentak will shop both Galvis and second baseman Cesar Hernandez this winter, writes Salisbury, as the team will want to get a look at its potential middle infield of the future — Crawford and top second base prospect Scott Kingery — in 2018.

More on the Phils… 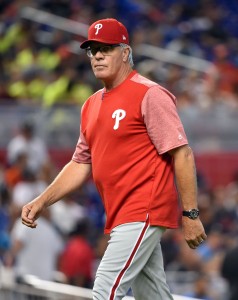 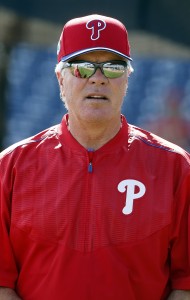 Red Sox outfielder Andrew Benintendi is the best prospect in baseball, according to Baseball America’s new top 100 prospects list. Following Benintendi is Yoan Moncada, who would have given the Red Sox the top two prospects in baseball had he not been traded to the White Sox this offseason. In fact, what sticks out about Baseball America’s list and other recent top prospect lists is just how many top talents have been traded lately, including Moncada as well as the players at spots No. 3 (Dansby Swanson), No. 5 (Gleyber Torres), No. 21 (Anderson Espinoza), No. 24 (Manuel Margot) No. 25 (Lucas Giolito), No. 27 (Lewis Brinson) and No. 29 (Jose De Leon). Here’s more from the East divisions.

The Phillies have announced that manager Pete Mackanin has been signed to a new contract that will cover the 2016 and 2017 seasons.  The deal also includes a club option for 2018.

This fresh contract overwrites the extension Mackanin received just last September when the Phils removed his interim tag and made him their official manager for the 2016 season.  That older deal gave Mackanin a guarantee for 2016 and a club option for 2017, whereas this new contract adds an extra year of security for the 64-year-old.

Mackanin stepped in as the Phillies’ interim manager when Ryne Sandberg resigned in June, and the team went 37-51 under his leadership.  More importantly than wins and losses for the rebuilding Phillies, Mackanin impressed upper management with his handling of the young talent.  In a statement when Mackanin was originally extended in September, Phillies president Andy MacPhail said “Since assuming the interim manager position in June, Pete has developed an excellent rapport with our players and has also connected well with the media and our fans. Equally as important is his eagerness to take on the challenge of rebuilding the team and further developing our players.”

Prior to taking over managerial duties, Mackanin served as the Phillies’ third base coach and bench coach in two stints with the club since 2009.  This is Mackanin’s first non-interim managerial job in the bigs after a long career of coaching and managing at both the Major League and minor league levels.

The Phillies have officially begun their GM search, as Andy MacPhail told reporters, including MLB.com’s Todd Zolecki, that they’ve interviewed one candidate. MacPhail, unsurprisingly, declined to specify the candidate in question, though he said the goal is still to have a new GM in place by the team’s organizational meetings, which begin on Oct. 26.

A few more notes on the Phils… 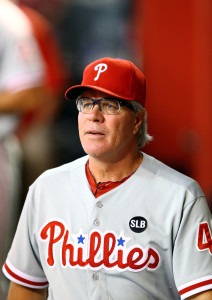