In an interview with Peter Gammons, Scott Boras expressed his confidence that Stephen Drew and Kendrys Morales will find good contracts with teams that will put more value on their contributions than the value of (possibly second- or third-round) draft picks.  With that said, Boras also believes the free agent system needs to be changed to give players more freedom and to encourage teams to spend.  “We should be doing everything possible to try to get smaller market teams the necessary veteran leadership to contend,” Boras said.  His suggestions include banning qualifying offers for players over 30 years old, and a monetary compensation system for teams who lose free agents under age-30 that the clubs can re-invest in signings or draft spending.

Here's some more from around the baseball world…

It's strange that a top-flight pitching talent would be traded five times, but that's exactly what happened to Curt Schilling, CBS Sports' Dayn Perry points out. Schilling had been traded three times before his career really got going as a 25-year-old with the Phillies in 1992. As one might imagine, the teams that traded Schilling didn't make out very well — he was dealt with Brady Anderson for Mike Boddicker, then with Steve Finley and Pete Harnisch for Glenn Davis, then straight-up for Jason Grimsley. By that time the Phillies traded him, he was very valuable, but the Phillies only got Vicente Padilla and change for him, and when the Diamondbacks dealt him, the only players they got who turned out to have value were Jorge De La Rosa and Brandon Lyon. Here are more notes from around baseball.

Yesterday, the Cardinals avoided arbitration with David Freese on a one-year, $3.15MM deal, which took care of all of their unsigned arbitration eligible players.  However, the third baseman says that he wants to be in St. Louis for life, writes Derrick Goold of the St. Louis Post-Dispatch.  "If a long-term deal is going to happen I know for a fact that I have to do some things. I have to be a leader. I have to do what I do on the field. I have do the things expected of me," Freese said.  Here's more from around baseball..

The Tigers are showing a lot of faith in 22-year-old Bruce Rondon by making him the frontrunner for the closer role, but Detroit would be better served by having legitimate closing options to choose from, opines Dave Cameron of Fangraphs in a piece for ESPN.com (Insider sub. req'd).  Developing your own closer rather than paying free agent prices for one is a good idea, but Cameron believes that the Tigers should probably have someone to hold down the fort while Rondon gains some big league experience.  Here's more from the AL and NL Central..

Despite indications to the contrary, the Twins never called to inquire about the availability of pitcher Anibal Sanchez, according to Darren Wolfson of ESPN 1500.  Sanchez, of course, re-signed with the Tigers for five years and $80MM earlier this offseason.  Here's more out of Minnesota, courtesy of Wolfson..

Mark Hale of the New York Post has a number of updates related to New York’s two teams. Here’s the latest (all links go to Twitter)…

Here's the latest on the Twins, courtesy of 1500 ESPN's Darren Wolfson…

The Red Sox have signed Scott Podsednik to a Major League contract, reports Ken Rosenthal of FOX Sports (on Twitter). Boston traded the outfielder to the Diamondbacks in the Matt Albers–Craig Breslow trade, but Arizona released him a few days later.

The Diamondbacks have granted Scott Podsednik his release after he declined an assignment to Triple-A, reports Nick Piecoro of The Arizona Republic (on Twitter). Arizona acquired him as part of the Matt Albers–Craig Breslow trade earlier this week. 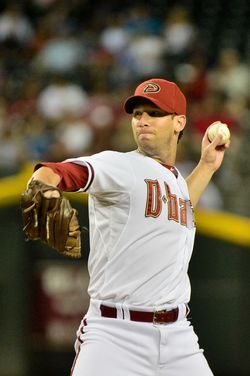