After searching the infield market for second base upgrades over the past few weeks, the White Sox announced Thursday that they’ve acquired veteran Cesar Hernandez from the division-rival Indians in exchange for minor league left-hander Konnor Pilkington. Chicago released right-hander Tyler Johnson in order to open a spot on the 40-man roster. 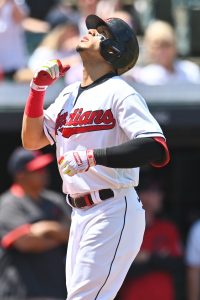 Second base has been a clear area of focus for a White Sox team that lost Nick Madrigal for the season (torn hamstring) earlier this year. Chicago has been hit hard by injuries in the outfield, but with Eloy Jimenez returning this week and Luis Robert on the mend, the infield began to look like a more logical target. The Sox have been connected to Jonathan Schoop, Trevor Story, Adam Frazier and other infield targets, but they’ll go with the solid, switch-hitting Hernandez to step in and solidify the lineup.

Hernandez, 31, is playing the season on a one-year, $5MM contract that contains a $6MM club option for the 2022 campaign. He’s still owed about $1.8MM of that $5MM sum through season’s end, and there’s no buyout on the option, so it’ll be a straight $6MM call for Chicago after the season. Given that Madrigal is expected to be healthy for the 2022 campaign, Hernandez could well be viewed as a rental option for the South Siders, although the $6MM price point isn’t so steep that he couldn’t be kept as a potential utility option.

Hernandez isn’t hitting for average as he typically does, but his 18 home runs already represent a career-high mark. He’s not striking out any less often than he did in 2020, when he batted .283, but Hernandez has been plagued by a career-low .256 average on balls in play that sits 74 points below his career mark. It’s possible, then, that he’s in for some positive regression over the season’s final couple months.

Even if that’s not the case, however, his .231/.307/.431 batting line is a solid enough plug-in to a strong ChiSox lineup. That production is exactly league-average after adjusting for Hernandez’s league and park, by measure of wRC+, which falls right in line with what Hernrnadez has been for the past six seasons.

On the Indians’ side of the swap, they’ll add Pilkington, a 23-year-old lefty whom the White Sox selected out of Mississippi State in the third round of the 2018 draft. He’s spent this season pitching in Double-A and has fared well, working to a 3.48 ERA with a 30.5 percent strikeout rate, a 9.0 percent walk rate and a 43.4 percent ground-ball rate in 14 starts — a total of 62 innings.

Pilkington wasn’t presently ranked among the White Sox’ top prospects, though that’s surely at least in part due to scouts not being able to get a look at him during 2020. He entered the ’20 campaign ranked 17th among Sox farmhands at Baseball America, and FanGraphs’ Eric Longenhagen tabbed him 21st in the system last year. BA’s 2020 report on the lefty noted that he lacks the “knockout repertoire” evaluators prefer to see but suggested he could still be a fifth starter. That type of profile is also the type that could tick up in the bullpen, of course, so it’s possible that’s where Pilkington ultimately lands. Given his age and success at the Double-A level, Pilkington is a relatively near-term addition for Cleveland.

The 25-year-old Johnson’s release comes after the 2015 fifth-rounder has struggled across three minor league levels in 2021. The South Carolina product has spent time at Triple-A and both Class-A affiliates in Chicago’s system but allowed a combined 23 runs (17 earned) in 16 innings of work.

The White Sox announced Friday that they’ve claimed righty Emilio Vargas off waivers from the D-backs and selected the contracts of infielder Jake Burger, right-hander Tyler Johnson and infielder Gavin Sheets. The moves leave the ChiSox with a full 40-man roster.

Burger, 24, was the 11th overall pick in 2017 and has had his career to date decimated by a series of left leg/foot injuries. Burger has twice torn the Achilles tendon in his left leg, and upon returning from that issue in 2019, a heel injury wiped out his entire season. He hasn’t suited up for a game since way back in 2017, the same year he was drafted, but the third baseman was a prolific college hitter who turned in a .263/.336/.412 slash with Class-A Kannapolis after being drafted.

According to Ryan Divish at the Tacoma News-Tribune, the Mariners released lefty Tyler Johnson last night. Johnson had been throwing for the Triple-A Rainiers and posted a rough 27.00 ERA in 2.2 innings.

The M's inked Johnson to a minor-league deal in February in hopes he'd develop into a lefty specialist, but he's suffered command issues in his recovery from recent arm surgery.

One of the seven free agent lefty relievers was plucked off the market today, as the Mariners signed Tyler Johnson to a minor league deal according to Geoff Baker of the Seattle Times.  Johnson, 27, was non-tendered by the Cards in December.  He missed the entire ’08 season with shoulder problems.  He held lefties to a .224/.307/.418 line in 2007.

10:05pm: Here is a list of players who were non-tendered today, and therefore became free agents.

Yesterday Joe Strauss wrote how the Cardinals’ #1 reasonable target for shortstop appears to be the Pirates’ Jack Wilson.  Today, Dejan Kovacevic confirms it and adds Matt Morris as another possibility to head to St. Louis.

Kovacevic notes that the Cardinals tried to acquire Morris last summer, though that wasn’t John Mozeliak.  The Pirates would have to be willing to eat some of Morris’ salary, though they would take on all of Wilson’s.  So far Anthony Reyes, Tyler Johnson, and Brad Thompson are named as the pitchers the Cardinals will trade.  I still have some hope for Reyes.

Kovacevic adds that the Bucs are in on Japanese reliever Kazuo Fukumori.  The Padres, Rockies, and Red Sox may also have Fukumori in their sights.